Butler Marrow Donor Encourages Others To "Be The Guy" 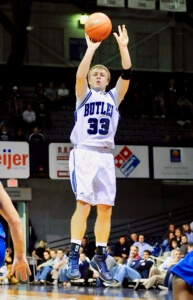 This Thursday marks the 29th annual State Farm Slam Dunk & 3-Point Championships that will feature 24 of the best collegiate dunkers and sharpshooters. Chase Stigall, a former Butler basketball player and marrow donor, is traveling to Phoenix for the event that is part of the NCAA Final Four festivities. Chase will have a chance to talk to the players about his donation experience and will also be recognized on the court during the live event.

The former Bulldog will feel quite at home. Chase was part of the back-to-back championship game teams in 2010 and 2011. He’s looking forward to speaking about his marrow donation experience with the college athletes. “I was just in their shoes,” says Chase. “Except one of my teammates is no longer with us.”
That teammate was Andrew Smith. At the age of 25, Andrew lost his battle with blood cancer.

Chase rallied along with the Butler community in honoring Andrew through Project 44, a partnership between Butler University and Be The Match®. Knowing that one in 430 go on to donate marrow, Project 44’s goal is to add 18,920 people to the registry so that they can save 44 lives. 44 was Andrew’s jersey number.

Last summer, Chase got the call that he was a match for a 2 year-old boy.

“I had no second thoughts,” says Chase. “I was just excited. I called Andrew’s wife to tell her that Andrew is still working to save lives while he’s up in heaven watching over us.”

For Chase, donating was simple and easy. “When I woke up, my lower back was sore,” Chase says. “I hurt more getting undercut during a Butler basketball game.”

Chase’s dream is for all Division I college athletes to join Be The Match Registry®.

“The best thing about donating is knowing that you are helping someone else,” says Chase. “You are giving that person the ability to hopefully overcome their sickness.”

The State Farm College Slam Dunk & 3-Point Championships is part of a series of sports-focused sponsorships Be The Match has partnered with, all in the hopes of getting committed young men to join the registry.

For more information about marrow donation, and the need for young men to join the registry, visit BeTheGuy.org.