Chemobrain—It's Real, It's Complex, and the Science Is Still Evolving

A review of the research documenting cognitive decline after chemotherapy indicates that the most common complaints have concerned learning and memory, processing speed, verbal and spatial abilities and executive function (planning and decision-making).

Interestingly, about half of the studies reviewed documented cognitive decline even before the initiation of chemotherapy. Cognitive impairment due to chemotherapy can significantly impair a patient’s quality of life. A recent review of 17 qualitative studies focusing on patients’ experience of chemobrain documented that patients reported fearing that they “were going crazy,” or developing Alzheimer’s. Patients noted they had difficulty learning and had to work harder to accomplish tasks. As a result, they were less confident in work and social situations.

Estimates vary on the prevalence and duration of chemobrain, due in part to timing of assessment and degree of impairment. A recent meta-analysis demonstrated that about 16 percent to 75 percent of breast cancer patients had moderate to severe impairment. As may be expected, deficits are most evident during treatment, with most patients returning to baseline within a few months of completing chemotherapy. However, a subset of patients has been found to have ongoing deficits, even after 20 years. Older patients with lower cognitive reserve at baseline are most likely to have higher levels of impairment. Co-occuring factors may also contribute to chemobrain. Approximately 30 percent of cancer patients experience depression, anxiety or distress during treatment, and depressed individuals score lower than non-depressed individuals on neuropsychological tests in attention, sustained attention, processing speed, recall, fluency, and speed of retrieval.

Fatigue, an almost universal symptom during and shortly after cancer treatment, may impair memory by decreasing attention, processing speed, and motivation. In addition, about 30 percent to 60 percent of cancer patients report having insomnia, which may cause poor concentration and memory.

What Is the Evidence Behind Chemobrain?

Although cancer patients have been reporting symptoms of cognitive impairment for many years, the first scientific studies began appearing in the mid-1990s. Some of the first studies began exploring the impact of particular chemotherapy protocols on cognition.

But as studies progressed, it seemed that more questions arose than were being resolved. There were so many confounding factors, such as age, hormonal status, baseline cognitive performance, educational level, genetic predisposition, comorbidities that impact oxygenation, depression, anxiety, fatigue, pain, anemia, time since treatment and dietary factors. How would it be possible to control for all those factors?

Thankfully, advances in neuroimaging have provided us with information that has moved the field forward. Functional MRI (fMRI) studies have documented that: Chemotherapy results in both cerebral functional and structural changes; the alterations correlate with complaints regarding impaired cognition and performance, and the alterations persist over time.

[Read "Lifting the Fog on Chemobrain" from CURE's summer 2011 issue]

Findings of several functional brain imaging studies have been reviewed by Reuter-Lorenz and Cimprich, and relative to “controls,” individuals treated with chemotherapy have been found to exhibit functional differences, including both areas of hyper- and hypoactivity during tasks, as well as differences in brain activity while the brain is at rest.

In addition, structural differences have been noted as well. Researchers compared brain images of women with breast cancer, some of whom received chemotherapy and some did not, and found decreases in volume and density of both white and grey matter in the group treated with chemotherapy. Chemotherapy-related reductions in grey matter have also been correlated with impairment in cognitive abilities.

Researchers have constructed a model detailing a proposed mechanism by which cancer treatment may lead to cognitive changes: Cancer treatment (chemotherapy but also including surgery, radiation treatment and hormonal therapy) combined with other clinical factors (inflammation, stress, fatigue, comorbidities and co-occurring symptoms) lead to cytokine dysregulation, hormonal changes and neurotransmitter dysfunction. This process, which may be moderated by baseline cognitive function, genetic variations, and age, combine to create cognitive changes. Researchers have put forth another model in which chemotherapy increases oxidative stress and inflammation, and decreases brain vascularization, neurogenesis and growth factors, and catecholamines.

These processes combine to decrease hippocampal function, leading to impaired learning and memory, and decrease frontal cortex function, which hinders planning and decision-making.

What Treatments Are Available?

The National Comprehensive Cancer Network’s Guidelines on Cognitive Function assert that despite increasing evidence of the validity of cancer-related cognitive dysfunction, there is limited evidence regarding treatment. Healthcare professionals are urged to validate patient concerns, provide education and to assess for contributing factors, including medications, depression, anxiety, pain, fatigue, substance abuse and sleep disturbance. Imaging studies are only recommended in specific situations. 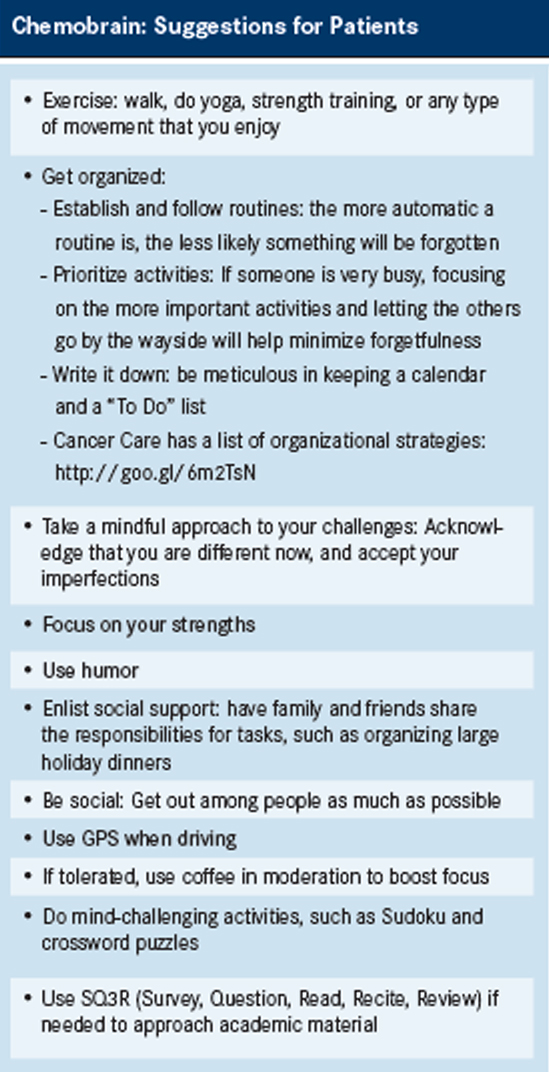 Although most patients eventually return to pretreatment baseline, a subset report significant impairment in quality of life, independence and self-confidence. One of the most important things physicians can do is to provide emotional support by listening to the patient’s concerns and validating the existence of chemobrain.
It is common for families, coworkers and friends (and sometimes even healthcare professionals) to not understand that the emotional, physical or cognitive effects of cancer treatment may linger after treatment has ended. In a review of treatments for chemobrain, researchers categorized treatment into pharmacologic and non-pharmacologic interventions. The review documented that so far there is no strong evidence supporting the effectiveness of medications for chemobrain. Trials have explored the use of psychostimulants and drugs used to treat dementia; however, results have been mixed, and further research is needed.

Erythropoietinstimulating agents have also been tested, but due to concerns with adverse effects, they are not recommended for this purpose. Despite advertisements touting the effectiveness of their own programs, currently no strong evidence exists that computerized cognitive training produces significant, lasting, cognitive benefits.

Thankfully, non-pharmacologic strategies are available, including exercise, mindfulness, social support, and organizational strategies (See Box). Perhaps the largest body of evidence supports exercise to boost cognitive function, although much of the research in this area has been conducted with noncancer populations. Several studies with cancer patients have documented the effectiveness of exercise, including Qigong, Tai Chi, physical fitness, and resistance training to alleviate the symptoms of chemobrain.

One review documented that structured cognitive training programs, addressing memory, attention and processing speed have been promising, but the programs are not generally available outside of clinical trials. One final note: A recent study found that loneliness increases the risk of cognitive problems among breast cancer survivors. Encouraging increased socialization for those at risk of being lonely may be helpful.

This article was adapted from a three-part series that appeared in Oncology Nursing News.
Chemobrain—It’s Real, It’s Complex, and the Science Is Still Evolving
Chemobrain Part 2: The Science Behind Chemobrain
Patient Recommendations for Chemobrain
Continue the conversation on CURE’s forum. >>
Talk about this article with other patients, caregivers, and advocates in the Breast cancer CURE discussion group.