From landmark Senate legislation to the Pink Lemonade Stand Challenge, here’s what is making headlines in the cancer space this week.
BY Alexandra Guadagno
PUBLISHED July 26, 2019
The United States Senate passed legislation this Tuesday, voting 97-2 to permanently fund the 9/11 Victim Compensation Fund (VCF). The VCF covers health care costs of first responders, volunteers and survivors who were hurt in the attacks and were expected to run out of money by the year 2020. The legislation would extend funding to 2092. It was a bipartisan effort and President Donald J. Trump is expected to sign.

Onlookers in the Senate Gallery included former “Daily Show” host Jon Stewart – a huge advocate for continued support of the VCF – and first responders that were affected by the attacks that took place on Sept. 11, 2001. Stewart and other onlookers stood and applauded when the vote surpassed the required threshold. Several senators, including New York Democrat Senator Kristen Gillibrand, who helped lead the endeavor, joined in the ovation from the Senate floor, reported ABC News.

Gillibrand said afterwards at a news conference, "Today is not a celebration. It’s a deep sigh of relief."

Gillibrand introduced Stewart as a “hero.” After a few jokes about the title, Stewart echoed her sentiments about the legislation passing. "This has been the honor of my life,” he said. “We can never repay all that the 9/11 community has done for our country. Today, they can exhale... There've been too many funerals. Too many hospices. These families deserve better.”

According to the US Centers for Disease Control and Prevention (CDC), an estimated 400,000 people are believed to have been exposed to toxic contaminants, suffered injury or trauma in Manhattan during the attacks. 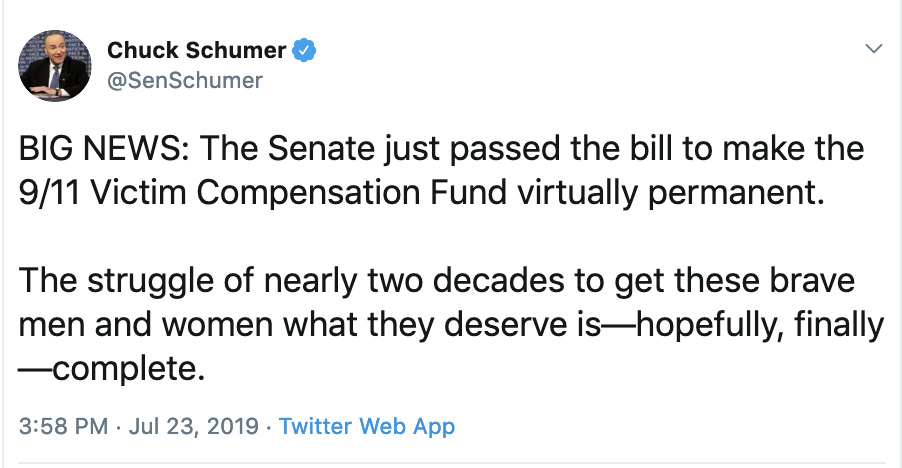 California resident Edwin Hardeman was awarded more than $80 million in a March jury verdict for his case associating his non-Hodgkin lymphoma to regular use of Roundup on his residential properties. Judge Chhabria said that the $75 million in punitive damages awarded to Hardeman by the six-person jury was excessive, compared with the $5.3 million in other damages, reported the Wall Street Journal. Judge Chhabria said that $20 million in punitive damages – approximately four times the compensatory damages awarded to Hardeman by the jury – was more suitable under U.S. Supreme Court guidelines.

Hardeman’s trial was the second of three trials in which an individual has been awarded a settlement linking Roundup to cancer. Bayer said on Monday that Judge Chhabria’s action in reducing the damages is a step in the right direction. Bayer still plans to appeal the verdict, as the jury’s decision opposes the scientific evidence and conclusions made by many worldwide health officials and regulators regarding the safety of Roundup.

Breast cancer survivor Darla Jaye was so excited about her last day of treatment at Harris Health System in Houston, Texas that she broke the "cancer free" bell while ringing it so powerfully.

"I couldn't even fathom being done, I was so overwhelmed yesterday," she said to CNN. "Guess I didn't know how strong I was!"

Jaye, who said she first received her diagnosis of breast cancer in February and had a fast-growing tumor. She originally thought she would have to endure chemotherapy, but her treatment plan ended up being 30 rounds of radiation. After her final session this past week, she excitedly broke the “cancer-free” bell in celebration.


"Even though I kind of knew what was coming, you don't really know when you lay down on a radiation bed getting ready for treatment," she said. "I am very, very grateful,” added Jaye, who credits her doctors at Harris Health System for saving her life.

“The now-widespread tradition was introduced in 1996 at MD Anderson,” says the MD Anderson website, “to symbolize the restoration of balance, harmony and life energy.” 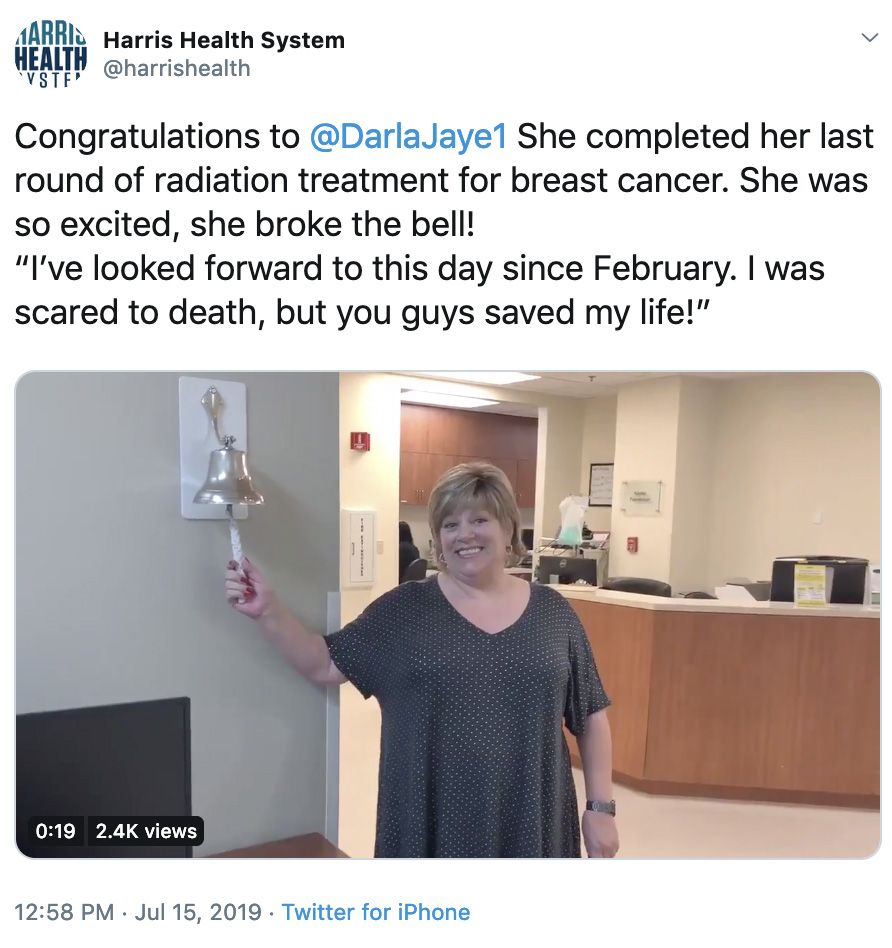 "These findings highlight the importance of tailoring free skin cancer screening events for non-white and younger populations," said Dr. Adam Friedman, interim chair of the Department of Dermatology at the GW School of Medicine and Health Sciences and director of the Supportive Oncodermatology Clinic at the GW Cancer Center and senior author on the study. "While free screening events are important, we also have to think about comprehensive, community-based solutions that reach broader demographic populations than skin cancer screenings alone."

The study was published in the Journal of Drugs in Dermatology and highlights the need for widespread, consistent skin cancer prevention guidelines. For example, the sun safety practices advocated for attendees at various skin cancer screening events differ from the general public, according to findings published by researchers from the George Washington University (GW) Cancer Center.


"This study also highlights the importance of reaching non-white populations with skin cancer prevention messages," added Friedman. "We have to address the myth that skin cancer only affects fair-skinned individuals. Skin cancer does not discriminate and therefore we need to encourage sun safety practices among all individuals."

A group of Miami children are doing their part to help fundraise for breast cancer research by setting up a pink lemonade stand and encouraging others to do the same, according to CBS Miami.

Brynne Rhodes’ mother was battling breast cancer in 2016 and wanted to do something to help find a cure for her mother. She took it upon herself and set up a pink lemonade stand to raise money for the Breast Cancer Research Foundation. Now, Rhodes has issued a challenge for her peers, requesting kids all over the United States do the same during this summer and take on the “Pink Lemonade Stand Challenge.”

A group of children in Miami have accepted her challenge, including Blaire Vazquez, age 6, and her book club are preparing to sell a whole lot of pink lemonade for a cause that hits particularly close to home for Vazquez.

“Cancer is out everywhere, my aunt has cancer, we want to end cancer,” said Blaire Vazquez.

Rosemary Carrera – Vazquez’s aunt – said, “I was diagnosed after my first mammogram when I turned 40.  I had no symptoms, no family history and it progressed quickly.” Carrera says her sister (Blaire Vazquez’s mother), Natalie Vazquez, has been a big support for her during her cancer journey and is her biggest champion.

“It definitely takes a village to go through it and we’re doing it,” said Natalie Vazquez. She has also been helping her daughter and friends with their lemonade stand signs, providing aprons and other supplies to help them set up their stand and take on the challenge.

The children will be at the Publix Supermarket across from the Miami Falls Shopping Center today, June 26, at 6:30 p.m., selling pink lemonade for breast cancer. All of the money they raise will go to the Breast Cancer Research Foundation.

Photo credit: @pinklemonadestandchallenge via Instagram.
Be the first to discuss this article on CURE's forum. >>
Talk about this article with other patients, caregivers, and advocates in the Breast Cancer CURE discussion group.