The breakthrough therapy program is designed to streamline drug development for therapies to treat serious and life-threatening illnesses. The FDA grants the status based on whether a therapy would provide a substantial improvement over existing options based on preliminary clinical evidence.

The Friends advocacy group helped promote the concept of speedier drug development that resulted in the program being signed into law in July 2012. As of late December, the FDA had granted 72 of 252 requests for breakthrough therapy status and awarded 16 approvals to agents that received the designation, according to the Friends group. (The FDA is not permitted to disclose information about the requests; available information comes from the drug companies). 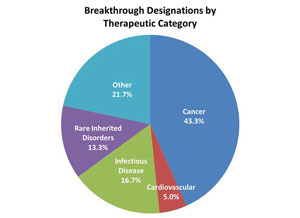 Overall, anticancer agents account for 43.3 percent of the breakthrough designations, leading all other therapeutic categories, according to Friends of Cancer Research. These are the cancer drugs and indications with breakthrough therapy status currently under evaluation:

Entinostat — A histone deacetylase inhibitor that is being examined in combination with the aromatase inhibitor (AI) Aromasin (exemestane) for postmenopausal women with locally recurrent or metastatic estrogen receptor (ER)–positive breast cancer whose disease has progressed after AI therapy.

Palbociclib — A CDK4/6 inhibitor that has shown positive results as a first-line treatment for women with advanced or metastatic ER-positive, HER2-negative breast cancer.

Keytruda (pembrolizumab) — Recently approved for advanced melanoma, this PD-1 immunotherapy agent has breakthrough status for NSCLC in patients who test negative for EGFR mutations and ALK rearrangements after disease progression on or following platinum-based chemotherapy.

Rociletinib (C0-1686) — The selective EGFR inhibitor is being looked at in NSCLC in patients with the EGFR T790M mutation after progression on anti-EGFR therapy.

Tafinlar (dabrafenib)—Approved for metastatic melanoma alone and in combination, this kinase inhibitor is also being examined in metastatic NSCLC in patients who test positive for the BRAF V600E mutation.

CTL019— Another CAR therapy, this one from Novartis and the University of Pennsylvania’s Perelman School of Medicine, being looked at for relapsed or refractory ALL in pediatric or adult patients.

Elotuzumab — A humanized IgG1 monoclonal antibody, this drug is being reviewed in combination with Revlimid (lenalidomide) and dexamethasone for the treatment of multiple myeloma in patients who have received one or more prior therapies.

Opdivo (nivolumab) — An anti-PD-1 inhibitor approved for melanoma, it also has breakthrough status in Hodgkin lymphoma after for the treatment of patients after failure of autologous stem cell transplant and Adcetris (brentuximab vedotin).

Volasertib — This is a PLK inhibitor tested in acute myeloid leukemia for patients aged 65 or older with previously untreated AML who are ineligible for intensive remission induction therapy.

Daratumumab— An anti-CD38 monoclonal antibody studied in multiple myeloma in patients who have received at least three prior lines of therapy and are double refractory to a proteasome inhibitor and an immunomodulatory agent.

Ibrutinib (Imbruvica) — If given the green light by the FDA, the Bruton tyrosine kinase inhibitor will be the first drug specifically approved for Waldenström macroglobulinemia, a rare type of non-Hodgkin lymphoma.

CRS-207 plus GVAX Pancreas — CRS-207 is a Listeria-based vaccine, and GVAX Pancreas is a vaccine that expresses granulocyte-macrophage colony-stimulating factor and mesothelin. The combination immunotherapy treatment was given breakthrough status for metastatic pancreatic cancer.

MPDL3280A — The anti-PD-L1 monoclonal antibody is being studied in metastatic urothelial bladder cancer.

Additional reporting by Elizabeth Whittington.
Be the first to discuss this article on CURE's forum. >>
Talk about this article with other patients, caregivers, and advocates in the General Discussions CURE discussion group.