Oncology on Canvas Art Competition Inspires Those Impacted by Cancer

A competition and mural project allow those affected by cancer to express themselves through art.
BY Elizabeth Whittington
PUBLISHED November 21, 2014
Susan Hope Schaffer’s mother encouraged her to develop her artistic talents at a young age, but she never took it seriously until after she was diagnosed with breast cancer in 2004. What began as an experience filled with fear, pain and anguish, says Schaffer, eventually brought “hope and energy” to herself and others through her artwork.

This year, Schaffer was rewarded for those efforts through the Lilly Oncology on Canvas art competition. She was named this year’s overall winner and a donation was made to her selected charity. To date, the contest has had more than 4,500 applicants.

“They gave me a voice to tell parts of my journey,” says Schaffer, who began submitting her artwork to the competition in 2008. She says creating art out of her cancer experience has given her a sense of purpose. She has since donated several of her pieces to local cancer centers and hospitals.

Schaffer’s winning piece, "Visions of Hope," highlights how her medical team, family and other cancer survivors gave her hope through her diagnosis and treatment. 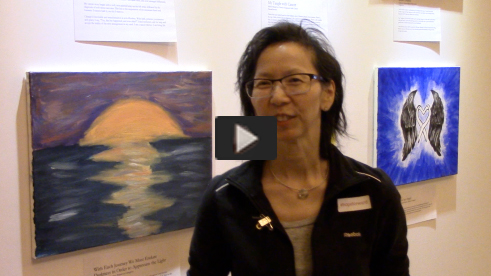 Susan Hope Schaffer describes how her artwork has evolved over the years since her breast cancer diagnosis.

"My cancer journey has gone from some pain and anguish to a beautiful result, and that's the artwork that I've created," says Schaffer. "Visions of Hope," along with other submissions to this year's competition, will be on display throughout the United States in a traveling art exhibit.

Lynnea Washburn, a survivor of lymphoma, and Dennis Holliday, who was impacted by the death of a close friend from cancer, were awarded second and third places, respectively.
As part of their award, the three winners were invited to New York to attend a Lilly Oncology on Canvas event and art exhibit, where other submissions were displayed.

“You can feel it, that’s what’s so great about artwork. You can feel what they’re trying to represent,” Holliday says of the dozens of other artists featured that day. “You can feel almost every drawing and painting.” 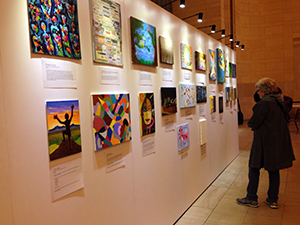 Individuals at New York's Grand Central Terminal were offered the opportunity to view some of the selected artwork submitted to this year's Lilly Oncology on Canvas competition.

In recognition of the 10th anniversary of the Oncology on Canvas art competition, Lilly Oncology and the National Coalition for Cancer Survivorship created The Hope Murals Project. The idea behind the project is to allow anyone who has been affected by cancer to help paint a series of 10 murals developed by artists who have previously submitted artwork to the competition.

Ten cities around the United States and Puerto Rico were selected as the locations for mural painting events and installations. On Oct. 23, New York City became the ninth stop of the tour, where the art exhibit and mural painting project were housed at Grand Central Terminal.

New York artist and gastrointestinal stromal tumors (GIST) survivor Ellen Mayer was on hand to see her original piece, “Balancing Act,” become a large-scale version of a paint by number. Members of the public were invited to help paint any of several four-by-six-foot canvases. Once completed, the pieces will be joined together to create a 12-by-20-foot mural and installed in a central New York location. Other Hope Murals have been installed in playgrounds and parks, and on the sides of buildings.

“It's amazing, it's exciting and it's a little overwhelming,” Mayer says, looking over the area where several people gathered to paint the many pieces of “Balancing Act.” “As an artist, you always want to be famous, but it ended up that now I’m known not only for my art, but also representing cancer.”

She welcomes the opportunity to use her talent and newfound fame to promote awareness of GIST, a rare soft-tissue cancer of the digestive tract. “Now I’m this voice, standing here in Grand Central Station and able to talk about this disease.” 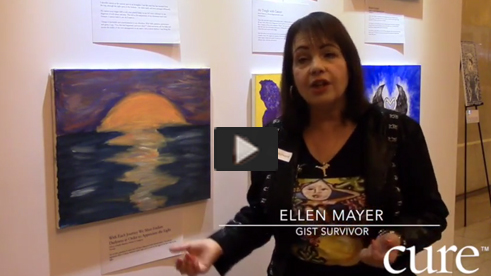 Ellen Mayer painted "Balancing Act" in 2010 to help describe how she felt about her cancer experience and survivorship, including the constant need to balance emotions that come with the fear of recurrence.

Andrew Wiersma, with Lilly Oncology, said those involved with the event and competition feel honored that so many people have shared their journeys through Oncology on Canvas.

“Back in 2004, we recognized that there was a need to not only provide medicines, but to provide emotional support for everyone touched by cancer—caregivers, doctors, nurses. Anyone who is touched by the disease is emotionally impacted. So, we wanted to offer something to let individuals talk about their journey, and the way we’ve done that is through art and narrative,” he said. “We feel so fortunate to give the community this opportunity.”

Schaffer can attest to the fact that creating artwork for the competition has allowed her to grow as an artist and a survivor. Her submission “Awaken” from 2010 was also chosen as the Hope Mural Project for Philadelphia.

“It was created at Fox Chase Cancer Center on September 18, 2014—one day shy of my 10-year anniversary,” she says. “It has been installed at the Fox Chase train station in Philadelphia.  It looks amazing when you step off the train to see this beautiful, colorful, bold mural. What is represents, out of the gray of cancer, morphed a beautiful life, a reason, a purpose.”

Outside the competition, Schaffer has been finding additional ways to use her artistic skills to help others going through cancer. “I also want to paint other people’s stories,” she says, and has been interviewing patients, survivors and those in hospice care to personalize each piece of art to her subject. “What I do is take pictures of their eyes, then take their words and incorporate them into the painting.” 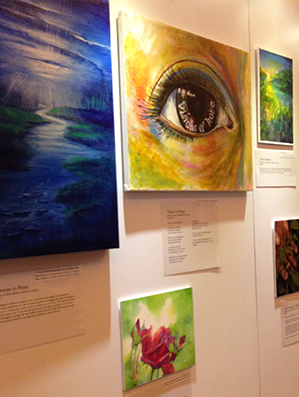 Be the first to discuss this article on CURE's forum. >>
Talk about this article with other patients, caregivers, and advocates in the Gastrointestinal stromal tumor CURE discussion group.