Every day, breast cancer researcher Edith Perez sets her mind on finding better treatments for the disease and conducting research aimed at improving patients' lives.
BY
PUBLISHED January 29, 2015
Coping with challenges is part of the human condition, but self-awareness can have far-reaching results. Just ask Edith A. Perez, breast cancer researcher and director of the Mayo Clinic’s Breast Cancer Translational Genomics Program in Jacksonville, Fla.

Every day, she sets her mind on finding better treatments for the disease and conducting research that will help others in the oncology community move forward with science aimed at improving people’s lives. 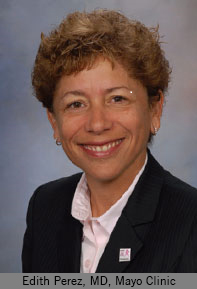 Much, although not all, of her work has concentrated on the study of compounds designed to fight HER2-positive breast cancer, which led to a 2005 discovery that changed the way the disease is treated. A study Perez led and helped design showed that the use of Herceptin (trastuzumab), a monoclonal antibody that selectively binds to the protein alteration of HER2, in concert with chemotherapy—rather than chemotherapy alone—resulted in a 52 percent decrease in the recurrence of HER2-positive breast cancer in patients who had undergone surgery for the condition, and improved their survival by 33 percent.

“It was a real breakthrough for patient management, and I knew it would apply to thousands of patients in the United States and throughout the world,” says Perez. “We presented those data at the largest meeting ever of the American Society of Clinical Oncology, with about 16,000 people in attendance,” Perez recalled.

More importantly, she realized that “not too many physicians have the opportunity to affect that many lives to this degree, no matter how dedicated they are or how incredibly good their ideas. To see the eyes of the patients, and their gratitude for the results of the work that we have done, is very humbling, and it has been quite powerful.”

Using tumor and blood samples collected during the study, Perez and her colleagues have continued to consider the potential applications of Herceptin. “I routinely explore things that I hope will be more efficacious and will lower toxicity,” Perez says, “because that’s huge for people’s lives.”

Many Roles at Mayo Clinic

Perez accomplishes that through a variety of roles at Mayo Clinic, including her role as director of the Breast Cancer Translational Genomics Program. For more than two years, she has served as deputy director at large of the Mayo Clinic Cancer Center based in Rochester, Minn., and also is director of the institution’s Breast Specialty Council. The council brings together researchers from all Mayo Clinic sites to review research opportunities related to breast cancer prevention, treatment, and survivorship.

She is a Serene M. and Frances C. Durling Professor of Medicine at the Mayo Medical School; the first Mayo Clinic physician to serve on the Board of Scientific Advisors of the National Cancer Institute; and in 2007, was given her institution’s top honor for investigators when she was named a Mayo Clinic Distinguished Investigator.

Finally, Perez helped launch a fund-raising marathon called 26.2 with Donna, which led to the January 2009 creation (and continued funding) of Mayo’s Breast Cancer Translational Genomics Program, which aims to unravel, categorize and catalog relevant molecular alterations present in breast cancer. The goals of the work include gaining a better understanding of what drives the disease’s growth, learning what may predict sensitivity or resistance to different treatments, and identifying targets that can be used to develop new treatments, according to Perez.

The 26.2 with Donna, which also goes by the name the National Marathon to Finish Breast Cancer, also includes a 5K, a half-marathon and a relay. It attracts more than 10,000 participants, ranging from patients to elite runners, and helps raise funds not only for genomic research but also for underserved women diagnosed with breast cancer.

Research Part of Her Hectic Race

Her myriad roles make for a whirlwind schedule of workdays that stretch to 10 hours or more. In addition to her clinical trial and translational laboratory work, Perez’s schedule includes organizing, attending and speaking at meetings all over the globe; participating in conference calls; conducting grant reviews on behalf of the National Institutes of Health (NIH); advising scientists and companies throughout the world on studies, research and patient care; writing manuscripts; mentoring younger scientists; and making videos for posting on YouTube to explain her current research.

Perez also heads Mayo Clinic teams in conducting basic research projects funded by the NIH, including one focused on tissue biomarkers for responsiveness to adjuvant Herceptin, and another aimed at understanding the role of the immune system in response to anti-HER2 therapies—Herceptin, Perjeta (pertuzumab) and Tykerb (lapatinib)—in adjuvant, neoadjuvant and metastatic settings. In large part, the projects involve analyzing the proteins and genes in tissue and blood specimens and correlating them with patient outcomes.

Perez also sees patients, although infrequently, including a few who periodically return for follow-up care, and new patients who are seeking second opinions about diagnoses. Seeing patients routinely would be difficult, Perez says, because of her travel schedule. Those she has treated, though, remain fixed in her memory.

“Some of their stories are really amazing,” Perez says. “I just respect what they have to go through, because most of them thought they were healthy until, one day, this happened to them.”

Perez was moved recently when she received an email from a widower of a former patient. “She died before Herceptin was available, and I thought, ‘If she had lived a few more months, we would have had this novel treatment,’” Perez recalled. “This kind of experience has served as my inspiration all these years. Whenever I see a patient, I wonder, ‘Is this the patient I’m going to help next?’”

Before moving to Mayo’s facility in Jacksonville, Perez spent six months working at the institution’s Rochester, Minn., location, where she devoted mornings to laboratory research and afternoons to patients. In Mayo’s laboratory, her focus was combinatorial chemistry, Perez recalled, “treating cancer cells with different medicines or new compounds and seeing how you can best kill tumor cells—is it best to combine medicines or use [just] one? These are ideas I carry today when I do lab bench work that can be translated into clinical trials.”

Since moving to Jacksonville, Perez has bolstered Mayo’s breast cancer program by attracting continuous grant funding from Evelyn Lauder’s Breast Cancer Research Foundation, becoming a founder of the genomics center, and helping to make numerous discoveries about the mechanisms of the disease.

For instance, “Many people thought that the more copies a patient had of the HER2 gene, the better their response would be to Herceptin,” Perez says. “But we found that, up to a threshold, more copies of the gene didn’t make for a better outcome.”

Perez is proud of the progress she has made during her time at Mayo Clinic, and she is eager to build on it. “I love what I do, and I want to do more,” she says.