Greg continues his treatment journey for GBM.
PUBLISHED August 24, 2016
Greg Cantwell was 30 years old when he was diagnosed with a glioblastoma multiforme (GBM), a primary brain tumor. Even though Greg had the support from his family and friends, he didn't know anyone that could relate to his fight or who had conquered the same type of cancer. Since founding his non-profit, Greg's Mission, in 2012, he has helped over 1,700 patients, families and caregivers to navigate the brain tumor journey. 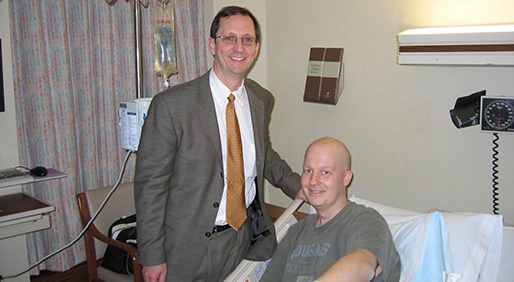 Greg and his neurosurgeon
Just to recap, my three choices for treatment in 2004 were:

1. Do nothing and enjoy a good quality of life for the time I had left.

2. Have surgery, radiation and Temodar, then continue with the standard of care.

3. Have surgery, which included a treatment during the tumor resection, radiation, and Temodar, then a cocktail approach using carboplatin administered intra-arterially in conjunction with cytoxan and etoposide given through a port in my chest.

I chose number three. Making the decision to go with the most aggressive treatment was not made lightly. The goal, ultimately, was longevity. I also understood that choosing this aggressive treatment had the potential to make me the sickest, but it was worth it if it gave me a better chance at being able to see my son grow up.

I was told that my surgery would be on Monday morning. I tried to make the best out of the weekend prior to surgery, as it was unknown what I would feel like or be able to do after surgery. As I am sure you can imagine, I got very little sleep that weekend. I never had surgery before, so I didn’t know what anything would feel like. I just remember thinking to myself, I hope they give me enough anesthesia to keep me asleep so I don’t feel anything.

Monday morning arrived and felt like it came way too soon. I got to the hospital early in the morning. I got checked in and went down to pre-op. I remember my family and best friend Jeff being there as each person took their turn telling me that they would see me later. Scared and teary-eyed, I began the journey down the hall. I don’t even remember getting to the operating room. I was out cold. The next thing I remember was waking up in the intensive care unit. I was able to move my arms and legs and I was able to speak and swallow. I remember checking to see if the doctor did as I asked and remove the catheter while I was still under. He did. I was happy about that, but it turned out that was the worst decision I made. I tried for seven hours to go to the bathroom. Meanwhile, my bladder was filling up like a balloon. The nurse confirmed that with an ultrasound, but I didn’t need any confirmation; I knew I had to pee like a Russian racehorse, but I couldn’t do it for the life of me. So guess what happened next? I had to have the catheter put back in. After I was drained, I was able to go to my room on the floor where I would see my family again. 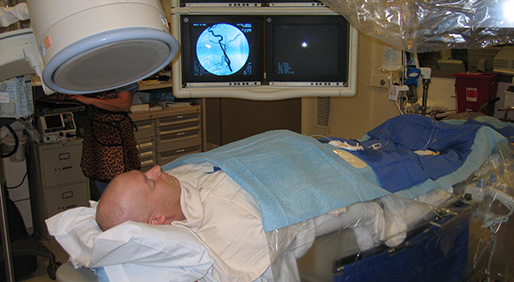 When I arrived at the room, I was so happy to see everyone again. At that point, someone told me that the neurosurgeon came out after surgery and told everyone that he didn’t know what to expect and that I would have to wake up before they would know for sure whether I would be able to move my arms or legs, be able to talk or have any any disabilities. I don’t remember being in any pain from the surgery, but I do remember telling them that I didn’t need any pain meds.

The following morning, the neurosurgeon came in and told me that he was able to resect the tumor and implant five Gliadel Wafers. He explained to me that these were chemotherapy wafers that provide direct chemotherapy to the leftover cancer cells and that they will dissolve after two-and-a-half weeks. I was then greeted by the radiation oncologist who explained that in about three weeks, I would be seeing him to make a mask and get started on my six weeks of radiation. Then, as if this wasn’t overwhelming enough, my neuro-oncologist came in to talk to me and explained to everyone what the treatment that I chose will consist of. He explained that I will be taking Temodar (temozolomide), an oral chemotherapy, in conjunction with my radiation treatments for six weeks. After six weeks, I’d have three weeks to rest. Then the real treatment will begin. He said we will discuss that at my next appointment with him in about a month.

I was up and walking around, able to keep food down, and going to the bathroom by myself that same day. I was released from the hospital within 72 hours after surgery. I remember going to the Mall of America to get exercise with staples still in my head and wearing a mask over my nose and mouth to protect me from germs. The staples were removed 10 days later. A month later, I had my mask made, did a baseline MRI and began the radiation treatments. I also had an appointment with my neuro-oncologist. At this appointment, he went over the treatment plan that I had chosen, which the doctor and I felt would give me the best chance at longevity.

My treatment would consist of two nights and three days in the hospital where I would receive cytoxan and etoposide through a port placed in my chest, as well as the intra-arterial carboplatin which was done in the interventional radiology lab. This is where the real part of my proactive treatment came in. The carboplatin would be administered through a catheter, which was inserted into the femoral artery in my groin, and threaded all the way to my brain, and released directly on the resected tumor site and the leftover cancer cells. This was key, as it got the concentration of chemotherapy to where it needed to be.

Having proactive doctors who give you a personalized treatment plan is key. Very aggressive tumors such as a glioblastoma multiforme (GBM) require very aggressive intervention to give you the best chance at longevity. Also, you need to remember that you are the patient. Advocate for yourself; it’s your life. You are the number one person on your health care team.

In closing, I am here for anyone who wants to reach out. My website is www.gregsmission.org I am now a 12-year survivor of a GBM and still going strong!!!
Be the first to discuss this article on CURE's forum. >>
Talk about this article with other patients, caregivers, and advocates in the Brain Cancer CURE discussion group.