Medical Marijuana: Smoking Out the Evidence

Member
558 Posts
August 24, 2015
Medical marijuana has, in recent years, received more attention from voters, regulators, legislators and media than perhaps any pharmaceutical, and it has been approved for use in much of the nation.

Patients with cancer might therefore assume that doctors would thoroughly understand its benefits and drawbacks, and that the health care system would distribute it as efficiently as any other controlled treatment.

They would, however, be gravely mistaken.

Research within the United States on marijuana’s ability to control pain, combat nausea or stimulate appetite in patients with cancer ranges from thin to nonexistent.

“It’s hard to believe that we have so few good studies of a substance that has been used as a medication for thousands of years, but cannabis has long been a very difficult thing to study,” said Donald Abrams, an oncologist at the University of California San Francisco who has conducted a number of the peer-reviewed studies that do exist.

“The biggest obstacle has long been the government’s decision to classify cannabis as a dangerous substance with no medical uses, which has made it virtually impossible to get funding or materials for research. The government has relaxed its stance on research in recent years, but public funding has still been modest, and private companies do not finance research into common plants.

“Even when researchers get studies funded, we consistently struggle to get patients. I suspect that’s mostly because all cannabis studies are inpatient studies — the federal controls on cannabis make it nearly impossible to design an outpatient study — and no one wants to commit to living in a hospital, typically without access to visitors.”

A Sparse Body of Evidence

The earliest effort to test marijuana’s anecdotal reputation for pain reduction seems to date to 1975, when researchers had 32 subjects smoke cannabis to see if it increased their ability to endure a metal rod pressing down upon their thumbs. It did.

Unfortunately, follow-up research has been sparse. Indeed, the Journal of the American Medical Association (JAMA) just published an article that attempted to summarize all quality research on the medical effects of cannabis and cannabinoids, and its authors found just two studies that examined whether inhaled cannabis eases pain.

The first of these, which was conducted by Abrams, gave 50 HIV patients either three marijuana cigarettes or three placebo cigarettes every day for five days. (Researchers made the placebos convincing by removing the active ingredients, but not the distinctive smell or taste, from actual marijuana.) The actual cannabis reduced the daily neuropathic pain that patients reported by 34 percent, while the placebo reduced it only 17 percent.

A research review that appeared last year in CA: A Cancer Journal for Clinicians — a review with somewhat wider inclusion criteria — found seven other papers that measured the effects of cannabis on pain. Of those, four explored whether a single dose of cannabis increased the ability of patients to withstand pain that was induced in the lab. The other three tested cannabis on patients with HIV or a variety of conditions. All of them found that cannabis relieved pain, at least at certain doses, but all were small studies of short duration.

Peer-reviewed papers that study marijuana’s effects on chemotherapy-induced nausea and vomiting are even harder to find. The JAMA analysis found none that met its inclusion criteria. The CA review found that two, which appeared in 1979 and 1981, provided data on a total of 23 subjects and conflicted with each other. The first of those studies found that smoked cannabis reduced nausea and vomiting in 14 of 15 patients who were using methotrexate to treat cancer. The second found no benefit in any of eight patients whose chemotherapy combined doxorubicin and cyclophosphamide.

Looking beyond established medical journals, trials conducted by five state governments found that smoking cannabis tended to help more than 600 chemotherapy patients control nausea and vomiting better than either no treatment (two studies) or ingesting a purified version of the most active ingredient in cannabis, a chemical called delta-9-tetrahydrocannabinol (THC). That said, the one state study that compared smoking marijuana to using an existing nausea drug found that the cannabis worked no better than the nausea drug, thiethylperazine.

There is some evidence that inhaled marijuana can spur HIV patients to eat more and gain weight, but only a pair of trials with 40 total subjects. Other evidence came in the form of a questionnaire filled out by 523 HIV-positive outpatients, 27 percent of whom said they had used marijuana; of those, 97 percent said the drug had improved their appetites. However, there are no papers that study the issue in cancer patients.

Another potential positive effect of marijuana may be the ability to prevent or at least impede certain types of cancer. One 2013 study, for example, found that marijuana users had a small but statistically lower risk of bladder cancer compared with people who smoked tobacco or did not smoke. And while another study found that long-term use of marijuana may increase the risk of tumors in the head and neck, a separate study showed that marijuana use reduced that risk. Further, a large 2006 study demonstrated that smoked marijuana did not cause lung cancer, and might even offer a protective effect against the disease.

Still, potential long-term risks may be of less concern to patients who have cancer than the adverse effects associated with short-term use.

Cannabinoids can activate cell membrane receptors in the body, affecting function, sensation or mood. These cannabinoids come from within the body, from plants, or are synthetic. Of those that come from plants, there are three types: These can interact with one of two known types of cannabinoid cell membrane receptors in the human body (there is some evidence that others exist, too). CB1 receptors are primarily found in the brain and central nervous system (CNS), while CB2 receptors are primarily found in the immune system. Both can be found in some peripheral organs. 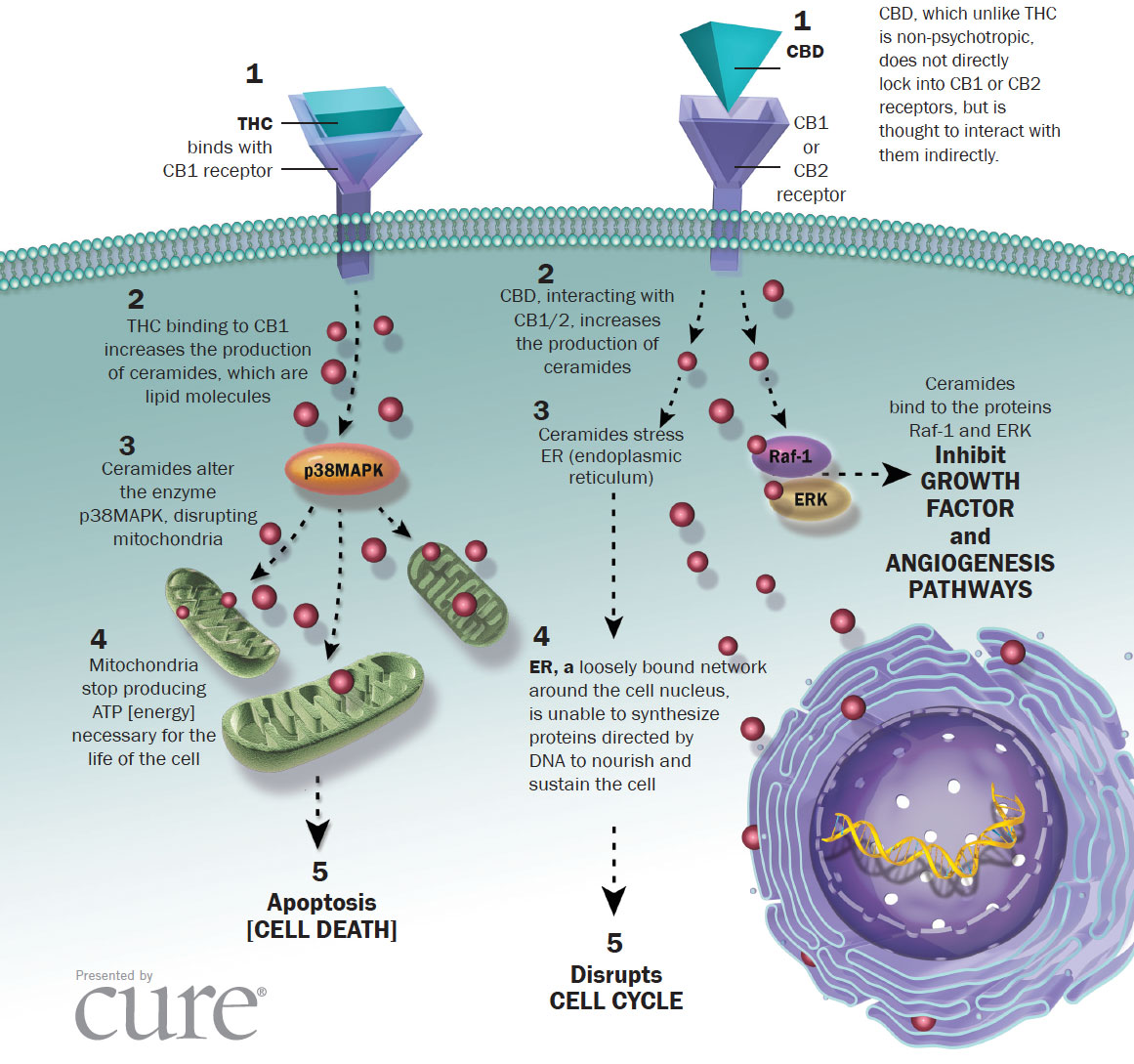 
What's a Patient to Do?

Although a large 2012 study showed that moderate smoking of marijuana doesn’t cause long-term damage to the lungs, smoking the drug (or nearly anything else) can irritate the lungs in the near term. It also can elevate blood pressure (although some studies show it actually eases hypertension in the long term), and increases heart rate enough that it should not be used by people with a history of heart disease. Other adverse effects experienced by some users include paranoia, anxiety, irritability, lethargy and dependency. Also not to be ignored is a mild and temporary cognitive impairment, which, if smokers get behind the wheel, may increase the risk of traffic accidents.

Those risks, along with the dearth of studies demonstrating medical benefit, the poor quality of some studies that do indicate medical benefit and, of course, the continued presence of federal restrictions on marijuana, have typically prevented medical organizations or associations from endorsing the use of medical marijuana.

The official position of the American Cancer Society leans toward the more permissive end of the spectrum by leaving it up to individuals: “Medical decisions about pain and symptom management should be made between the patient and his or her doctor, balancing evidence of benefit and harm to the patient, the patient’s preferences and values, and any laws and regulations that may apply.”

Effect of Cannabinoids on Appetite, Pain and Nausea 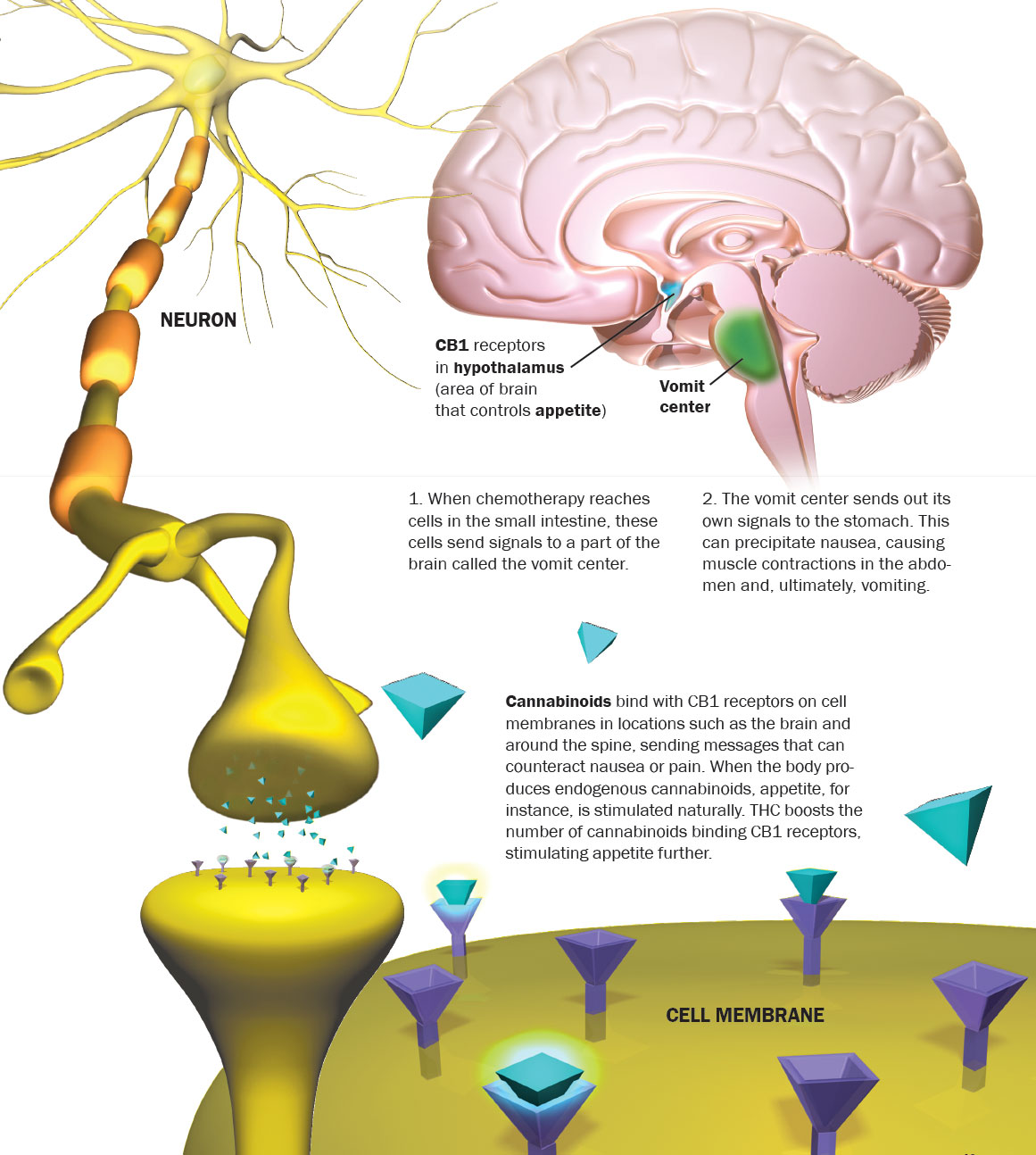 An editorial from the JAMA issue that reviewed the evidence on cannabis and cannabinoids takes a more pragmatic position: “If the goal is to make marijuana available for medical purposes, then it is unclear why the approval process should be different than that used for other medications. Evidence justifying marijuana use for various medications [should] require adequately powered, double-blind placebo/active controlled clinical trials to test its short- and long-term efficacy and clinical safety.”

Cancer patients who would prefer to use rigorously tested medications to treat any combination of pain, nausea, vomiting and lack of appetite have plenty of options to try before cannabis — including medications derived from cannabis.

(A third cannabinoid medication called nabiximols — an oral spray that mixes THC and cannabidiol in a one-to-one ratio — has been approved in Europe and Australia to treat cancer pain and is undergoing trials in the U.S. A number of other cannabinoid medications, moreover, are at early development stages around the world.)

Neither Cesamet nor Marinol have been specifically approved to treat cancer pain, but because they are legal medications, they have been used in far more trials than actual cannabis and there is far more evidence that they can reduce cancer pain in certain circumstances. (Doctors can prescribe, and patients can take, approved medications for off-label uses, if there is at least some supporting evidence.)

“The research on actual cannabis — the whole leaf taken directly from a plant — is tiny. The research on isolated cannabinoids that are extracted from cannabis plants or synthesized, however, is much more plentiful,” said Penny Whiting, the lead author of the JAMA analysis.

“In general, the quality of these studies is not very high. Most of them have an unclear or high risk of bias, mostly because of incomplete outcome data (and the limited numbers of subjects, which dimishes the certainly of the results). Still, taking the studies together, there is moderate quality evidence that cannabinoids are effective therapy for neuropathic pain, nausea and vomiting.”

Of course, there are many other options for controlling nausea, vomiting and pain. (There are not so many medications that prevent weight loss.) Pain management is an entire specialty of its own, and cancer patients with persistent pain should see a specialist. Large cancer centers tend to have specialists on staff. Small oncology practices rarely do, so patients must sometimes find specialists on their own.

That said, severe pain often defies all conventional treatment — or the treatment proves worse than the underlying problem. In such cases, in places where it’s legal, marijuana may make sense.

“People have been using cannabis as a medicine for several thousand years,” says Abrams, the oncologist from UCSF. “The trial data is weak, but it’s hard to find much better anecdotal data than that.”

Member
0 Replies
August 28, 2015
This lack of research or more exactly the lack of "permission" to conduct studies results from an overreaching federal government that believes it has the right to determine what its subjects can and cannot ingest into their own bodies.
vancrideout

Member
0 Replies
January 23, 2020
Cannabis oils are generally deemed safe the chemicals and ratios of each cannabis oil vary, but this can irritate your lungs. Plus, experts still aren
dwilliams

Member
0 Replies
February 04, 2020
Thank you for that useful information about CBD. You may also want to check over here https://ultrazencbd.com/cbd-oil-benefits/ to see the wonderful benefits you can obtain from CBD oils. That's all