Started by anonymous, October 02, 2015
1 reply for this topic
anonymous

N/A
N/A
October 02, 2015
A few weeks ago, I was asked to write for CURE and to be totally honest, I didn’t know that I wanted to do it. I started a blog eight months after Molly was diagnosed and, at that time, I found writing to be therapeutic. But as time went by and the reality of cancer kicked in, I didn’t want to write about it anymore.

On my first article we talked about the new normal that my family was thrown into at the height of our lives. This was a very difficult period and writing about it brings back many mixed memories. So why write again? As my friend Deanna said, it is "the right thing to do."

From the time of Molly was diagnosed, people asked if she smoked. This was a tough question. Molly never smoked or lived in a smoking house, but the fundamental of this question is wrong. If the answer was yes, would that make it OK that she was sick? Heart disease is the leading cause of death in the U.S., but people seldom ask if the patient ate french fries for breakfast!

It is hard to get mad at people for believing that lung cancer is a smoker’s disease. I believed the same thing before we knew better. The smoking stigma was created to deter people from smoking, but the collateral damage has been that patients being blamed for their own disease. Lung cancer is one of the lowest funded cancers despite being the deadliest cancer.

Fighting this stigma was the no. 1 reason why we opened our private lives to cameras and why I decided to write again. Again, as Deanna said, it is "the right thing to do."

Today, as I am typing this article another wife lost her husband and three children lost their father. I dare you to look in their eyes and ask them if their father smoked. 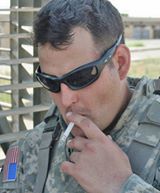 Member
0 Replies
October 04, 2015
JOINT STATEMENT ON THE RE-ASSESSMENT OF THE TOXICOLOGICAL TESTING OF TOBACCO PRODUCTS" 7 October, the COT meeting on 26 October and the COC meeting on 18 November 2004. http://web.archive.org/web/20090412022844/http://cot.food.gov.uk/pdfs/cotstatementtobacco0409?hc_location=ufi "5. The Committees commented that tobacco smoke was a highly complex chemical mixture and that the causative agents for smoke induced diseases (such as cardiovascular disease, cancer, effects on reproduction and on offspring) was unknown. The mechanisms by which tobacco induced adverse effects were not established. The best information related to tobacco smoke - induced lung cancer, but even in this instance a detailed mechanism was not available. The Committees therefore agreed that on the basis of current knowledge it would be very difficult to identify a toxicological testing strategy or a biomonitoring approach for use in volunteer studies with smokers where the end-points determined or biomarkers measured were predictive of the overall burden of tobacco-induced adverse disease." In other words ... our first hand smoke theory is so lame we can't even design a bogus lab experiment to prove it. In fact ... we don't even know how tobacco does all of the magical things we claim it does. The greatest threat to the second hand theory is the weakness of the first hand theory.