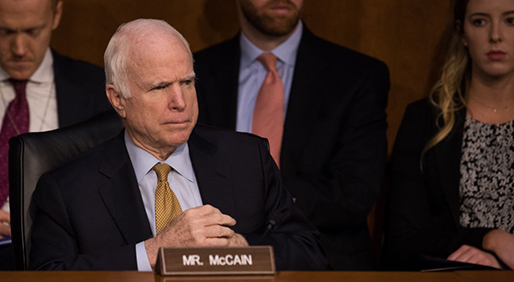 Sen. John McCain (R-AZ), listened as former FBI Director James Comey testified in front of the Senate Intelligence Committee, on his past relationship with President Donald Trump, and his role in the Russian interference investigation, in the Senate Hart building on Capitol Hill, on Thursday, June 8, 2017. (Photo by Cheriss May) (Photo by Cheriss May/NurPhoto via Getty Images)

Senator and former presidential candidate John McCain was diagnosed with the brain cancer glioblastoma after undergoing surgery to remove what doctors originally thought was a blood clot at the Mayo Clinic in Phoenix this Friday.

McCain, 80, went in for a routine exam on Friday morning, where he told health care professionals that he was suffering from fatigue and was experiencing some double vision. After getting a brain CAT scan and an MRI, doctors saw an abnormality in the front-left part of his brain and went in surgically to remove it. Upon inspection after it was removed, they found that it was a primary glioblastoma — an aggressive tumor type that originates in the brain and makes up about 15.4 percent of all primary brain tumor diagnoses, according to the American Brain Tumor Association (ABTA).

“Scanning done since the procedure (a minimally invasive craniotomy with an eyebrow incision) shows that the tissue of concern was completely resected (according to) imaging criteria,” a release from the Mayo Clinic said. “The senator and his family are reviewing further treatment options with his Mayo Clinic care team. Treatment options may include a combination of chemotherapy and radiation.”

Additional treatments approved for use in glioblastoma include the targeted drug Avastin (bevacizumab), a medication that can prolong life in some by interfering with the growth of blood vessels that feed tumors. Also approved is Optune, a device worn on the head that delivers tumor-treating electrical fields. Because the five-year survival rate for patients with glioblastoma is less than 10 percent, new treatments are needed; those being investigated in clinical trials include immunotherapies and viral therapies.

Doctors on McCain’s treatment team commented that he is recovering “amazingly well” from his surgery, and that his “underlying health is excellent.”

According to a statement from McCain’s office, “Senator McCain appreciates the outpouring of support he has received over the last few days. He is in good spirits as he continues to recover at home with his family in Arizona. He is grateful to the doctors and staff at Mayo Clinic for their outstanding care, and is confident that any future treatment will be effective. Further consultations with Senator McCain's Mayo Clinic care team will indicate when he will return to the United States Senate.”

Since making the news public, McCain has received an outpouring of support on social media from Democrat and Republican citizens alike, as well as from fellow political leaders.

“John McCain is an American hero & one of the bravest fighters I've ever known. Cancer doesn't know what it's up against. Give it hell, John,” tweeted former President Barack Obama.

A statement from President Donald Trump read, “Senator John McCain has always been a fighter. Melania and I send our thoughts and prayers to Senator McCain, Cindy, and their entire family. Get well soon.”
Print | cure Printing...