http://www.curetoday.com/publications/cure/2015/colorectal-cancer-special-issue/care-package
Care Package
Robert Stern
Robin Dubin didn’t easily think of herself as her husband’s caregiver, despite having been first thrust into that role when Dave Dubin was diagnosed with stage 3b colon cancer. The year was 1997. The Dubins, both 29, had a 15-month-old baby boy, Zachary, and had recently moved into their first house.

“We went through the standard reaction of, ‘Why me?’” Dave recalls.

One answer: Statistically, colorectal cancer— cancer that develops in the colon or rectum—is the third most common cancer in the United States, according to the U.S. Centers for Disease Control and Prevention.

For Dave, treatment initially consisted of a difficult surgery to remove part of his colon and six months of chemotherapy. 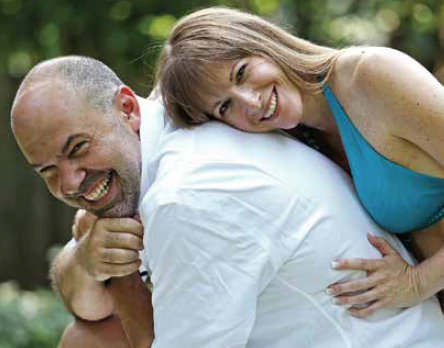 Robin Dubin is a caregiver to her husband, Dave, who has colon cancer. Photo by Ed Mulholland.

“I never felt I was taking care of a patient, because he was self-sufficient. Even throughout chemo, it’s not like he spent days in bed,” Robin says. “It took its toll, but he was still working and very active.”

Likewise, after his cancer reappeared following a 10-year hiatus, Robin credits her husband with helping to make her caregiver role manageable. Sure, she goes with him to many of his medical appointments and has helped him adjust to a drastically altered dietary lifestyle of small but frequent meals because the majority of his colon has been removed.

But her most important role, as she sees it, is to be knowledgeable about treatment and screening options and to stay deeply engaged with his medical team.

“As a caregiver, I feel a big part of my job is really making sure we are asking all the right questions and understanding all that’s happening and all the details,” she says. “There’s so much information that it’s overwhelming, so it’s really my job to make sure we’re doing everything that we can.”

Each relationship between patients and their primary family caregivers is unique.

But common challenges that could arise for the caregiver include increased financial pressures, time demands, stress related to battles with insurance companies and anxiety over the results of the next test or procedure.

For some couples, as with the Dubins, fears of passing on an increased risk of cancer to their children may be a major source of guilt and stress.

In cases where patients have undergone an ostomy procedure, which creates a surgical opening in the abdomen for the elimination of waste, the caregiver may have to deal with body-image worries the patient might have.

Whatever the challenges, experts say it’s essential that family caregivers be mindful of their own well-being, even if that takes some effort.

“Putting up a mirror and shining a light on yourself, which is not the easiest thing to do, may be important for a caregiver to do,” says Karen Y. Mechanic, director of psychiatry at Temple Health Fox Chase Cancer Center, in Philadelphia.

To help deal with some of the stress caregivers face, Mechanic suggests talking with mental health professionals, support groups, family and friends.

And she urges making the time to step out of the caregiver role, even for a short period, on a regular basis.

“It actually makes you a model for good caregiving for the patient,” Mechanic says. “If the patient sees you as a person who takes care of yourself, it’s possible that they become better at taking care of themselves.”

The Dubins say they have done as much as they felt necessary to take care of themselves and each other through Dave’s cancer experience.

Robin says the cornerstone of that care has been open communication between the two of them.

“We’ve been together since we were 19. We really are very close, very open. We share with each other emotionally,” Robin says. “In that respect, I think we help each other out to get through all this.”

Sue Kidera, of New York, who has late-stage colon cancer and is cared for by her husband, Tom Kidera, agrees that the most important roles any family caregiver can play are as sounding boards and sources of comfort.

“When I need support, I look to him to care for me. When I come back from the hospital, he cooks for me, he’s there for me to talk to me,” she says. “The most important thing is to be able to have someone to talk to.”

Open communication should be a pillar in any patientcaregiver relationship, says Meredith Cammarata, a licensed clinical social worker at Memorial Sloan Kettering Cancer Center in Manhattan.

“The best thing patients and caregivers can do for each other is to have open conversations and to remind each other that there’s life outside of cancer, and to take time to do enjoyable activities together,” Cammarata says.

TUNING IN TO MENTAL HEALTH

Even so, caregivers may be more stressed than they realize by the burden of seeing a loved one stricken with cancer.

Depression and anxiety are common not only among cancer patients, but their family caregivers as well—sometimes even more so, Cammarata says.

Tom, 60, knows firsthand the mental-health toll a colon cancer diagnosis can take not only on the patient, but on the caregiver, too.

The late-stage colon cancer with which his wife was diagnosed in 2005 has since metastasized. Now 58, Sue has undergone dozens of surgeries, chemotherapy regimens and radiation treatments.

Four or five years ago, Tom fell into a major depression without initially realizing it. Some signs were evident, he says in retrospect: he stopped caring about his work, and he drank more.

“I just really lost myself. I believed I’d been handling (Sue’s cancer) OK through the first diagnosis,” he says. “But I became really depressed and I didn’t know it.”

His depression, as well as anxiety, arose in part from feelings of not being adequate as a caregiver for his wife, he says.

After turning to a psychiatrist for help, that low point is behind him with the aid of meditation and anti-anxiety and anti-depressant medications, Tom says.

“As a spouse of someone who’s living with cancer, mental health is something you really have to be conscious of,” says Tom, a retired attorney who runs a real estate firm with his wife from their hometown of Pittsford, N.Y., just outside Rochester. He encourages others to make use of the palliative or supportive care teams at their cancer centers early in treatment because they are good conduits to connecting people with mental health professionals. 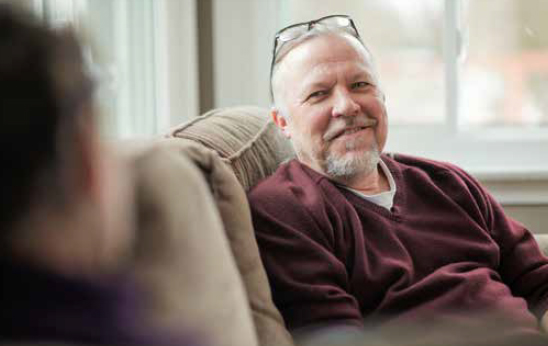 Tom Kidera experienced depression while caring for his wife, who has colon cancer. Photo by Kate Melton.

In the Dubins’ cancer struggle, there is some irony in the fact that a family history of colon cancer helped Dave and Robin react to their situation more positively than they otherwise might have, Dave says.

His grandfather, who eventually wound up needing an ostomy because of his cancer, survived well into his 80s and passed away mostly from the ravages of Alzheimer’s disease, not cancer, he says. Dave’s father, who has been clear of cancer for an extended period of time, is now 83.

Dave, too, was rid of his cancer for about 10 years.

In that time, he and his wife, who live in northern New Jersey, went about their lives even as Dave continued to get regular screenings to make sure the cancer had not re-emerged.

They had two more children, Corey and Maxwell. The boys’ father stayed active in soccer, a game he is passionate about, and the couple tended to the family’s medical supply business.

Then cancer resurfaced in his colon in 2007 and new testing determined it was the result of Lynch syndrome, an inherited genetic disorder that increases the risk of many types of cancer—most commonly colorectal cancer. While Lynch syndrome doesn’t pass cancer itself from parent to child, it does pass on the risk, and so it is recommended that all direct blood relatives have genetic counseling. The U.S. National Institutes of Health estimate that Lynch syndrome accounts for 3 to 5 percent of colorectal cancer cases.

The Dubins have since learned that their oldest, who is 19, has the Lynch syndrome mutation, although he shows no evidence of cancer.

The Dubins had to contend with that knowledge even as Dave underwent a second colectomy that left him with about 18 inches of colon out of the normal 5 feet, and, two years later, surgery to remove part of his right kidney because a carcinoma had developed there, as well.

They have been told it’s best to wait to screen their two younger boys until they are 18 or 19 because, even if the Lynch mutation is present, cancer likely would not develop before then.

Robin has to balance her own feelings of guilt and distress about the future against her husband’s similar worries.

“It’s hard not to feel guilty about passing this on to your children, but it’s also something that you have absolutely no control over,” she says.

Cammarata suggests that caregivers talk to the mental health professionals at their cancer centers, seek out caregiver support groups those centers might provide, or turn to independent groups like the Caregiver Action Network (caregiver.org) or similar resources available through the American Cancer Society and other organizations.

There are also colorectal cancer-specific foundations and groups that can be resources for caregivers. These include the Colon Cancer Coalition (coloncancercoalition.org), the Colon Cancer Alliance (ccalliance.org) and a colon cancer foundation that the Dubins themselves started (aliveandkickn.org).

The Dubins started the organization because they wanted to contribute in their own way toward raising awareness about colon cancer, Robin says.

The organization, which focuses on younger colorectal cancer survivors and the role of genetics in some forms of the disease, also ties colon cancer awareness in with soccer. That’s partly because Dave loves the sport and partly because, through a sport as international as soccer, the Dubins believe they are able to reach a broader audience.