"I had an excuse for everything," Davis says with a laugh. "But finally, my wife said I couldn't ignore it any longer. She insisted that I go to the doctor. Pretty quickly, they found that I had anemia. Then they diagnosed multiple myeloma."

That was 15 years ago. Davis has already survived three times longer than patients with even the best prognosis could have expected in the 20th century. The father of a son and two daughters when he was diagnosed, he has been able to watch those children grow up, take in a foster son, who is now 11, and see his first grandchild born.

And Davis is now part of a clinical trial of a targeted monoclonal antibody, daratumumab, that researchers hope will be a game changer in the treatment of myeloma. Even more amazing, Davis' story is becoming more and more common. 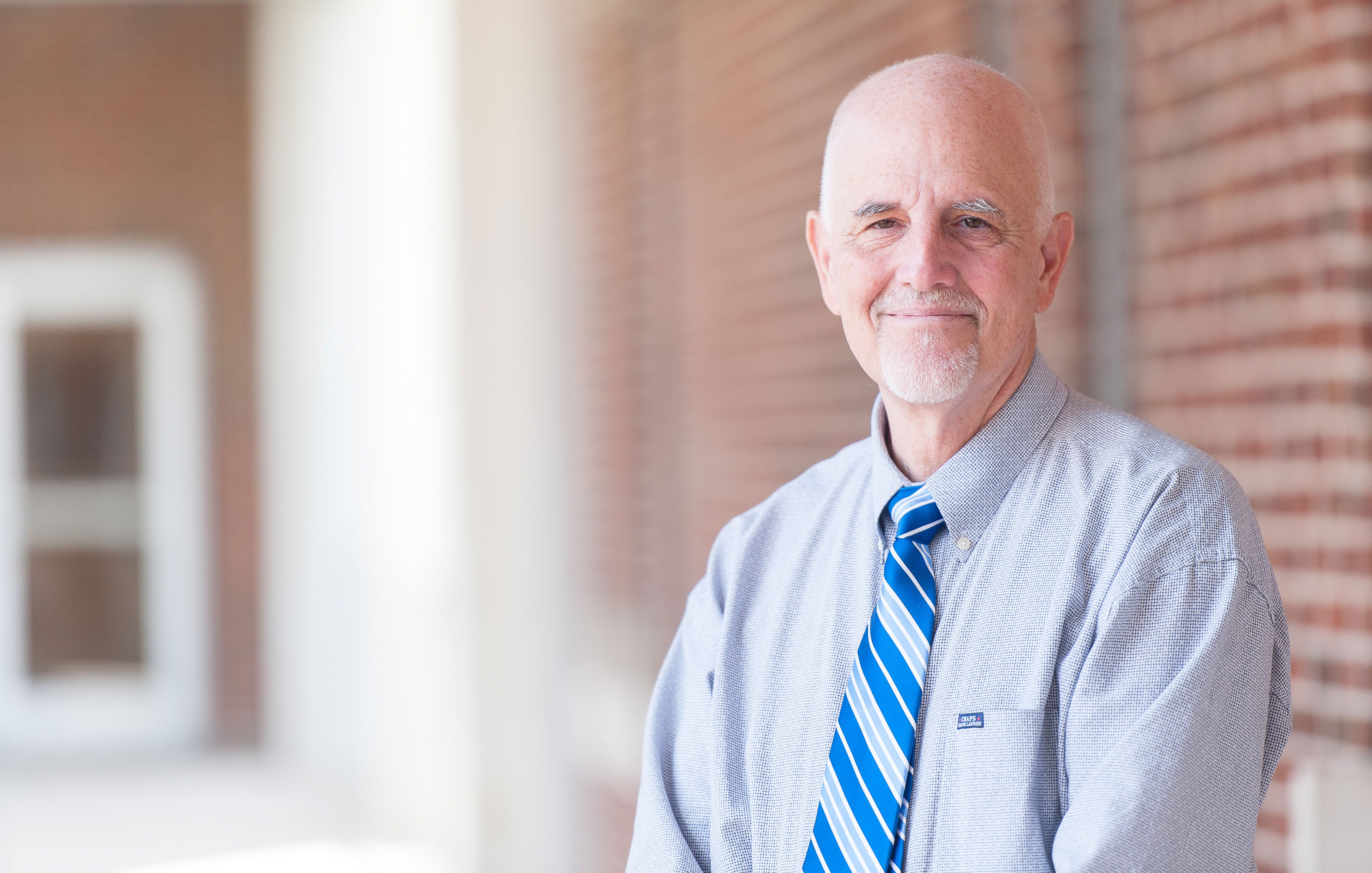 For over 15 years, Dana Davis has treated his myeloma with four or five drugs, and is now participating in a clinical trial of another. [Photo by Katey Penton]

A multiple myeloma diagnosis used to mean that a patient could only expect to survive three to five years — with only chemotherapy agents available for treatment. Today, that landscape has changed so much that it's almost unrecognizable, with average survival nearly tripled and additional advances on the horizon with a sophisticated array of therapeutic options.

Doctors are trying established drugs in new combinations, doses and formulations that seem to cut down on the side effects of treatment, and also to lengthen stretches of progression-free survival (PFS). Some drugs in the clinical trial pipeline enlist the body's own immune system to fight the disease, while others target cells with specific genetic mutations, or never-before-targeted systems that control cell processes. The fact that oral drugs are in development means that patients don't have to travel to an infusion center every few weeks to keep their cancer under control.

Multiple myeloma remains an incurable disease, but it is becoming more manageable. Doctors are beginning to talk of it as a "chronic disease." Some are optimistic enough to even say that a cure may be possible.

"It's a massive convergence of our understanding of biology, the technology becoming available to understand myeloma cells and how they respond, the genetic subtypes of myeloma, the ability to engage both the patient community and researcher, to transfer data and information," says Walter Capone, president and CEO of the Multiple Myeloma Research Foundation. "It's truly a renaissance in our ability to make treatment of myeloma more precise and accelerate breakthroughs for patients."

Approximately 22,000 Americans receive a multiple myeloma diagnosis each year. Myeloma is the second most common blood cancer, after lymphoma. It tends to strike African-Americans more often, and those older than 65.

Myeloma starts in the plasma cells of the bone marrow, white blood cells that, when healthy, are specialized immune cells, specifically B-cell lymphocytes that make antibodies. As the myeloma kindles, the plasma cells stop doing what they're supposed to do and start making large amounts of an abnormal, non-functional antibody called "M protein." These proteins and cells can clump together, forming hole-like cysts in the bone. If more than one cyst has formed, the diagnosis is "multiple" myeloma. M proteins and other substances made by myeloma cells also can etch away bone tissue, causing pain and breaks. They may thicken the blood, interfering with the normal function of kidneys, bone marrow, nerves and the immune system. And they can lead to high levels of blood calcium, causing dehydration and kidney problems or failure, or make patients susceptible to infection.

From Standard Treatment to New Territory

In recent years, the standard treatment has been a course of traditional, high-dose chemotherapy drugs like melphalan or cyclophosphamide, considered an "induction" phase of treatment meant to induce remission of the cancer prior to a stem cell transplant. Next, the patient receives a stem cell transplant. This grueling, months-long procedure replaces the diseased bone marrow with healthy marrow from a donor. The side effects of myeloma treatment can be harrowing: drops in blood counts, crushing fatigue, diarrhea, severe bone pain, relentless infections, nausea, heart damage.

Then doctors monitor the myeloma patient for signs that disease is still present, often by checking the levels of two proteins: beta 2 microglobulin and serum albumin. Maintenance drugs to keep the myeloma at bay can be prescribed as necessary.

The goal of this exhausting protocol has been to create stretches of time when the disease does not progress. But since there is no cure, those periods of PFS eventually grow shorter and shorter, until finally, no drugs work any longer.

"I'm not a fan of transplant to treat myeloma," says James Berenson, a West Hollywood, Calif. oncologist who specializes in myeloma. "I like to say that it's not about more, it's about being more specific."

The breakthrough class of drugs that makes such a public statement possible is the "proteasome inhibitors." The first of these medicines, Velcade (bortezomib), came on the market in 2003. It attacks myeloma cells by interfering with proteins that regulate various cycles within cells, such as DNA repair. Its side effects include peripheral neuropathy (numbness or tingling) in the hands and feet, fatigue, nausea and vomiting, and low platelet and red blood cell counts.

Then doctors began to use immune-modulating therapies (IMiDs) to treat myeloma. These drugs — Thalomid (thalidomide), Revlimid (lenalidomide) and Pomalyst (pomalidomide) — interfere with the blood supply to cancer cells, while at the same time stimulating the action of the body's disease-fighting T-cells. Side effects of Thalomid and Revlimid can include gastrointestinal discomfort, fatigue, low red or white blood cell counts, swelling in the arms and legs or dizziness, with severe side effects including blood clots. The third generation of these drugs, Pomalyst, is more potent, and although it can spark similar side effects, they are fewer, allowing the use of the treatment in patients who are older, or who have relapsed on other medications.

With the development of the proteasome inhibitors and immune-modulating drugs, several large international studies (FIRST, UPFRONT, MOVE) proved that two-drug combinations could be effective against myeloma. One method includes pairing steroids such as dexamethasone or prednisone with chemotherapy or proteasome inhibitors. While this can bring on side effects including high blood sugar and weight gain, as well as immune system suppression and weakened bones, it may also lessen the nausea that can be caused by chemotherapy.

Two-drug combinations, in turn, led to "triplet" therapies, using three agents of various kinds in various doses and patient populations. Researchers are now investigating whether certain combinations work better when myeloma is first diagnosed, or might be better for very old patients.

The triplet approach could cover all the bases: A doctor might use one proteasome inhibitor, one IMiD and one steroid. That way, experts explain, the drugs hit as many viable targets as possible, attacking the disease from all angles.

"The idea is to manipulate the drugs in such a way that the doses are lower, the cycles are longer," explains Berenson. "Then the side effects possibly can be mitigated. Patients can have a better quality of life."

Many experts expect that the next breakthrough will come with monoclonal antibodies, which have made such a difference in improving the prognosis in many breast and lung cancers. It's a completely new class of drugs for this cancer type.

"Monoclonal antibodies have low side effects, and they halt progression," says Capone of MMRF; side effects can include nausea, headache, dizziness and fever, but also an increased risk for infection, such as pneumonia. "With myeloma and immunooncology targeted antibodies, we can start to think about how we engage the immune system in a more straightforward manner than we have ever seen before."

Half a dozen monoclonal antibodies are in various stages of trial for use against myeloma, or in trials for combined use with other drugs. The two closest to approval are elotuzumab, which stimulates the immune system's "natural killer" cells to attack the myeloma, and daratumumab, which binds to certain proteins on the surface of myeloma cells and stimulates death of the cells. With the latter drug, 35 percent of patients who were not responding to any other drug were able to get their disease in control, halting progression for six months or more. That's a first for myeloma patients.

After two stem cell transplants and two four-year periods of remission, Davis, the Atlanta father, started to run into trouble. "My multiple myeloma started to not respond to traditional treatments," he explains. "I tried four or five different drugs. They'd be effective for a little while, and then they'd lose their effectiveness. I got onto a daratumumab trial, and I've been on the drug for two years now."

"Elotuzumab and daratumumab will likely be approved this year, we're hoping in the October/November time frame," says oncologist Brian Durie, chairman and co-founder of the International Myeloma Foundation. "They've both received breakthrough therapy designation with the U.S. Food and Drug Administration."

The next class of drugs on the horizon will target specific mutations within myeloma cells. For instance, approximately 5 percent of myeloma contains a genetic mutation called "BRAF," so that makes a natural drug target. Other genetically targeted therapies in trials aim at an alphabet soup of different mutations: MEK, PI3K/AKT, FGFR3, CDK, and the deletion of part of chromosome 17, known as a 17p deletion.

Based on these principles, the MMRF launched the MMRF CoMMpass Study, a longitudinal study of 1,000 newly diagnosed myeloma patients mapping the genomic profile of each patient's myeloma and comparing it to their clinical data for at least eight years; all the data will be made available to researchers worldwide through a dedicated portal, the MMRF Researcher Gateway. "Through these efforts to decode the genetic map of myeloma in each patient, we will shortly initiate trials of novel therapies that target the more common molecular alterations in multiple myeloma," says Capone.

"The idea is to sequence genes that make the tumor marker, and then to use that as a vehicle to deliver toxins or other therapy. That should be a beautiful way to concentrate treatment," explains Berenson.

Responding to this exploding understanding of cancer, the International Myeloma Foundation has launched the "Black Swan Initiative," a global, collaborative approach which uses the most precise testing for minimal residual disease (MRD) to determine when myeloma is still present, even at the lowest levels, as a basis for treatment decisions aimed at a cure.

"We can test patients at baseline, and then see how their disease changes over time. We're learning that multiple myeloma cells have many mutations that vary from patient to patient," Durie explains. "We're characterizing disease at the cellular level. We're developing tests that can detect just a few multiple myeloma cells, one myeloma cell in a million."

Meanwhile, research teams around the world are looking at even newer strategies for killing myeloma: "There are a lot of good, new drugs in trials now," says Berenson. "I used to say, ‘Don't go on a trial until it's time for the Hail Mary pass.' Now I'm putting new patients on trials."

"Increasingly, in our studies, we're trying to capture patients that have really aggressive disease, designing drug combinations to treat those patients," says oncologist Shaji Kumar of the Mayo Clinic in Minn., who has done numerous studies on oral proteasome inhibitors for multiple myeloma. "For the patients, the key thing is this: We have made this a chronic disease. Having enough drugs to keep the myeloma under control for long periods of time is the key. The longer we keep someone on a drug, the closer they are to something new that is on the horizon, something that might cure this disease."
Print | cure Printing...