http://www.curetoday.com/publications/cure/2015/winter2015/getting-a-second-opinion
Getting a Second Opinion
Maryann Hammers
Cindy Walker is grateful that she sought a second opinion after being told she’d experienced a recurrence of ovarian cancer.

Without the second doctor’s insights, she would never have known she could consider chemotherapy.

It was after an eight-year remission that the Davis, Calif. resident learned that cancer had recurred in her lungs and lymph nodes. Her small local hospital diagnosed the tumors as a type of ovarian cancer called borderline serous—the same as her original diagnosis.

But when Walker sought a second pathology opinion from a major university medical center, experts there concluded that the new cancer in her lungs was not borderline. Instead, it was low-grade ovarian cancer.

It’s a critical distinction, Walker says. “Low-grade ovarian cancer has a low chemo response rate, but borderline tumors have a zero response rate. Before taking the risks involved with chemo, I must be certain what condition I have.”

“Patients should be looking for a comprehensive evaluation of their options,” says Patricia Thompson, a medical oncologist at Cancer Treatment Centers of America at Southeastern Regional Medical Center in Georgia.

WHEN A SECOND OPINION MAKES SENSE

A second opinion is a good idea if a patient is uneasy with a doctor’s approach. “Listen to your gut,” says breast cancer survivor Angil Tarach-Ritchey, a registered nurse who lives in Michigan. “If any part of you is uncomfortable with the initial diagnosis, treatment plan or the physician, get a second opinion. If you have anything less than full trust in your physician’s knowledge, skills and bedside manner, you will not receive optimal treatment because there will be a barrier between you.”

[Read "When a Second Opinion is One Too Many"]

Raina Pepke, of South Pasadena in Southern California, sought a second opinion when she realized that her first medical oncologist had very little experience with her kind of cancer. “Once I had a chance to read through some journal articles, I quickly became aware that he wasn’t on top of the latest research,” she says.

She traveled to Stanford University to consult with an ovarian cancer specialist, who clearly and comprehensively explained her options and recommended a local medical oncologist who could continue her care. 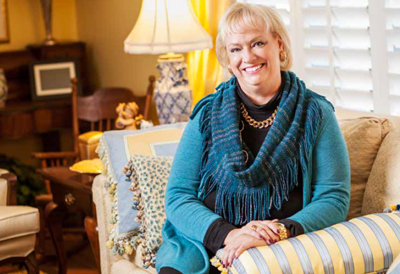 Donna Heckler was initially advised to have immediate surgery for her breast cancer, but a second opinion convinced her to have chemotherapy first. She is now four years post-diagnosis. Photo by David Torrence.
A second opinion can also provide information and ideas that help in clarifying next steps. That was the case with Donna Heckler. When she was diagnosed with breast cancer in 2010, her first doctor wanted to do immediate surgery. “I had so many questions,” says Heckler, who later wrote the book Living Like a Lady When You Have Cancer (AuthorHouse 2014).

In a fortuitous turn of events, she had a follow-up appointment with an orthopedic surgeon for recent knee surgery. She mentioned that she had just been diagnosed with breast cancer. “I will never forget his saying, ‘The heck with your knee; let’s talk about your breast,’” Heckler says. “He helped me get an appointment the next day with the leading breast surgical oncologist in the area.”

The second doctor conferred with a medical oncologist. They advised against rushing to surgery and suggested that Heckler first undergo chemotherapy, then surgery, followed by radiation. “This change in course was significant, as my tumor, which was larger than a tennis ball, shrank to (become) virtually nonexistent after chemo,” she says. “I am now four years post-diagnosis.”

Sometimes a second opinion will leave a patient with new questions — especially if the second doctor’s advice differs widely from that of the first.

One way to deal with that is to ask the physicians to connect on the phone so that they can discuss the reasons for the differences and the best path forward for the patient.

Another option is for the patient to resolve the discrepancy by seeking a third opinion, says Allen Kamrava, a colorectal surgeon who practices in Los Angeles.

But that doesn’t mean patients should shop around until they get the answers they want to hear. They should start with specific questions and goals, and stop when those have been satisfied.

Kamrava remembers a patient who came to him for a sixth opinion, and then went on to seek opinions from other doctors, after hearing repeatedly that her cancer was inoperable. Another patient tried to sway the doctors she saw to adopt the opinion that her symptoms added up to an innocuous condition, and not to cancer.

In such cases, Kamrava says, getting the desired answer may not be a victory. A patient can end up leaving a cancer untreated, or living his last few months battling the side effects of treatments that aren’t going to work.

Another no-no is complaining to a second doctor about the original physician’s advice. “That could impede the physician’s objectivity,” Kamrava says. A patient serves his own interests better by maintaining a poker face and listening to the doctor’s unbiased opinion.

KNOWING WHERE TO LOOK

When Pepke was searching for a second opinion, she started with NCI-designated cancer centers that specialize in her type of cancer.

Patients may be equally happy with physicians in independent practice, Kamrava notes. “In big centers, often so many patients are trying to get in that there is very little personal attention. That being said, big centers can provide the best equipment and ancillary services, which are very important, and sometimes crucial.”

Some large cancer centers also have formal second- opinion programs designed to give patients the information they’re seeking without too long a wait. The Sidney Kimmel Comprehensive Cancer Center at Johns Hopkins offers a second-opinion program through its Lung Cancer Multidisciplinary Clinic. In the clinic, patients with lung cancer can have their cases reviewed, and a suggested plan of action drawn up, in a single day because all the necessary experts—including medical, surgical and radiation oncologists and interventional pulmonologists—are on hand at the same time.

For patients who can’t, or don’t want to, travel, many cancer centers—including MD Anderson, Johns Hopkins and the Cleveland Clinic—offer second opinions remotely. Patients can also ask their primary-care physicians for recommendations, or join online support groups for their types of cancer (Inspire and Cancer Support Community are two such forums) and ask for recommendations in their geographic areas.

Consider asking the original oncologist on the case for a recommendation. But wait—won’t that doctor be angry or hurt? Nope. “Patients should not be concerned about offending physicians when getting a second opinion,” says Kamrava. “We expect it.”

Or as R. Ruth Linden, a San Francisco patient advocate, tells clients, “No doctor worth her or his salt will take offense. If their doctor discourages them from seeking a second opinion, they should consider firing their doctor. The best clinicians recognize the need for dialogue with colleagues.”

Insurance companies shouldn’t put up barriers, either. They tend to agree that second opinions are the “standard of care,” Linden says, and “typically do cover second-opinion consultations.” In fact, some insurers require one before treatment begins. Patients can even use health insurers as resources for finding secondopinion doctors by asking for a list of specialists who are in-network.

The bottom line? Patients who have questions or concerns about any aspect of their diagnosis or treatment owe it to themselves and their loved ones to get a second opinion, says Pepke.

“Cancer treatment is as much art as science,” she says. “You need input from a variety of people. No one doctor has a crystal ball.”

Here are some questions patients should consider asking during second-opinion consultations:

> Is the diagnosis correct? Should the pathology be reviewed, or are there additional tissue or blood tests that are needed to confirm it or to provide additional detail?
> Do I need an additional specialist to be involved in my care (for instance, a surgical, medical or radiation oncologist, or a medical geneticist)?
> Are there different therapeutic options for my case, and what are the associated pros and cons? > How should I be monitored during treatment, and what will be the next steps if the treatment does or does not help?
> Am I a candidate for a clinical trial and, if so, what are the advantages or disadvantages to participating?
> In addition to your medical recommendations, are there changes I should make to my activities or lifestyle?