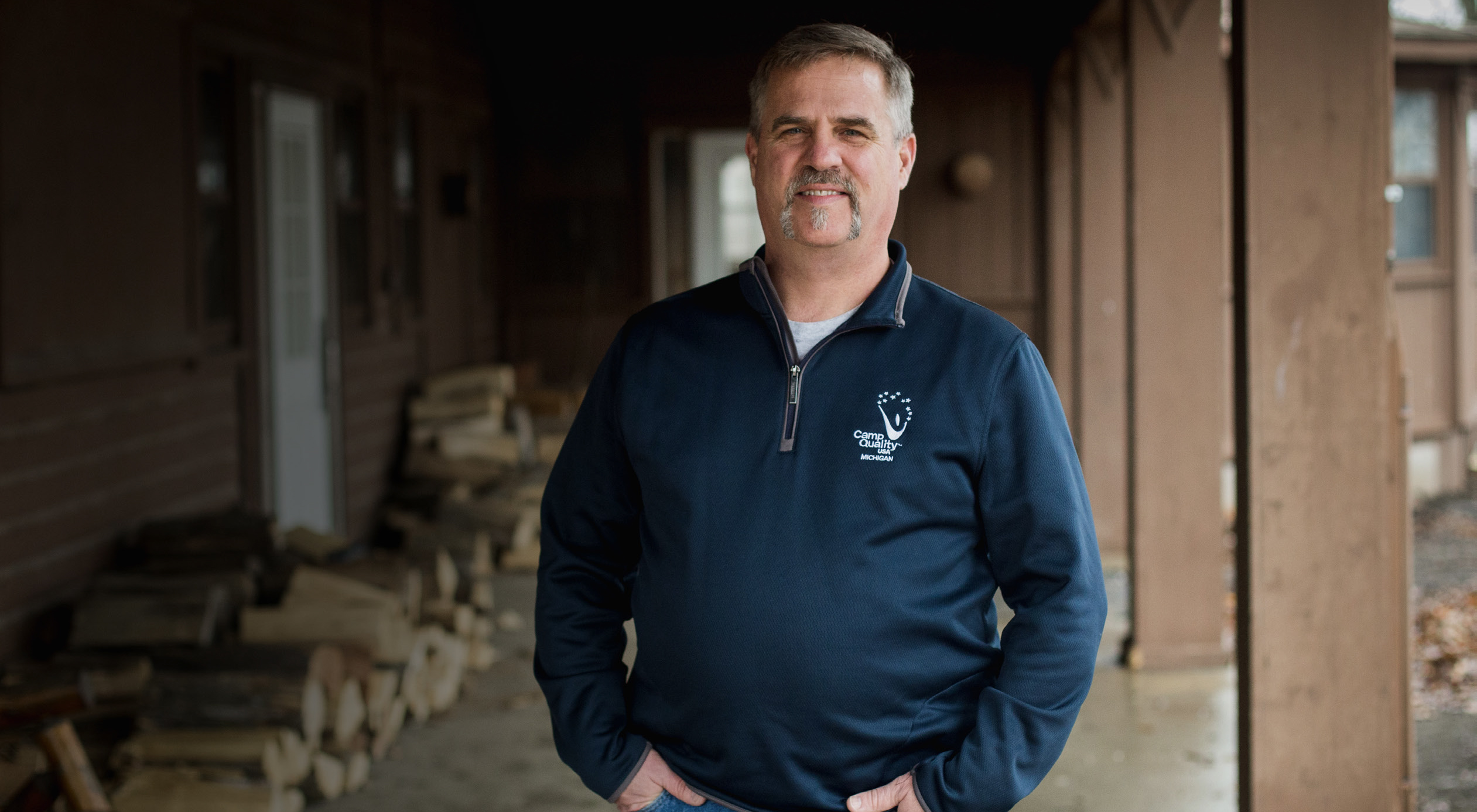 JEFF CRAM, director of Camp Quality USA in Eastern Michigan - PHOTO BY LENI KEI WILLIAMS
Jeff Cram’s daughter, Payton, was 10 when she received a diagnosis of Ewing sarcoma in 2007. In some cases, that cancer affects a bone in a limb — typically, a leg — but Payton’s was in her pelvic wing, making it difficult to treat. “They weren’t able to remove the bone, which is the optimal way to treat this cancer,” explains Cram, who is from Michigan. “They treated her with chemotherapy and radiation, but eventually those treatments stopped working.”

Payton had attended Camp Quality USA the first summer after her diagnosis. When she found out the doctors could do no more for her, the first thing she said was that she wanted to go back to camp.

“Despite the treatments the kids were undergoing, they all seemed really normal to each other,” Cram says. “At camp, everyone was equal. The kids barely noticed Payton’s limp. They were able to get out and enjoy normal activities. They could be kids again.”

After Payton died in 2008, Cram found himself drawn to the camp. He began volunteering, starting out by driving golf carts to help kids who had trouble getting around. Today, he’s director of the eastern Michigan camp. “It’s the place where I feel closest to Payton,” he says.

Cram is not the only person who has stayed involved with the camp long after being touched by cancer. Kristin Patterson, 32, from Missouri, began going to Camp Quality in 1997, the year after she was diagnosed with acute myeloid leukemia. Following a bone marrow transplant back then, she’s been in remission but has some chronic health issues as a result of her treatments.

Today, Patterson is co-director of Camp Quality in Neosho, Missouri. “As a child, I knew how special camp was,” Patterson says. “The first year I came to camp, I had no hair, but no one even noticed. Now that I’m on the other side, some say I am a role model to these kids, but they are a blessing and an even bigger role model for me.”

EXPONENTIAL GROWTH OF CAMPS AND RETREATS


Camps and retreats for patients of all ages with cancer have their roots in the pediatric oncology community. What started as a small movement has blossomed into a thriving enterprise. The website of NeedyMeds, a nonprofit organization with a mission to share information about affordable, cancer-related resources, lists about 215 camps and retreats — many of which are free — for patients with cancer, including 150 for children, 148 for adolescents and 34 for adults. Some of these experiences welcome patients’ family members, as well, and others are strictly for caregivers or close relatives, such as siblings. In most cases, camps do their best to accommodate all who are eligible, although sometimes prospective campers are wait-listed.

Camp Good Days and Special Times in Branchport, New York, on the shore of Keuka Lake in the Finger Lakes region, is among the first of the camps for people with cancer to have opened in the United States. Founded in 1980 by Gary Mervis, the camp was his response to the isolation and loneliness his daughter, Teddi, described after receiving a diagnosis of a brain tumor at age 9. Camp Quality USA soon followed in the mid-1980s, modeled after Australian camps founded on a principle expressed by a pediatric oncologist: “No one can do anything about the quantity of life, but we all can do something about the quality.”

“In the early days, most of the kids who came to Camp Quality USA wouldn’t survive,” says CEO Patty Harris. “The camp gave them an opportunity to have as much fun as possible. Today, more than 80 percent of the kids who receive a cancer diagnosis survive, which has changed the kinds of activities we offer. We now focus on helping our campers develop life skills, such as cultivating friendships, which, in turn, builds self-confidence.”

The camp has expanded significantly. Starting as a single location in northwest Missouri, Camp Quality USA now has 15 U.S. sites, with a 16th scheduled to open this summer. Run by volunteers, each weeklong experience is free to campers and offers activities including arts and crafts, swimming, rope courses and climbing walls.

One of Camp Quality USA’s unique features is its companion model, which matches each camper with an adult. The companion’s job is to focus solely on his or her camper, helping that child stay safe and comfortable while participating fully in the camp experience. “These relationships last for years,” Harris says. “One camper is getting ready to be a bridesmaid in her companion’s wedding.”

Another pioneer in the field, Camp Mak-A-Dream, is the brainchild of Harry and Sylvia Granader, who donated 87 acres of their Montana ranch to establish it in 1995. “Harry was a builder who had constructed a Ronald McDonald House in Detroit,” recalls Beth Jones, camp director. “He and Sylvia were big thinkers who rallied people around them to create our camp. Their vision included sharing the beauty of western Montana with people from around the country whose lives had been affected by cancer.”

When the camp opened, 45 children attended. In 2017, the camp served 568 participants through its programming for children, young people with a brain tumor diagnosis, the adolescent and young adult (AYA) communities, siblings, families and women with ovarian cancer. Interested campers can apply online on a rolling basis. The camp tries to accommodate as many people as possible, even those near the end of life. 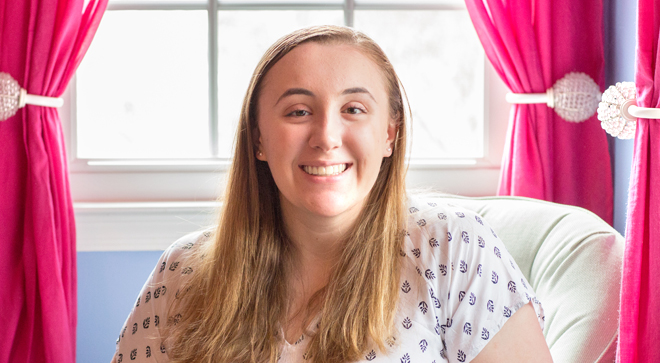 MOLLY McENROE forged her closest friendships at Camp Mak-A-Dream after receiving a brain tumor diagnosis. - PHOTO BY KRISTINE FOLEY
Depending on participants’ needs, the camp offers activities such as archery, arts and crafts, photography, yoga, mindfulness and zip-lining. Even richer than the array of options, however, are the deep friendships forged at camp. Molly McEnroe, 18, of Basking Ridge, New Jersey, can attest to that.

“This is such a welcoming environment,” she says. McEnroe, who was diagnosed with a tectal glioma when she was 12, adds that her best friends are from camp. “They really understand what I’ve been through,” she says. “Everyone opens up at our small cabin chats. You (would) have to try not to make friends here.”

Dov Emerson, also 18, from Holland, Michigan, had a brother who died at age 6 from stage 4 neuroblastoma five years ago. His camp experience has been similar to McEnroe’s, he says, adding that he never had a bad experience with anyone there. “Those relationships are unbreakable,” he says.

BENEFITS OF CAMP FOR ADULTS


Building relationships and combating loneliness are recurring themes expressed by people of all ages who attend camp. In fact, Nancy Ferro founded Epic Experience in 2012 to help her son, Michael, deal with the depression that followed his successful treatment for testicular cancer. “We remembered what a magical experience camp had been for him when he was young, and we wanted to duplicate that experience for other cancer survivors,” says Ferro. “We started our own camp because we wanted to give back to the cancer community.”

Located on the second-oldest dude ranch in the Colorado Rockies, Epic Experience features free, weeklong outdoor experiences for campers aged 18 and older. The camp accepts applicants on a first-come, first-served basis, drawing from its waiting list, as well. During summer, participants go horseback riding and whitewater rafting; in winter, they go snowshoeing and cross-country skiing. Nightly campfires give campers the opportunity to talk about cancer, laugh and cry.

“Cancer never leaves you,” Ferro says. “I see that in the campers who participate in our program. Many have no evidence of disease, and they often say they’re dancing with NED. That’s the way it is for many cancer survivors.”

Cancer survivors from the AYA community, who range in age from 15 to 39, appear to be particularly vulnerable. This is confirmed by research on the impact of mindfulness on resilience among patients with cancer, conducted by clinical psychologist David Victorson, Ph.D., associate professor of medical social sciences in the Feinberg School of Medicine at Northwestern University in Chicago and director of integrative oncology at the Robert H. Lurie Comprehensive Cancer Center’s Survivorship Institute. “Compared (with) older adults and younger children, the AYA community has been largely neglected, has worse outcomes and has a greater likelihood of being misdiagnosed,” says Victorson. “They often feel isolated, and few support groups and other services are offered for them.”

To address these issues, Victorson and others founded True North Treks (TNT) in 2009. “We wanted to provide a unique way to bring young adults together,” he says. “We’ve seen firsthand the stigma and life disruption associated with cancer and being emotionally derailed by the entire experience. We wanted to give young adults the time, space and skills to reset their coordinates and chart a new course.”

TNT offers free, weeklong backpacking and canoeing treks for young adult survivors and their caregivers in beautiful backcountry wilderness destinations in the United States. Led by trained guides, participants make important connections known to be beneficial — to nature, to other young adults going through something similar and to themselves — and practice yoga and meditation.

The idea that exposure to the outdoors confers health benefits is loosely based on a theory called attention restoration, which asserts that people concentrate and focus better after engaging with the natural environment. The experience subdues brain activity in the prefrontal cortex, so people can sit back and appreciate their surroundings. Studies have shown that walking in nature and even looking at pictures of nature or views from a window have a positive impact on mood and overall quality of life.

Other research supports the use of yoga and mindful meditation. For example, one study conducted by researchers in Canada and published in the Journal of Clinical Oncology compared mindfulness training to traditional support groups among 271 distressed patients with breast cancer. The results demonstrated that mindfulness improved stress levels, quality of life and social support systems more effectively than the more traditional approach. 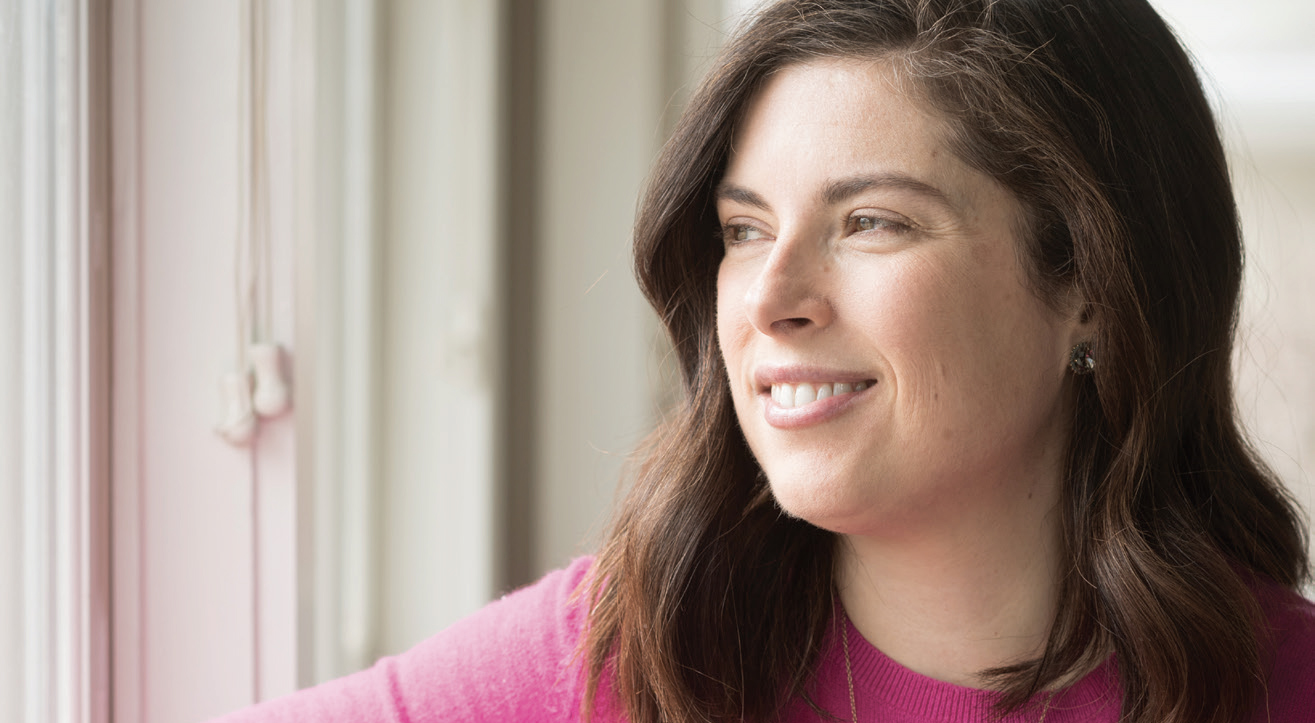 KATE SHANAHAN, breast cancer survivor and True North Treks participant - PHOTO BY KEN CARL
Echoing those findings are the voices of participants in the TNT experience. Kate Shanahan, a breast cancer survivor from Wilmette, Illinois, recalls sitting in the woods during her first trek, surrounded by other young cancer survivors. She noticed that, for the first time since her ordeal, cancer wasn’t at the forefront of her thoughts. Instead, she was able to unplug, step back and experience the peace and calm of nature.

“I had a bumpy transition back to my life following my yearlong treatment for stage 1 HER2-positive breast cancer, which was discovered five years ago, when my daughter was only 5 months old,” says Shanahan, who is now 39. “I was looking for ways to embrace what had happened in my life. I found a study at Northwestern that focused on yoga and mindfulness. Through that study, I learned about TNT.

“Sometimes we walked and talked in pairs, sat and noticed the sounds of the waterfall or walked in silence,” continues Shanahan. “The experience left me with a powerful sense that change had taken place deep inside myself.”

For Roy Arredondo, 38, from Chicago, a similar moment came while he was canoeing on the Green River in Utah. After receiving a diagnosis of stomach cancer five years ago, Arredondo faced grueling treatment. In addition to undergoing chemotherapy and radiation, he had two-thirds of his stomach removed. The experience left him physically depleted, depressed and worried about how he would support his wife and two sons.

“Out on the river, I built up my stamina and got my energy back,” Arredondo says. “I was able to let go of some of my anger and accept the way things are. The river is my place, where I reset my inner clock and find myself.”
Print | cure Printing...