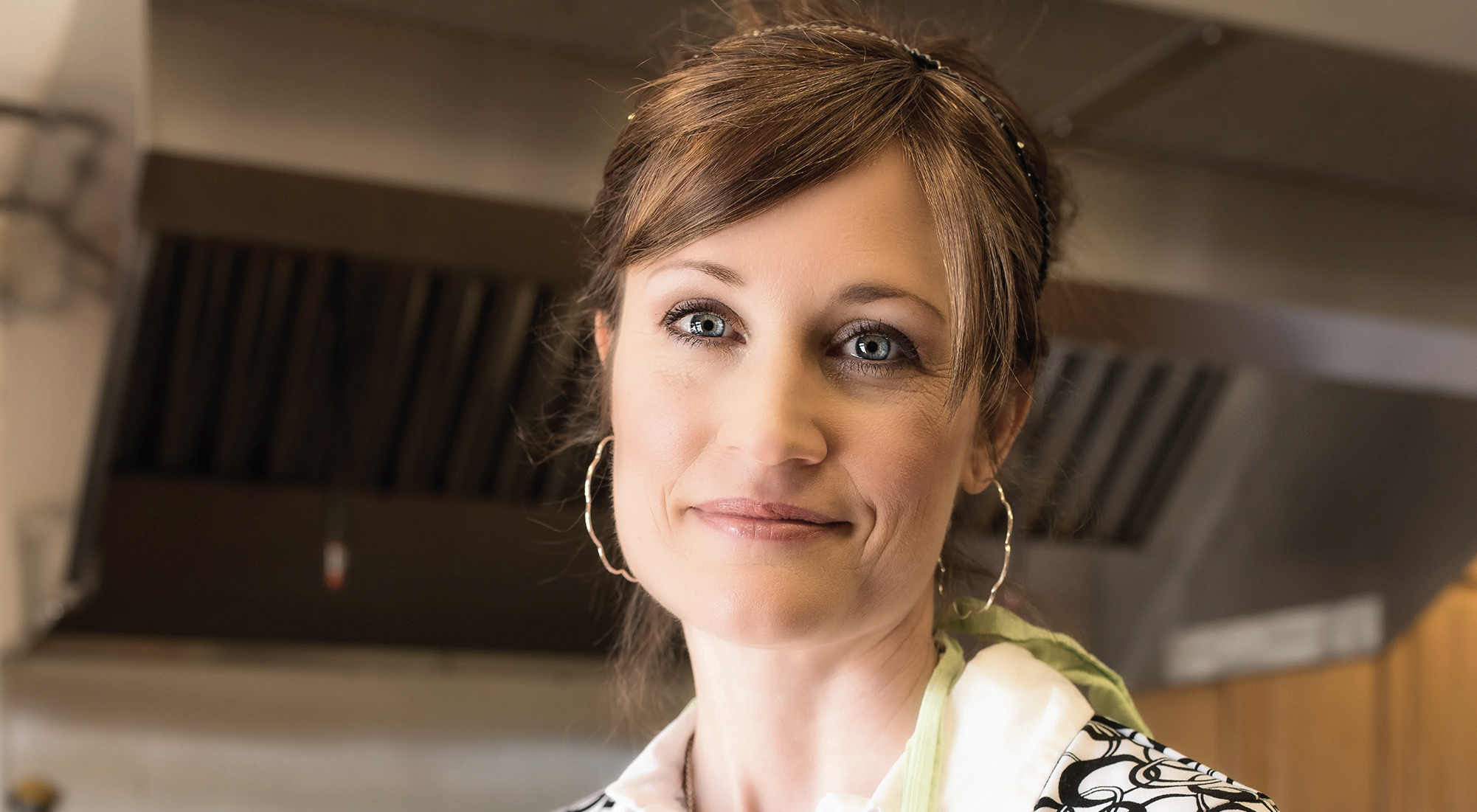 CINDY LUPICA was diagnosed with choriocarcinoma four months after giving birth to her daughter. - PHOTO BY SHARON WALLACE
In September 2013, Cindy Lupica, then 37 years old, gave birth to a healthy baby girl. The scene was dramatic, much like Lupica feared it would be. She delivered at 39 weeks in the ambulance on the way to the hospital. Her rural, Mojave Desert home near Apple Valley, California, is a half hour from the nearest hospital.

When Lupica started having contractions at 25 weeks, she began to worry that the birth would be quick and she wouldn’t make it to the hospital. With her three previous pregnancies, Lupica hadn’t experienced contractions so early on. But she had two normal ultrasounds, and her doctor wasn’t terribly concerned. “He asked if I was exercising and told me to maybe cut back a little,” Lupica recalls.

For six weeks after her daughter’s birth, Lupica bled. Again, that hadn’t happened with her other pregnancies, but again, her doctor was not alarmed. He suggested it was caused by hormones because this time, she was an older mom. Finally, the bleeding stopped, followed by intermittent spotting — until one night in late January, she began to hemorrhage.

By the time Lupica saw her OB/GYN the next day, the bleeding had stopped, but an ultrasound revealed what looked to her like a bunch of grapes in her uterus. The doctor had an idea what it was, but because Lupica didn’t have health insurance at the time, he sent her to the emergency room (ER) at a public hospital. He knew she could get affordable care, a diagnosis and treatment there.

When she arrived at the ER two days after the initial hemorrhaging, Lupica started to bleed more profusely again. The ER staff were sure she was having a miscarriage and moved her to labor and delivery. Lupica insisted that she wasn’t miscarrying, explaining that she’d had a baby four months earlier and had intermittent bleeding ever since. Lupica filled two buckets with blood that day. When the doctor got in to see her, he ordered a human chorionic gonadotropin (HCG) test “stat,” she recalls. Lupica knew she was in trouble. “They drew my blood, and within half an hour, we had three or four doctors come in and tell us the news.”

HCG is what creates a positive result on a home-pregnancy test. When a fertilized egg implants in the uterus, the placenta produces the hormone, which is detectable in the urine just days later. But if HCG is still in the body more than three weeks after giving birth, it can be a sign of a problem, including one of several placenta-related cancers, collectively known as gestational trophoblastic neoplasia (GTN).

GTN refers to several types of rare tumors that grow out of the placenta. That is, they grow out of a layer of cells called trophoblasts, which normally give rise to the placenta during pregnancy. GTN tumors can be highly prone to metastatic disease if not caught early, but remarkably, they are exceptionally responsive to chemotherapy and can be cured, even at advanced stages. For those few women who don’t respond to chemotherapy, immunotherapy drugs bring new hope.


The most common form of GTN, occurring in about 1 in 1,000 pregnancies, is a complete or partial molar pregnancy. A complete mole usually occurs when one or two sperm cells fertilize a so-called empty egg — it doesn’t contain DNA. Because the only genetic material comes from the father, fetal tissue does not develop. In a partial molar pregnancy, two sperm fertilize a normal egg. A tumor develops out of a combination of trophoblastic and fetal tissue, but a viable fetus doesn’t form. When detected early, moles are often confined to the uterus and not malignant. The prognosis of cure for those tumors (sometimes referred to as gestational trophoblastic disease, or GTD) is excellent.

“Doctors might detect molar pregnancies in several ways,” says Elisabeth Diver, M.D., a gynecologic oncologist at Stanford Health Care in Palo Alto, California. “An early pregnancy ultrasound could reveal the abnormality. A woman could have abnormal HCG levels. Or, particularly in the case of a partial mole, a woman might require a suction evacuation [dilation and curettage (D and C)] after a miscarriage, and the pathology will indicate that it was a mole.”

In most cases, moles can be entirely removed with a D and C. After the procedure, doctors monitor a woman’s HCG for up to a year to make sure it stays at prepregnancy levels, which indicates the molar tissue was completely removed and none continues to grow in the uterus. “If you’ve had just one molar pregnancy, you’ve been monitored preferably for up to a year, and everything is fine, there is no reason why you should not be able to attempt to get pregnant again,” Diver says. “However, it is critical that if you do become pregnant, you see an obstetrician very early on to check on ultrasound and make sure everything is normal.”

For many women, this frightening and lonely diagnosis follows the loss of a pregnancy. “There’s a lot of fear and guilt around wanting to be pregnant and getting pregnant again,” Diver says.


In rare cases, it’s possible to have a D and C and the HCG goes down, and then it starts to rise again, according to Don Dizon, M.D., director of women’s cancers at Lifespan Cancer Institute and of medical oncology at Rhode Island Hospital in Providence. “When that happens, we worry it has become invasive,” he says. Invasive moles, also called post-molar GTN, are just one of the more worrisome forms of GTN with metastatic potential.

For fewer than 1 in 5 women who has a complete molar pregnancy, the mole spreads beyond the lining of the uterus and into the muscular wall and cannot be removed by a D and C. In extremely rare cases, a partial mole can become invasive, as well. Post-molar GTN can spread to other organs — most often the lungs, which happens about 4 percent of the time.

Choriocarcinoma, the most aggressive form of GTN, is a tumor that can grow quickly and spread to other organs, including the brain, lungs and vagina. About half of cases follow molar pregnancy, and a quarter develop after miscarriage or abortion. The other quarter are the result of tissue that remains in the uterus after childbirth. Choriocarcinoma follows 2 to 7 of every 100,000 pregnancies in the United States.

Prolonged bleeding after a molar pregnancy, miscarriage or normal birth is the most common symptom of post-molar GTN or choriocarcinoma. Women might also have abdominal swelling. Choriocarcinoma that has spread to the lungs can cause a cough, difficulty breathing or chest pain. In the brain, it can cause headaches and dizziness.

The night Lupica went to the hospital, the doctors told Lupica she had choriocarcinoma and admitted her. “All through the night and the next day, there were tests,” she says, “and they found that it had spread to my right lung.” The day after that, she started chemotherapy with methotrexate.

CHEMOTHERAPY AND IMMUNOTHERAPY FOR PERSISTENT DISEASE


For women with GTN, curative treatment requires chemotherapy. Because the treatment usually works regardless of the size or stage of the cancer, patients are generally treated based on World Health Organization (WHO) risk score, Diver says.

“The key point is that someone with stage 4 choriocarcinoma can still be cured,” Dizon adds.

WHO risk score considers the following: age (over 40 is a higher risk than under 40); type of preceding pregnancy (a full-term birth is riskier than a molar pregnancy, a miscarriage or an abortion); time between pregnancy and diagnosis (sooner is better); HCG level (lower is better); tumor size, site of metastasis and number of metastases found; and whether the disease has already failed to respond to chemotherapy.

Lupica started with four weekly rounds of methotrexate, but her HCG levels continued to rise. She was resistant to the single agent, so her oncologists switched her to a multidrug regimen, which included etoposide, methotrexate and actinomycin-D, followed a week later by cyclophosphamide and Oncovin (vincristine), commonly referred to as EMA-CO. Finally, her HCG levels began to fall to those of a nonpregnant woman.

Today, Lupica is cancer-free. “I’m doing really well,” she says. “I have been blessed.” A testament to her health, she’s back to the demanding work of homeschooling her four children. But she continues to live with some of the side effects of such an aggressive regimen of chemotherapy: fatigue, neuropathy and some hearing loss.

Almost all low-risk and more than 80 percent of high-risk cases of GTN are curable with chemotherapy. But about 25 percent of women with high-risk disease become resistant to chemotherapy or relapse following treatment. For them, immunotherapy may bring another option.

This was the case for Melody Ransome, who didn’t know she had choriocarcinoma until 2 ½ years after giving birth to her son. She was 39 years old. By then, the tumors had metastasized to her liver, lungs, kidney, pancreas and brain. In retrospect, she recalls the warning signs of a persistent cough and a swollen abdomen. 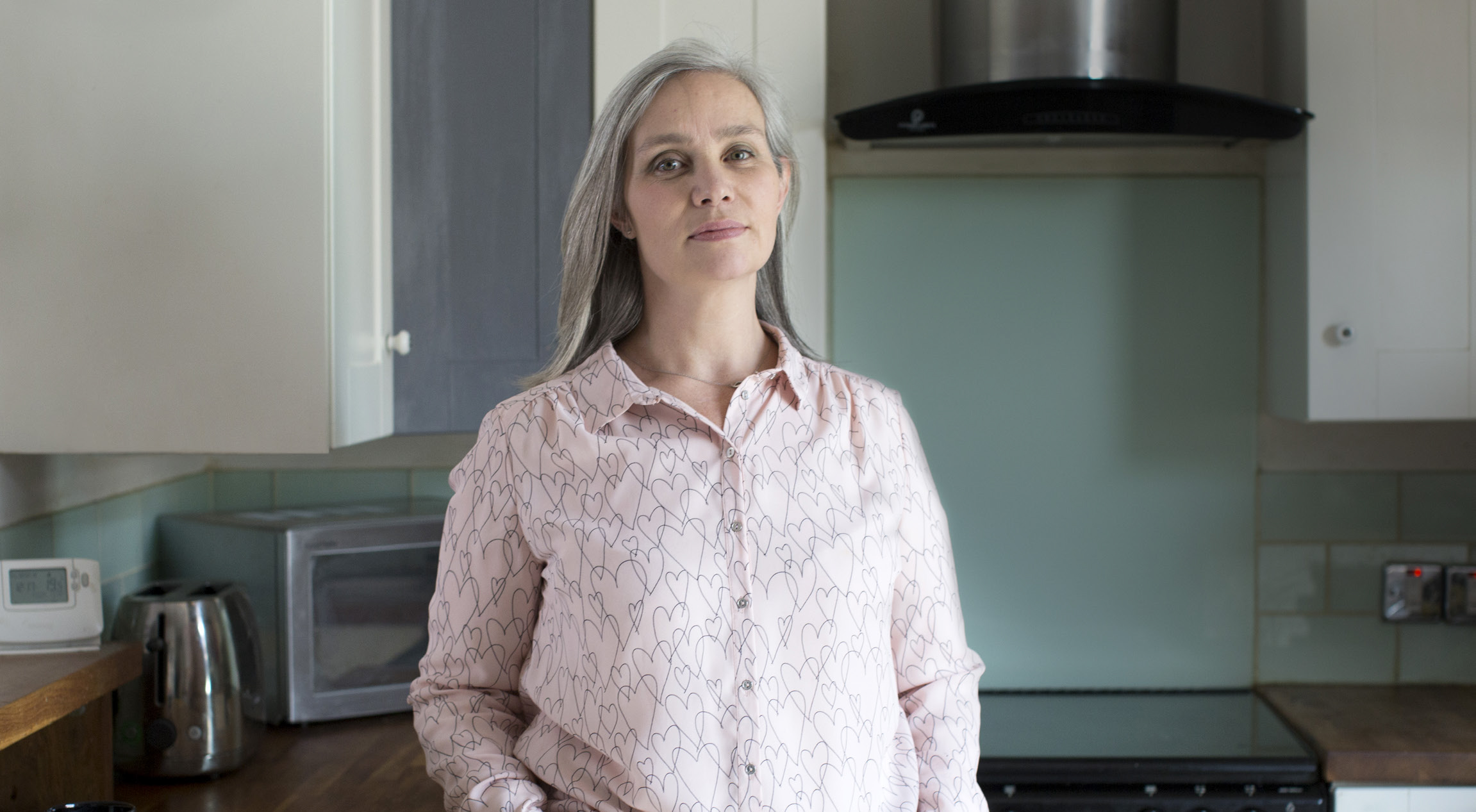 MELODY RANSOME is in remission, but is monitored by monthly urine samples and annual checkups. - PHOTO BY DAVID WOOLFALL
Still, the doctors at Charing Cross Hospital in London, where Ransome lives, were undaunted. “They showed me the 7-centimeter tumor in my uterus and said, ‘We know what this is, and we can treat it,’” she recalls. After chemotherapy, Ransome went into remission, but she suffered two relapses over the next two years. The cancer progressed through five different chemotherapy regimens, two stem cell transplants and the removal of one-fifth of her left lung. That’s when her oncologist tried the monoclonal antibody Keytruda (pembrolizumab), an immunotherapy agent that helps the body’s own immune system attack and kill cancer cells. An experimental treatment for choriocarcinoma, Keytruda is approved by the Food and Drug Administration to treat several other cancers, such as advanced melanoma, advanced non-small cell lung cancer and classical Hodgkin lymphoma. After the second infusion, Ransome’s HCG level had dropped by 50 percent.

“That was the moment I knew it was going to work,” she says. “In two months, I was in remission and have been ever since.” That was more than two years ago.

While Ransome didn’t experience serious side effects from Keytruda, she still deals with side effects of EMA-CO, including tinnitus and neuropathy. Doctors continue to monitor her HCG through monthly urine samples and see her for annual checkups.

In the United States, researchers are currently recruiting women with persistent gestational trophoblastic disease for clinical trials to test several other monoclonal antibody drugs. “We are starting to see case reports of incredible results in patients who did not respond to chemo,” Dizon says.

In extremely rare cases — most often after a normal pregnancy or abortion, but possibly after a molar pregnancy — a placental-site trophoblastic tumor can develop in placental tissue that then attaches to the lining of the uterus. This happens about once in every 100,000 pregnancies. Even more rare, epithelioid trophoblastic tumors can grow in the uterus or cervix. These cervical tumors can be misdiagnosed as cervical cancer. “These are incredibly rare,” Diver says. “Unlike other forms of GTN, these tumors don’t respond well to chemotherapy, and frequently, hysterectomy is recommended, unlike with the other types.”


When a woman is diagnosed with GTN, odds are she doesn’t have a girlfriend, sister or aunt who’s been through it. “‘Choriocarcinoma,’ ‘placental trophoblastic disease’ — these were words I’d never heard before,” Ransome says. Lupica didn’t know other women who’d had the disease, either. She started her own online support groups. “They’ve helped me heal,” she says. “And now, girls are pouring in from all around the world, and they’re getting the support they need.”
Print | cure Printing...