http://www.curetoday.com/publications/cure/2019/lung-2-2019/longtime-lung-cancer-thrivers
Longtime Lung Cancer Thrivers
Jeannette Moninger
In 2005, Jim Pantelas was 52 and looking forward to becoming a first-time dad when, two months before his daughter’s birth, he learned that he had lung cancer, the same disease that took his father’s life. “My dad was 67 when he died in 1980, just seven days after being diagnosed,” recalls Pantelas, who lives in Howell, Michigan. “I wondered if I would live long enough to see my baby born. And if so, would I be around to watch my child grow up?”

Happily, the answer to both questions turned out to be yes. Two weeks after receiving his diagnosis in September, Pantelas had a lobectomy to treat what was believed to be stage 1b disease. However, the surgery revealed a more dire diagnosis: stage 3b with stage 4 lymph node involvement. Pantelas then received radiation every day for 12 weeks and chemotherapy. His oncologist, Dr. Philip Stella, who provides care at Saint Joseph Mercy Health System in Michigan, worked the infusion schedule around the birth of Pantelas’ daughter that November. Pantelas and his wife named their baby Stella in honor of his doctor. 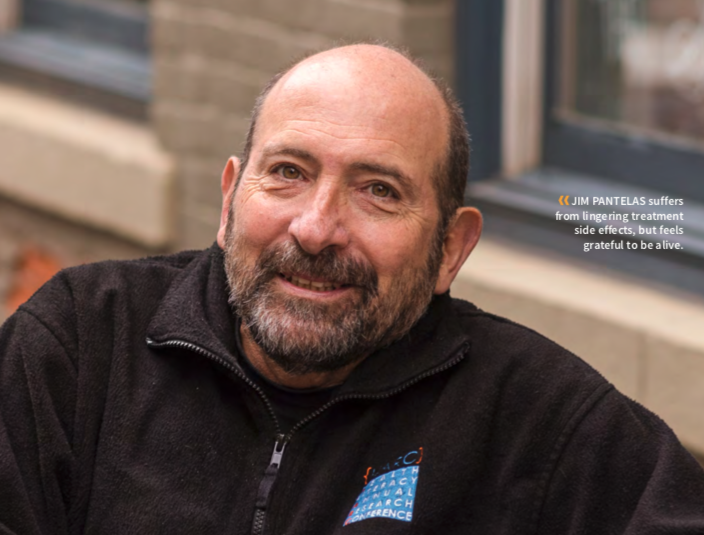 Pantelas has been in remission since completing treatment in April 2006, and Stella now has two younger sisters. “This life is not what I expected when I got my diagnosis,” Pantelas says. “I am grateful for every day with my family.”

Still, the going hasn’t been easy. Pantelas had to leave his job in information technology when lingering treatment side effects such as sinus infections, bronchitis, pneumonia and a weakened immune system left him ill and fatigued.

No longer able to work, the self-professed workaholic threw himself into volunteerism. Pantelas sits on several institutional review boards for lung cancer research and clinical trials. In September, he traveled to Kenya as a representative of A Fresh Chapter, a nonprofit organization founded by a breast cancer survivor that facilitates volunteer and leadership experiences to empower people affected by cancer. “My goal is to learn how the medical community views and treats cancer in Kenya and to see how we can help pediatric cancer patients get the best care,” Pantelas says.

Between the volunteer work and caring for his family as a stay-at-home dad, Pantelas has developed a new perspective. “I got my lung cancer diagnosis a month after Peter Jennings (a national television news correspondent) died from the disease,” he says. “I would sit in waiting rooms staring at his pictures on TV and magazines and wonder if his fate was going to be mine.”

In 2020, Pantelas will turn 67 — the age his dad was when he died. “I never would have thought that I would still be here 15 years after getting a lung cancer diagnosis,” he says.

TREATMENT BREAKTHROUGHS ADVANCE LIFE
Although lung cancer remains the leading cause of cancer deaths worldwide, advancements in treatments are helping people like Pantelas live longer and healthier than ever before. “Thanks to the advent of genomic tumor testing, we’ve seen dramatic changes in precision medicine and targeted treatments for non-small cell lung cancer (NSCLC), which is the most common form of lung cancer,” says registered nurse Rebecca Lehto, who holds a doctorate in nursing with a neuro-behavior concentration and is a cancer nursing researcher and an associate professor at Michigan State University in East Lansing.

Historically, treatment for advanced lung cancer included chemotherapy and radiation or, more often, a combination of these therapies. Chemotherapy, in particular, was viewed as a one-type-fits-all regimen, with everyone following the same protocol and receiving the same care. Today, people who receive a diagnosis of advanced NSCLC usually first undergo genomic or molecular testing to check for changes or mutations in tumors called oncogenes. Several somatic gene mutations, such as ALK, EGFR and KRAS, are commonly associated with the development of NSCLC and can likely be treated with a targeted therapy drug.


Armed with this information, doctors can tailor a treatment plan that is proven to be most effective against a patient’s specific mutation. “When I started in this field nearly 20 years ago, people with advanced lung cancer were living six to 12 months after diagnosis. Survival rates today are significantly improved,” says Dr. Alice Shaw, who holds a doctorate in genetics and is director of thoracic oncology at Massachusetts General Hospital in Boston.

She urges patients to ask her about survival rates instead of searching the internet. “Lung cancer is a very complex disease with different types and causes. Most of the statistics online today are outdated and don’t apply to a person’s unique circumstances,” she says. “With the incredible progress taking place these days, it’s almost impossible for anyone to accurately estimate prognosis. I certainly wouldn’t put stock in statistical data found online.”

FIGHTING FOR LIFE AND A FAMILY
Newlywed Emily Bennett Taylor took great pains to avoid online information when she received a stage 4 lung cancer diagnosis in 2012. “I was 28 and still in great shape from my years as a college athlete,” says the Long Beach, California, resident. Taylor decided to stay positive and have the upper hand against cancer. In her view, dire statistics based on other people’s circumstances would serve no purpose in her very personal fight. 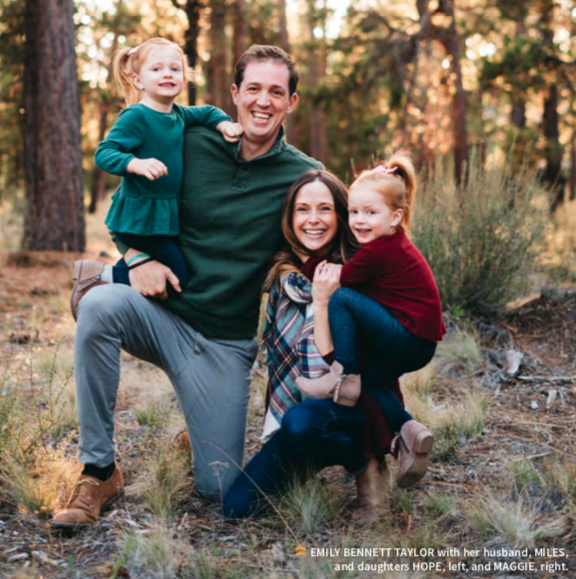 While Taylor and her husband, Miles, awaited results of genomic tumor testing, the couple began discussing their future. “I had always wanted children, and I didn’t want cancer to take my family away from me,” Taylor says. Before beginning cancer treatments, she took the first step of in vitro fertilization: having her eggs harvested, fertilized and stored. Taylor hung images of the frozen embryos in the couple’s home as a reminder that happy times would follow the dark days.

Unfortunately, genomic profiling of Taylor’s tumors didn’t show any known genetic mutations for lung cancer. Without these markers, Taylor wasn’t a candidate for the latest targeted therapies that are helping to extend the lives of people with advanced lung cancer. Chemotherapy was her only option, but even after six months of treatment followed by maintenance therapy, the odds of the cancer returning remained too high for comfort. “My doctor felt my best chances at having the life I wanted — parenting with my husband as we watched our kids grow up — was to try something radical like surgically removing the entire lung,” Taylor says.

She and her family turned to the GO2 Foundation for Lung Cancer, a nonprofit patient advocacy organization for survivors and their loved ones. The foundation helped Taylor locate a surgeon willing to do an operation that isn’t typically done on people with metastatic lung cancer. On February 8, 2013, Dr. Raja Flores, a thoracic surgeon at Mount Sinai in New York City, surgically removed Taylor’s diseased right lung, the linings of her chest cavity and lung, lymph nodes, a section of her diaphragm and the membrane surrounding her heart. The intensive surgery was followed by 28 rounds of high-dose chest radiation.

After Taylor had done all she could to fight the disease, the couple waited through two years of clean scans before pursuing their dream of parenthood. “Scanxiety is definitely very real and difficult to manage,” Taylor says. “We learned early on to schedule the scans first thing in the morning on a Monday.” That way, results often are available by the afternoon. Taylor says meditation — visualizing herself healthy and happy spending time with her family — helps her cope with scanxiety and the lingering fear of a cancer recurrence.

Through the help of a surrogate, the couple welcomed twin daughters, Hope and Maggie, into the world in April 2016. “Hope” was a word often used during her treatment, and Taylor was also treated at City of Hope Medical Center. Maggie was named after Taylor’s great grandmother. Mothering twin babies has been challenging for Taylor, who fatigues easily and requires a lot of rest. “When you’re used to being active and independent, it’s hard to admit that you need help doing even routine things like grocery shopping,” Taylor says. “But once I accepted my new normal and let people in to help, life became more manageable and enjoyable.”

When Taylor isn’t busy changing diapers and thwarting tantrums, she speaks at GO2 Foundation events and replies to emails from young people facing a similar diagnosis. People find her through her blog, Emily Kicks Cancer. “We originally created that site as a way to keep everyone informed about how I was doing with treatments,” Taylor says. “Now it’s a way to offer hope to others. When I was diagnosed, there weren’t a lot of positive stories about people surviving this type of cancer. I want to change that and inspire others to seek out the best medical care so they can fulfill their life dreams.”

MAINTAINING HOPE
In 2012, Susan Warmerdam was 47 when she learned she had stage 4 lung cancer. She was relieved when tumor testing showed EGFR and KRAS mutations: That meant her doctors could try new treatments that hadn’t been available to her father, who died of complications of the disease in 1999, 10 months after receiving a diagnosis.

Warmerdam began taking Tarceva (erlotinib), an oral targeted therapy drug. At the time, Tarceva was considered experimental as a first-line treatment for lung cancer; it was approved in 2013 by the Food and Drug Administration for patients with advanced NSCLC who had an EGFR mutation. Warmerdam was still in treatment. She also participated in a clinical trial for another drug that researchers hoped would slow or prevent resistance to Tarceva. “At first, I was reluctant to join a clinical trial — I didn’t want to feel like an experiment,” says Warmerdam, who lives in Chicago. “But then I realized that if other people hadn’t participated in the trial for Tarceva, the treatment wouldn’t have been available to me. Plus, you never know when the next new drug will be the miracle cure.”

For Warmerdam, Tarceva turned out to be her miracle drug. “My doctors said I had a ‘stellar and unforeseen response’ to the drug,” she recalls. The tumors shrank so much that she was able to have surgery in 2013 to remove the lymph nodes and adrenal glands where the cancer had spread. When testing showed no evidence of cancer in the removed tissue, she had a third surgery, a lobectomy, to remove part of her right lung in January 2014. Once again, that tissue showed no evidence of disease. Warmerdam has been off treatments and cancer free ever since.

“When I was diagnosed, doctors told me the cancer was inoperable and incurable. I was given a less than 2% chance of living another five years,” Warmerdam says. “Here I am seven years later, loving life. Had I taken some people’s advice to quit work and check things off my bucket list, I would be broke today — healthy, but broke.”

Warmerdam credits a large network of family, friends and colleagues for supporting and guiding her through the most difficult time in her life: “I immediately reached out to people who could help. I asked a nutritionist friend to revamp my diet. I asked a friend who’s a plumber to install water filters throughout my home.”

Throughout her treatments, Warmerdam continued to work at a financial investment firm to keep normalcy in her life. She formed a hope-and-healing cancer group at her church. Over the years, with the help of her network, she has raised more than $370,000 for the American Lung Association’s lung cancer research efforts.

“When people come to me for advice, I tell them I am proof that a lung cancer diagnosis is not a death sentence. Stay positive and hopeful because the next drug you need may be right around the corner,” Warmerdam says. “But you have to educate yourself so that you can be your own best advocate.”
Print | cure Printing...