When a parent has cancer, survivorship becomes a family affair.
BY Maureen Salamon
PUBLISHED November 24, 2014
A few minutes after learning she had breast cancer in 2011, Christine Egan marched up to the makeshift third-floor classroom where she and her husband home-school their children, to share the news. While she didn’t yet know all the details of her stage 2 diagnosis—for which she later underwent a lumpectomy, chemotherapy and radiation—she did realize that she wanted to be honest about the entire process with her children, who were ages 13, 11 and 9 at the time.

“This was something so tremendous there was no way I could hide it from my kids,” says Egan, a 46-year-old certified health coach from Bayport, N.Y., who’s now cancer-free. 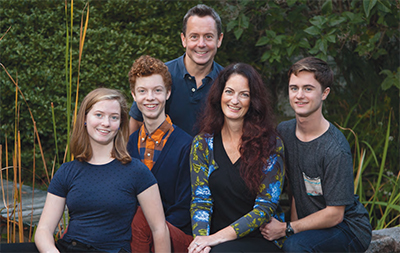 From the start, Christine Egan (second from right) was open about her breast cancer diagnosis with her family: husband Frank (center) and children Emily, Jack and Frank III (from left to right). Photo by Owen Kassimir.

As stunning as a cancer diagnosis may be for an individual, cancer is ultimately a family affair for the 14 percent of survivors who, like Egan, are living with children under 18 years old, according to National Cancer Institute estimates. These youngsters need their own form of healing from the emotional strain of a serious diagnosis, uncertainty about its course, and upended family routines. And just as issues remain for patients moving into survivorship, so too do they remain for their children.

Research indicates that children of all ages may face challenges adjusting to a cancer diagnosis, and an August 2014 study in the journal Cancer by Birgit Möller and colleagues noted that children of cancer patients are especially vulnerable to developing emotional and behavioral problems because of the disruption to the family that cancer brings. As a result, the study recommended identifying families most in need of psychosocial support and providing not only family-oriented services, but also child-centered services, focusing on family dysfunction to prevent mental health problems in the children.

“I think it’s important children are told as much as they can handle,” says Lynnette Wilhardt, a licensed clinical social worker and director of clinical services for Kids Konnected, a nonprofit organization based in Laguna Hills, Calif., that offers counseling, camps and other support to children whose parents have cancer. “I equate it to the ‘sex talk’—they’ll walk away when they’ve had enough.”

After addressing their immediate worries about how sick mom or dad (or aunt, grandparent or other family member raising them) is, and how the illness will affect their own lives, most children need regular assurances throughout treatment that everything medically possible is being done to deal with the malignancy, says Sue Heiney, a professor of nursing and co-director of the Cancer Survivorship Center at the University of South Carolina College of Nursing in Columbia, S.C. This information needs to be repeated as kids get older, if only because children can absorb more— possibly triggering heightened worries—as months and years pass.

According to Heiney, co-author of Cancer in Our Family: Helping Children Cope with a Parent’s Illness, published in 2013 by the American Cancer Society, the normal spectrum of kids’ possible reactions depends on their ages, but can include resisting naps and bedtimes, clinginess, inattentiveness and arguing more with siblings. More serious reactions that may require professional help, she says, include nightmares, bedwetting, lower grades in school and talking back to parents. A parent’s illness may present unique challenges for older children, including preteens and teenagers, whose worlds are broadening and who consider peers increasingly important. Teens may be resentful, angry and confused about changes in their family life but unable to express their feelings as they test out adult emotions and responsibilities.

With a record 14.5 million cancer survivors in the United States today—almost two-thirds of whom, according to the American Cancer Society, received their diagnosis more than five years ago—chances are good that most children know someone who has had the disease. But when cancer hits home, even the awareness that it’s increasingly beatable doesn’t inoculate kids from significant psychological effects.

Just as many cancer survivors discover that the end of treatment doesn’t spell the end of cancer’s impact on their lives, so too do their children. Finding a “new normal” can be challenging for all family members, especially for kids old enough to understand that sometimes cancer comes back.

Tailoring information to children’s ages—from simple to more complex, but always honest—remains the goal as a parent transitions from patient in treatment to survivor, Heiney says.

“Ideally, the cancer experience would be integrated into family life and would be a topic of discussion at various times, including (follow-up) surveillance such as a mammogram or colonoscopy,” she says. “The parent needs to avoid the cancer diagnosis being a family secret, but during survivorship it does not need to be a focus of life.”

Egan uses psychotherapy to manage her own fears of recurrence, an approach akin to parents donning their own oxygen masks on a plane before attending to their children. “If parents are OK, the kids are OK—that’s what we usually say,” explains Heiney, who agrees with other experts that counseling for children—which can include individual or family therapy—can be helpful, but isn’t a must unless they’re exhibiting unusual anxiety or other behavioral problems. On the other hand, support groups for children can help normalize the experience and decrease isolation the child may feel, she says. These groups are not intended as therapy, but to help the child cope.

"Tailoring information to children’s ages—from simple to more complex, but always honest—remains the goal as a parent transitions from patient in treatment to survivor." —Sue Heiney

As Heiney recommends, Egan uses her periodic follow-up tests as a springboard for ongoing conversations with her children about her health. But she says they haven’t seemed anxious about what survivorship means or what the future may hold.

“They know cancer can come back, since people are always coming to me for advice when they’re diagnosed,” Egan says. “I think they buy into my message...that cancer sucks, but how can you deal with it? They don’t ask about recurrence... they see that I work on my health every single day.” Heiney contends that most children aren’t as worried about an eventual return of the cancer as they were initially about their parent dying. Still, bringing these fears to the surface instead of bottling them up is a skill like any other that parents can teach and nurture, she says.

Another way to broach survivorship is by participating as a family in an awareness event, such as National Cancer Survivors Day, where the parent’s story can be told, Heiney says.

“I would really impress that this is an opportunity for a family,” says Wilhardt, director of clinical services for Kids Konnected. “Embrace the fact that the whole family is going through this. Our instinct is to protect our kids, but we have to trust that they can handle this and, more importantly, they need to be given the respect to go through this with us.”

During treatment, family roles often realign as members assume new domestic or financial responsibilities to alleviate stress on the ill parent. Teens in particular may end up nursing the parent with cancer, “parenting” younger siblings, or taking on tasks such as house maintenance or meal prep—a shift that can provoke anger at cancer’s impact on their growing-up years. “If teens in the family are given additional responsibilities, we advocate trying to balance that with giving them additional privileges,” says Meredith Cooper, executive director and co-founder of Wonders & Worries, a nonprofit organization based in Austin, Texas, that supports children through serious parental illness. “So if they’re responsible for picking up siblings after school, for instance, maybe their curfew can be extended. This validates to them that they’re meeting those responsibilities well.”

But new burdens, both physical and psychological, can prove crushing in families already in crisis before cancer strikes, whether from divorce, addiction, abuse or financial strain. Numerous studies, including the one by Möller and co-authors that appeared in Cancer in August, have found that general family dysfunction is the strongest predictor of emotional and behavioral problems in children whose parents have cancer, not the cancer diagnosis itself.

Talking Points:
> Children should be told about a parent’s cancer and given regular assurances that everything medically possible is being done to treat it.
> A parent’s cancer can mean a reshuffling of familial roles, which will require some emotional adjustment for both adults and children.
Be the first to discuss this article on CURE's forum. >>
Talk about this article with other patients, caregivers, and advocates in the General Discussions CURE discussion group.