Humor Is No Joke

All the same, she recommends that cancer survivors and previvors (who are predisposed to cancer but haven’t had it) use humor to ease some of their stress.

“It’s like when you’re in pain and you take a painkiller. It not only relieves the symptoms of pain for a short period of time, but it also gives your body some resting space that it needs to do the healing work that it can do,” says Moon, a writer, musician and performing artist who spoke about using humor to cope with cancer during the June annual conference held by Facing Our Risk of Cancer Empowered (FORCE) in Orlando, Florida. The organization is dedicated to improving the lives of people affected by hereditary breast, ovarian or related cancers.

“We’ll go crazy if we’re caught up 100 percent of the time in the stress of what’s going on,” Moon says. “At this conference, everyone’s got a story, everyone’s been through something, and we shouldn’t feel guilty about taking respite. Actually, there are many studies that prove
that laughter and humor have definite healing effects. They improve your state of mind, your physical state, and lead to healing.”

In an interview with CURE, Moon shared some cartoons she created about her experience as a cancer previvor, recounted that journey and discussed her perspective on the importance of humor in healing. 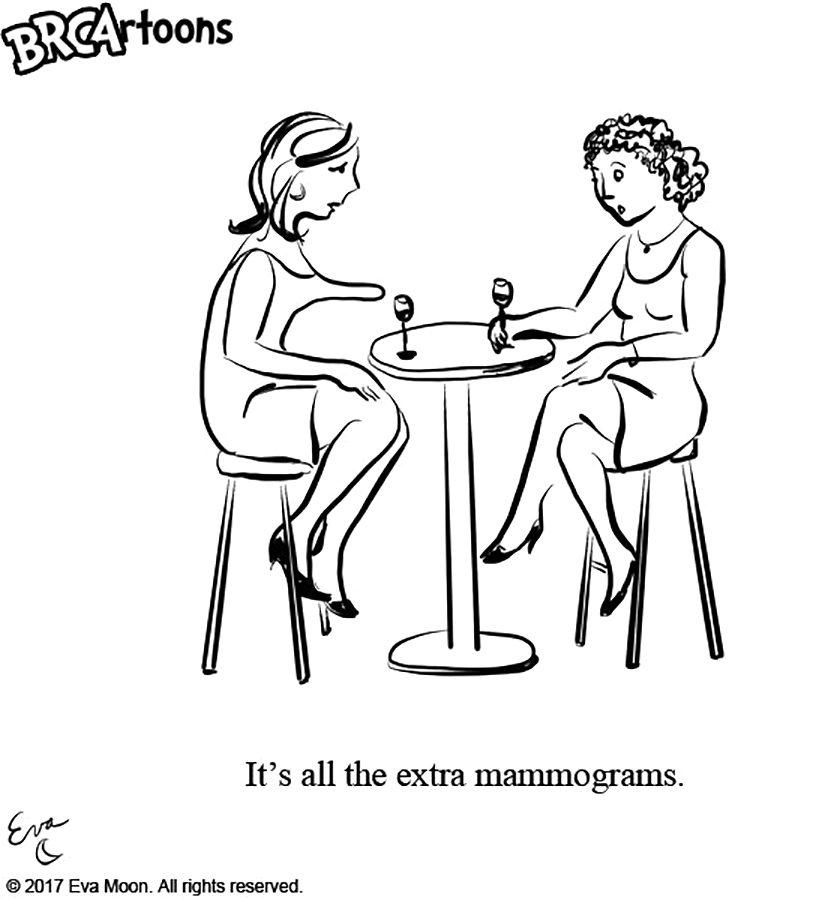 CURE: How have you been affected by cancer?

Moon: In 2011, I found out that I was positive for a BRCA1 gene mutation that predisposed me to breast and ovarian cancers. My mother’s cancer had come back, and they tested her and she was positive, so my sisters and I all got tested. They’re negative, thank goodness; I’m the special one, which is all right, because I love attention.

I made the decision to have a preventive double mastectomy and hysterectomy.

I grew up assuming that I would die of cancer, because there was so much of it in my family. Now here I am at 61, still alive, and I plan to be alive for quite some time to come.

How did your genetic testing results affect your creative work?

At first, I stopped my writing and creative activity to try to get through my surgeries and take care of my mother, who was dying. I didn’t want to write about it, but then I wrote a song about how I was feeling. When I sang it for my husband, it was the first time he really got what I was going through. Then I wrote another song, and a friend told me, “You should do a show.” I thought, “No, I don’t want to do a show,” but then I came home and I started writing, and a week later I had a show, so obviously what I was feeling needed to come out. I finished in time to do my first performance in my mother’s hospice room, just a few days before she died. I’ve performed it a lot of times since then, but nothing’s going to beat that for just what it meant to me to be able to share that with her.

Tell us about the show.

The show is called “The Mutant Diaries: Unzipping My Genes,” and it’s an hour-long, one-woman musical comedy. It’s got nine songs, and I tell the story of everything I went through, and hopefully show other people that you can come out on the other side of this, and that there are great things that can still hap- pen. It feels overwhelming when you’re in the middle of it, but at some point you’re not in the middle of it anymore, and then you can look back and have a different perspective. I’ve been fortunate to perform the show for many people across the U.S. and England to give them that message. I’ll be performing it at FORCE’s 2018 conference in San Diego.

If someone wants to bring me out to do the show for their group, as long as I can cover my expenses, I’ll go anywhere. All I need is a piano or a decent keyboard. I also have a DVD of the show that’s available on my website, evamoon.net, at mutantdiaries.com and also on Amazon pay-per-view.

What was it like for you to write the show?

Like a flood. I’d been resisting it for a while, but it had been building up. I was at a session here yesterday on reinventing yourself after surgery, and people were asking: “How do you get out of that interim stage between letting go of the past and moving forward into a new beginning?” For me, it was giving in to that urge to create something, and so I encourage people to do that. I use music and writing and humor, but someone else might use painting or dance or photography. If you find yourself having an urge to do something, even if it seems ridiculous to you, give in to it and just go with it and see where it takes you.

I was talking to someone yesterday who said that, after her surgery, she had this urge to take up photography, and she didn’t do it because she thought it was frivolous. But that urge is coming from somewhere, and it’s a message. The worst that can happen is that you’ll take some pictures and you’ll get over it and go on to something else, but maybe it’s the start of something new for you.

Was doing this show something new for you?

I had run a graphic-design business for 25 years and a web design business for 20 years. I took a leave and got through all my surgeries. I’d always done music and theater as a sideline, and after I recovered and was writing “Mutant Diaries,” I talked to my husband and said I just couldn’t face starting over with my web design business, and asked how he would feel about my trying to make a go of my creative work. He said, “Go for it,” because he was working at Microsoft, and it’s not like the money I was making meant the difference between dinner and no dinner. I was very fortunate in that way, and I’ve been writing and performing, traveling and doing “Mutant Diaries.” I’ve been writing for Huffington Post for a few years, I play in a band and I’ve written three screenplays which I’m trying to shop in Hollywood. They’re all comedies. They’re not literally about my journey, but a lot of what I write about now comes out of things I learned during that experience.

For instance, I wrote a stage musical called “First You Jump” that consists of five stories about people making extraordinary decisions when they can’t know what the results will be; they just have to jump and live with what happens. None are about having a mastectomy, but
all came out of having to make that decision without ever knowing if it was right, or what would have happened had I decided differently. Everyone faces decisions like that, turning points. Those moments fascinate me, so they show up in my writing.

Do you worry that people will be offended when you joke about cancer?

I worried about that when I found out I was BRCA1 mutation-positive. I was in the sea of despair, and about a week in, I was chatting online with a friend and he wrote a limerick about what I was going through. I won’t say that I laughed out loud, but I recognized that it was funny, and so I wrote one back to him, and then we started writing them back and forth to each other, and before I knew it, we were giggling, and I felt better and wanted to share this.

I had just joined the FORCE website online messaging boards, and I wanted to post these limericks there, but I was worried that people might be offended that I was making light of something so 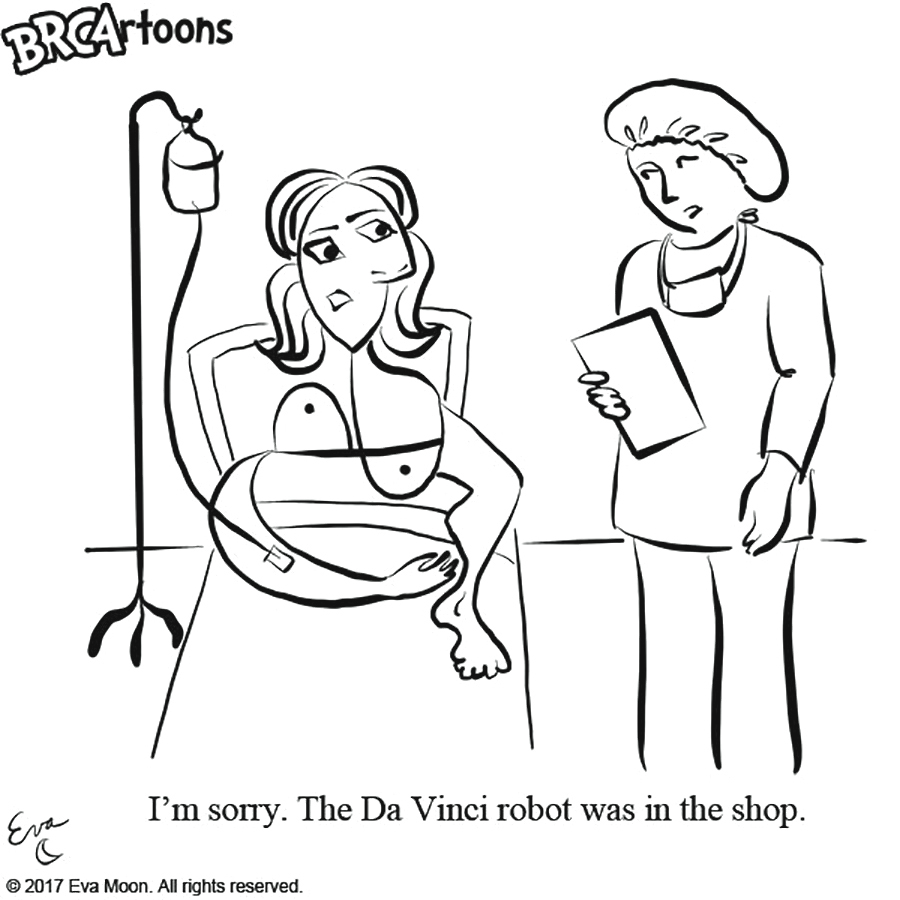 serious as cancer. But I couldn’t resist it, so I posted three limericks with a big warning, and I didn’t get one single negative response. People loved them, and started writing their own. It just unleashed this limerick monster, and by the time the dust had cleared there were over 300 limericks in that thread. It’s still there on the message boards. Women all over the world wrote them and shared them and talked about how grateful they were to have something to smile about.

What does it mean to you to know that your creative efforts are inspiring people within the cancer community?

You never want to feel that something you’re going through is pointless, and that there’s never going to be an upside to it. I’ve gotten so many blessings from this journey, because it’s been so gratifying to be able to help other people in a small way. They’re going through so much, but it’s good to have a little relief and to know you’re not alone. It’s a connecting thing to share these thoughts with other people.

How has FORCE helped to shape your journey?

FORCE was lifesaving to me. I joined the message boards even before I got my test results, and met so many women who had gone through this before me and could talk me off the ledge, help me explore my options and share their experiences. Now, it’s such a pleasure to be able to talk to other women and say, “You’re going to get through this,” to share my experience and pay it forward.

To meet these women in person is a treat. There are 600 people here, and we’re all sisters. You can just be so open. Last night at show and tell, I was showing my wonderful reconstruction that I’m very happy with, and I was perfectly comfortable standing and talking to people with my shirt off and saying, “Go ahead, touch them and see what they feel like.”

Where else can I be so open, and where else can other people be so open? My friends and family were incredibly supportive, but they hadn’t been in my shoes. Everyone here pretty much has been in my shoes.
Be the first to discuss this article on CURE's forum. >>
Talk about this article with other patients, caregivers, and advocates in the General Discussions CURE discussion group.