Dealing With the Pride and Toughness of a Soldier With Cancer 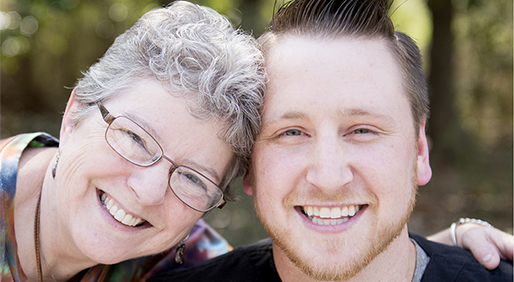 Carol Kelly and Ross Foote, OCN - PHOTOS BY MELINDA HUNLEY
Having been through cancer myself, I was unfortunately familiar with the procedures. So when my husband, George Carson, was diagnosed, we knew the general routine. What we didn’t expect was for his therapy to be so severe. Being a Vietnam combat veteran, he was trained to not ask for help and never give up. So when he was given a 20 percent chance for survival, we dug in and went to work.

George started intense radiation and chemotherapy for inoperable lung cancer. Ross Foote was the nurse who first took his case. There was trouble with the IV for the chemo, but Ross was extremely competent and able to work out the issues, reassuring George at the same time. Ross instinctively knew that, in dealing with a soldier, there is a lot of pride and toughness. Ross was able to relate to George on that level. He took time to find George’s interests and found common ground in discussions about football. As they favored different teams, it created a running thread of conversation that eased the pain, fear and tedium that comes with chemotherapy.

As time and therapy continued, Ross made it a point to always be in the lab on the days that George was scheduled. When the radiation blistered George’s back, Ross was there offering help and support. Eventually, George needed a feeding tube inserted. Ross explained what was being done and why. I don’t believe George could have accepted the therapies recommended had it not been for Ross. Ross stayed late the day George had the tube inserted, just to make sure all was going well, and to let George know that he cared. By this time, there were tumors in George’s esophagus. Ross was promoted to an administrative position, but he still came to the lab every time George was scheduled. He would help out if needed or just spend some time with George, joking and talking about anything George wanted.

George finished his treatments and seemed to be doing quite well. The tumors were shrinking, and George was able to breathe again, though he still had the feeding tube. Ross and his wife had a baby about this time and were considering two names for the baby, one of which was Carson, after George.

George died at home unexpectedly last July, one week after his final chemo treatment. As soon as Ross heard about George, he sent a beautiful card to me. It was a personal one that he selected and mailed. Since then, he has been in contact through email, making sure I am OK and sharing photos. He stays in contact with me, even though more than a year has gone by since George passed.

Ross’ concern is genuine, and his efforts to ease the suffering of others are a part of his character. It is evident every time you speak with him. He is obviously a leader, as the other nurses show tremendous respect for him. I am nominating Ross in order to bring some recognition for the man he is and the people he has helped. With all of the “bad press” given about the Veterans Administration, Ross and the other nurses at the Jack C. Montgomery Medical Center in Muskogee, Oklahoma, are shining lights in the darkness of so many veterans’ lives.
Be the first to discuss this article on CURE's forum. >>
Talk about this article with other patients, caregivers, and advocates in the General Discussions CURE discussion group.