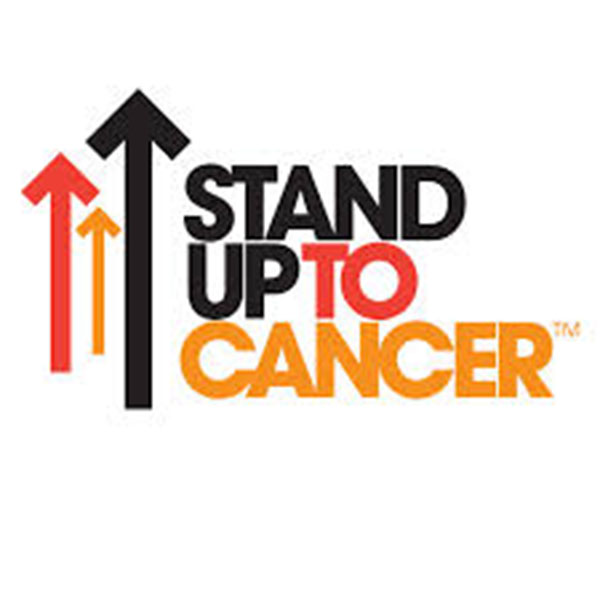 Colorectal cancer is the second leading cause of cancer death in the United States, in men and women combined. In 2016, an estimated 134,490 Americans will be diagnosed with colorectal cancer (CRC) and 49,190 will die of this disease.  When CRC is diagnosed at an early, localized stage, the five-year survival is 90 percent. However, just over a third of people with CRC are diagnosed at this early stage.

Stand Up To Cancer, the initiative founded in 2008 by nine women from the entertainment industry, seeks to accelerate the pace of research so more cancer patients become cancer survivors. With advances in technology and other areas, researchers are closer than ever to the kinds of discoveries that can end cancer. But they need more funding and easier ways to collaborate on specific research projects with colleagues at other institutions — to work as part of "Dream Teams" and other collaborative teams. That's what Stand Up To Cancer is all about. Each January, at its annual Scientific Summit, researchers from SU2C’s 19 Dream Teams, as well as other members of the SU2C scientific community, gather to report on their progress. Three of those 19 Dream Teams and one smaller Translational Research Team, are working to improve detection, diagnosis and treatment of CRC and are making significant progress to accelerate turning their research into benefit for CRC patients.

With only 39 percent of CRC patients diagnosed at an early, localized stage when the cancer is more readily and effectively treated, increasing screening and early detection is critical. Colonoscopy screening, for example, is a gold standard for the early detection and even prevention of CRC, because pre-cancerous polyps can be found and removed during this procedure. However, some individuals may be unwilling to undergo this procedure.  There are a variety of screening tests available. Screening tests for hidden blood in stool have been widely used in the United States, Western Europe, and Asia and offer another effective option for CRC screening. However, these tests are not as sensitive in detecting pre-cancerous polyps as they are for detecting cancer. Recently, a new stool test that adds analysis of DNA from cancer cells shed from the colon wall was approved by the U.S. Food and Drug Administration. This new test showed improved sensitivity and great promise as another option for CRC screening.

While the cancer community continues to seek increased participation in screening, researchers continue to improve screening.

The Stand Up To Cancer-Dutch Cancer Society Translational Cancer Research Dream Team is working to improve molecular stool-based tests by using the best combination of cancer-associated DNA and/or protein biomarkers, so that these tests can go from individual screening to population-level screening. This new test will be compared directly against the current test in 10,000 individuals participating in the Dutch national population-screening program for CRC.

This Dream Team is also aiming to develop a molecular blood test for circulating DNA associated with cancer. This test would improve identification of patients who may have a poor prognosis with surgery alone, even though their disease is early stage. While patients with early- stage disease generally do not receive chemotherapy after surgery because 80 percent survive the disease, the SU2C-DCS Dream Team hopes to develop a molecular blood test that identifies the other 20 percent of patients with early-stage CRC whose survival may be improved by chemotherapy after surgery.

“When my late husband Jay was diagnosed with colorectal cancer more than 18 years ago, the first-line treatment was the same drug that had been used since the 1950s, which was so frustrating,” said SU2C co-founder Katie Couric.

Today, there is more hope, as several treatment options are available for people who have metastatic colorectal cancer (mCRC). Despite this progress, mortality rates from this disease are still too high and more effective and personalized treatments are needed. This is why the Van Andel Research Institute-Stand Up To Cancer Epigenetics Dream Team is pursuing a specific combination of drugs to treat mCRC with hopes that more people will respond and survive their cancer.

This VARI-SU2C Dream Team is investigating a novel drug referred to as “SGI-110” that is new and not yet approved for consumers. SGI-110 is an epigenetic treatment that works to modify how genes are turned on or off in cancer cells and it seems to be able to make the cancer more receptive to treatment with subsequent chemotherapy or other medicines. The VARI-SU2C Dream Team is exploring the potential of this novel drug in patients with advanced CRC who have developed resistance to the drug Camptosar, currently a “first-line” treatment that blocks tumor growth, in combination with other drugs, for mCRC.

A second SU2C-DCS Dream Team has developed a groundbreaking technology that allows researchers to take tumor samples from patients and then grow and maintain mini tumors in the laboratory called tumor organoids. These tumor organoids allow researchers to study the sensitivity and resistance of patient-specific tumors to different anti-cancer drugs. This is the promise of precision medicine, the ability of researchers to devise treatment approaches that are specific to the genetic and molecular profile of individual patients and their tumors.

This SU2C–DCS Dream Team has grown a “biobank” of 86 CRC tumor organoids and counting, including nine different CRC metastases, many of them paired with non-cancerous colorectal tissue from the same patients for comparison. They are characterizing the genetic and molecular make-up of each organoid, and are screening those organoids to determine the most effective drug(s) and to understand the biology of why tumors respond different to treatment. And another SU2C-DCS supported team is also working to improve colorectal cancer treatment focusing on drugs called EGFR inhibitors that can stop tumor cell growth. By comparing the molecular make-up of tumors that are EGFR inhibitor responsive to those that are not, the team hopes to develop combination approaches to improve patient responses to this class of drugs.

These teams are giving new hope and a sense of optimism that we can find improved methods for early detection and prevention — and more effective approaches to treatment of this deadly disease. To stay up to date on all of our teams’ progress and to learn more about Stand Up To Cancer’s collaborative model of research go to www.standup2cancer.org.