From Brave To Fearless: How Volunteering In Peru Shifted My Cancer Perspective

Traveling helped me remove myself from the storyline of cancer and reconnect with the world around me.
BY Linnea Olson
PUBLISHED September 03, 2019
Every once in a while, something comes along that changes everything. 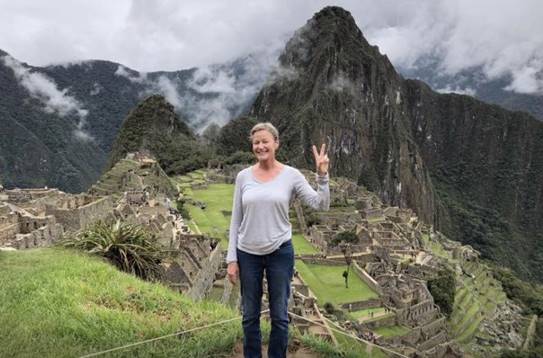 When Terri Wingham, founder of the nonprofit A Fresh Chapter, reached out to me to see if I might be interested in a fellowship for a program in Peru, my immediate response was “heck yeah.”

A Fresh Chapter (AFC) is a nonprofit that facilitates life-changing volunteer and leadership experiences to empower people impacted by cancer to discover new possibilities, community, and purpose. Through AFC, participants see that struggle is universal and connect to a supportive community while they redefine their future.

The opportunity to travel to a foreign country held enormous appeal to me. The details were less consequential. Including the fact that I had been living with stage 4 lung cancer and was enrolled in my third, first-in-human trial for an experimental therapeutic.

Honestly, I had no idea what I was getting myself into, but I was game.

I barely made it to Peru, between credit card fraud rendering me unable to call a planned Uber and leaving my arrival packet at home (which contained all the pertinent details to meet with AFC program leaders upon arrival). As you might imagine, I was extra grateful when I landed and realized how thoughtfully planned the trip was.

Terri, AFC’s founder and CEO, and her team took care of all the details. For the next two weeks, all I had to do was show up, allowing a state of engagement not so dissimilar from childhood. I would fall into bed each night exhausted, but I would also arise each morning excited to see what wonders the day would hold.

My “tribe” — a nickname for program participants — consisted of twenty individuals with varying forms of cancer. Half of the group were Eli Lilly and Company volunteers, some of them directly involved in cancer research and drug development. This was my first opportunity to engage with ambassadors from a pharmaceutical company without an agenda other than that which was personal. In addition, we were on totally equal footing, because we’d all been smacked upside the head by cancer.

Each of us was assigned to a volunteer position. I worked both at a senior center and in the kitchen for a cancer hospital. The communities we were working in were disadvantaged to a degree that was both shocking and totally unfamiliar to me.

At this point, I had been living with advanced lung cancer for more than twelve years. I had faced some extraordinary challenges — but with all the advantages that come from living in an affluent country like the U.S. The people I encountered in Peru and the hardships they were facing blew my mind and my heart wide open. And yet I felt so incredibly connected with everyone I interacted with. Feeling vulnerable (out of my element) yet strong (volunteering) was a potent combination. The kitchen I worked in remains one of my happy spots — peeling, chopping, washing, serving; the smells and the sounds. A language that was foreign to me and yet the implicit understanding that comes from shared humanity.

As for my tribe, the bond we formed was extraordinary, which I believe was due in large part to the fact that we were in extraordinary circumstances. How often does a group of people come together to volunteer in another country with a diagnosis of cancer as the single common denominator? And not only did we work together, we shared rooms, meals and a circle daily. Perhaps my biggest contribution was the suggestion that we all join in a group hug, something that became a bit of a cherished ritual.

In addition to volunteering, each tribe has an opportunity to visit a magical place. In our case, Machu Picchu. When you take into account that a number of us had advanced cancer and were in treatment, and yet we all managed to summit Machu Picchu, you get a picture of both how surreal and empowering this experience truly is.

A Fresh Chapter is also about the ripple effect  the expectation being that upon our arrival back home, we would spread some of that magic around. I’d like to say I’ve honored that expectation. I am not the person now that I was then. I regard my life as “before Peru” and “after Peru.”

Already brave, I am now fearless and incredibly confident of my own ability to adapt and prevail. But most importantly, I learned to hold space, a concept that Terri taught. I was able to remove myself from the storyline of cancer. This life is not just about me. The resultant loss of ego has led to a much stronger connection to the world around me. Kind of like one giant group hug.

A Fresh Chapter has helped hundreds to take back their lives, and Terri and AFC are only getting started. AFC is working to develop an online model that will scale the non-profit’s impact to reach thousands of Americans in dispersed communities across the U.S., as well as those who may not be healthy enough for an immersive travel experience, looking to start their fresh chapter.

Linnea Olson is an artist/writer/advocate/activist who has been living with lung cancer for over 14 years. Since her trip to Peru with A Fresh Chapter in 2017, Linnea has been sharing her journey in hopes of helping others with a similar story. She also blogs at www.outlivinglungcancer.com.
Be the first to discuss this article on CURE's forum. >>
Talk about this article with other patients, caregivers, and advocates in the Lung Cancer CURE discussion group.