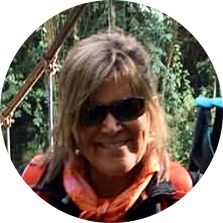 I work for the Multiple Myeloma Research Foundation (MMRF), as the Director of Partnerships and Business Development. I have been with the MMRF for over 10 years, having come to start and oversee the MMRF Endurance Program for several years prior to my current position.

I’ve run 10 marathons, several of them side by side with myeloma patients, caregivers and myeloma medical professionals. I was not a hiker until we started the Moving Mountains for Multiple Myeloma program, beginning in 2016, with an eight-day hike up and down Mount Kilimanjaro. Since that time, we have been on six other epic treks (seven, including this one), and have raised over $1.5 million – 90% of which goes directly to research to find a cure for this difficult disease.

I have had the honor of taking part in five Moving Mountains for Multiple Myeloma treks (most recently to Everest Base Camp in March, 2018!) and am so inspired to walk alongside patients, caregivers, family members, doctors and nurses — a microcosm of the myeloma community — as we take on these awesome climbs.

I'm so proud to be a part of this program, which is demonstrating that patients are not only living longer, but are able to take on incredible experiences that they never dreamed possible when they were newly diagnosed. I'm so honored to be a part of the action, alongside myeloma loved ones, that is making a huge difference in terms of awareness and funds raised and the life expectancy and quality of life for myeloma patients.

Let the adventure continue! Next up: Havasu Falls/Grand Canyon!

Yes, we are indeed moving mountains, but those of you who have experienced a Moving Mountains for Multiple Myeloma climb know how much the mountains move us, especially when we climb them together with others that are so passionate about and who take an active role in finding a cure!