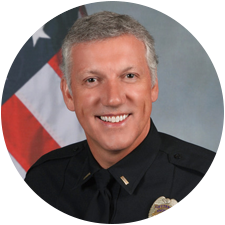 In 2014, my younger brother, Jeff, was diagnosed with multiple myeloma. The diagnosis stunned our close-knit family and sent us into research mode on the internet to learn about this blood cancer that we were unaware of the day before. We quickly found the MMRF website and saw the work that was being done to give much hope to patients and their families.

In December 2014, I traveled with my brother and family to Vanderbilt Medical Center, where Jeff underwent a stem cell transplant a few days after Christmas. For the next month, Jeff’s wife Amy and I shared the role of caregiver as Jeff stayed in an apartment close the medical center. Those first weeks after the transplant were miserable for Jeff, but he continued to get stronger and we were able to come home to Knoxville in late January.

Our Father was sworn in as a Knoxville Police Officer in December of 1965 when I was three months old. Jeff and I chose to follow him in this career path that we see as a calling instead of a profession. I’m blessed to be able to work daily with my brother in the attempt to do some good in the world.
Moving Mountains for Multiple Myeloma is important to me as I see it as a public way to support not only Jeff but all patients suffering from this cancer. I hope that our journey inspires patients around the world and gives them hope.