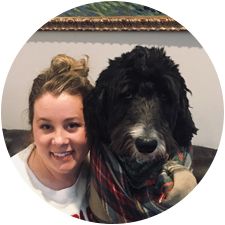 My father in law, Lynn, was diagnosed with multiple myeloma in late June 2014. At the time my husband and I were living in Denver, but we had come home in June for a golf tournament (Lynn and my hubby are avid golfers). Lynn had been in terrible pain with what he thought were kidney stones. He had been in and out of the ER and his regular doctor for a few weeks leading up to our visit. True to his nature, Lynn pushed through the pain to participate in the tournament and spend time with us. Although we could tell he was not well, we were hopeful he would pass the stones and everything would return to normal. His doctors ran a series of tests, blood work, MRI's, all that would eventually lead to his multiple myeloma diagnosis. Lynn immediately started treatment.

I was pregnant with our daughter at the time of his diagnosis – this would be Lynn's first grandchild. The pregnancy was a source of joy and distraction during his initial treatment and he was “well enough” to make it out to Denver for her birth. He completed his first stem cell transplant in December 2014 and his second in April 2017. We were lucky enough to be with him during his second transplant in Omaha and now we live just down the street from him. My daughter and he have a great relationship; it's a special bond and to be able to witness it every day is truly amazing. Not that anyone cares, but he took her to see The Little Mermaid this weekend, just the two of them! It's those moments that inspire me to make the trek up Mount Washington.

I found out about the trek through a video my mother-in-law posted on Facebook. I instantly felt a connection to the hiking part having lived in Colorad and was compelled to apply. The fundraising part made me a bit anxious at first but everyone has been extremely generous thus far. One of the coolest things about fundraising has been reconnecting with a few friends from my past who had a multiple myeloma diagnosis in their family, they have made a donation in their family member’s honor.

My family is traveling with me to New Hampshire and will be cheering us all on! I look forward to experiencing this with them and all of you.