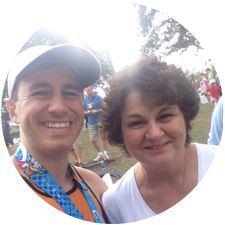 After having increased, unexplained back pain, my mother, Janet Infante, was told that her pain was coming from a plasmacytoma and was diagnosed with multiple myeloma. I remember talking to my mom on the phone that day when she delivered the news. She somehow remained optimistic even after knowing she had just been diagnosed with cancer. That was her. An optimistic, caring person whose passion for life and family is like no one else I know in my life. This would be the start of the hardest times of her life, yet she somehow stayed positive and hopeful for the future.

Being a teacher and guidance counselor, my mom quickly became well educated on everything related to myeloma. She felt that education for the disease would be one of the most important things when taking on this new battle. She learned everything about the disease, the available treatments and the organizations fighting for a cure. In 2014, she approached my entire family with a dream. She wanted us to run the Disney half marathon and raise donations for the Multiple Myeloma Research Foundation (MMRF). At first, everyone was hesitant but with some motivation from my mom, we joined together to complete something none of us had ever thought we’d do. Thinking, back, this was one of the happiest moments of my mom's life. Not only were we running for her, but we were running at Disney, her ‘second home’, and we were raising donations and awareness for the MMRF.

The following years since, my family has participated in the Tri-State MMRF 5k run. Our team started out small but has grown each year with new faces. This race was big for so many reasons. It gave my mom something to look forward to. It gave her hope. It gave her the control to fight back and most of all, it showed her that there are a ton of people out there fighting alongside her. In May of 2018, my mother passed away after eight years of fighting for her life. Our team, Team Janet Strong, ran in honor of her that June and will be doing the same this year and for the years to follow. It will never be the same without her there but the reason we will all do it each year remains the same.

I’m beyond excited for the opportunity to participate in the Moving Mountains for Multiple Myeloma Mount Washington Hike this year. I’m looking forward to the amazing group of people that will be joining me on this trek and raising donations together as a team. No words can express how grateful I am for the MMRF. I know that I can’t bring my mother back by racing or doing charity events, but I also know that this is going to change other people’s lives by helping support this awesome organization.