One of CURE's followers on Facebook recounted this gem: "Do you think you got breast cancer because of sin?"
BY Staff
PUBLISHED August 02, 2017
A little more than a week ago, we asked CURE’s Facebook users to share the “dumbest thing” anyone had ever said to them about their cancer.

The Facebook conversation drew the attention of Dan Gottlieb, Ph.D., a psychologist who hosts a long-running show on WHYY radio in Philadelphia. He did a segment July 31 in which he helped explain why people say such ridiculous things to those with cancer.

Our evolution, he said, makes us anxious in unfamiliar situations, and we instinctively try to assess whether we, ourselves, are at risk.

“When you say really stupid things, like ‘Everything happens for a reason,’ it’s just to help create distance from you and to help manage your own anxiety,” Gottlieb said. 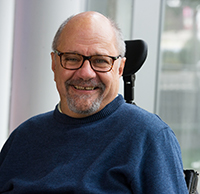 Psychologist Dan Gottlieb offers help in understanding why it can be so hard to talk to someone about their cancer. (Daniel Burke Photography)

So, what should people say when they feel they have to react to the news that someone they care about has cancer?

We have gathered several of the comments below, grouped into broad representative categories.

You Know You Said That Out Loud, Right?


At Least It's The Good Kind

Read All The Comments or Leave One of Your Own