A 'What If' Countdown for Living Flat

Breast cancer survivor and flat-movement activist, Carolyn Choate, offers some rather interesting perspectives on some conventional social norms.
PUBLISHED February 03, 2018
Carolyn Choate recently retired from the TV production industry to write full-time. Diagnosed at 45 with stage 3 estrogen receptor-positive breast cancer in 2003, she underwent two radical mastectomies - in 2003 and 2012 - without reconstruction. Carolyn credits Angela Brodie, Ph.D., and her discovery of the aromatase inhibitor, for saving her life and those of millions of women globally. In the summer of 2017, Carolyn and her older daughter kayaked from New Hampshire to Baltimore in tribute to Dr. Brodie. When not informing others about Dr. Brodie and the "living flat" movement, Carolyn enjoys gardening, cooking and RVing with her family and dog. 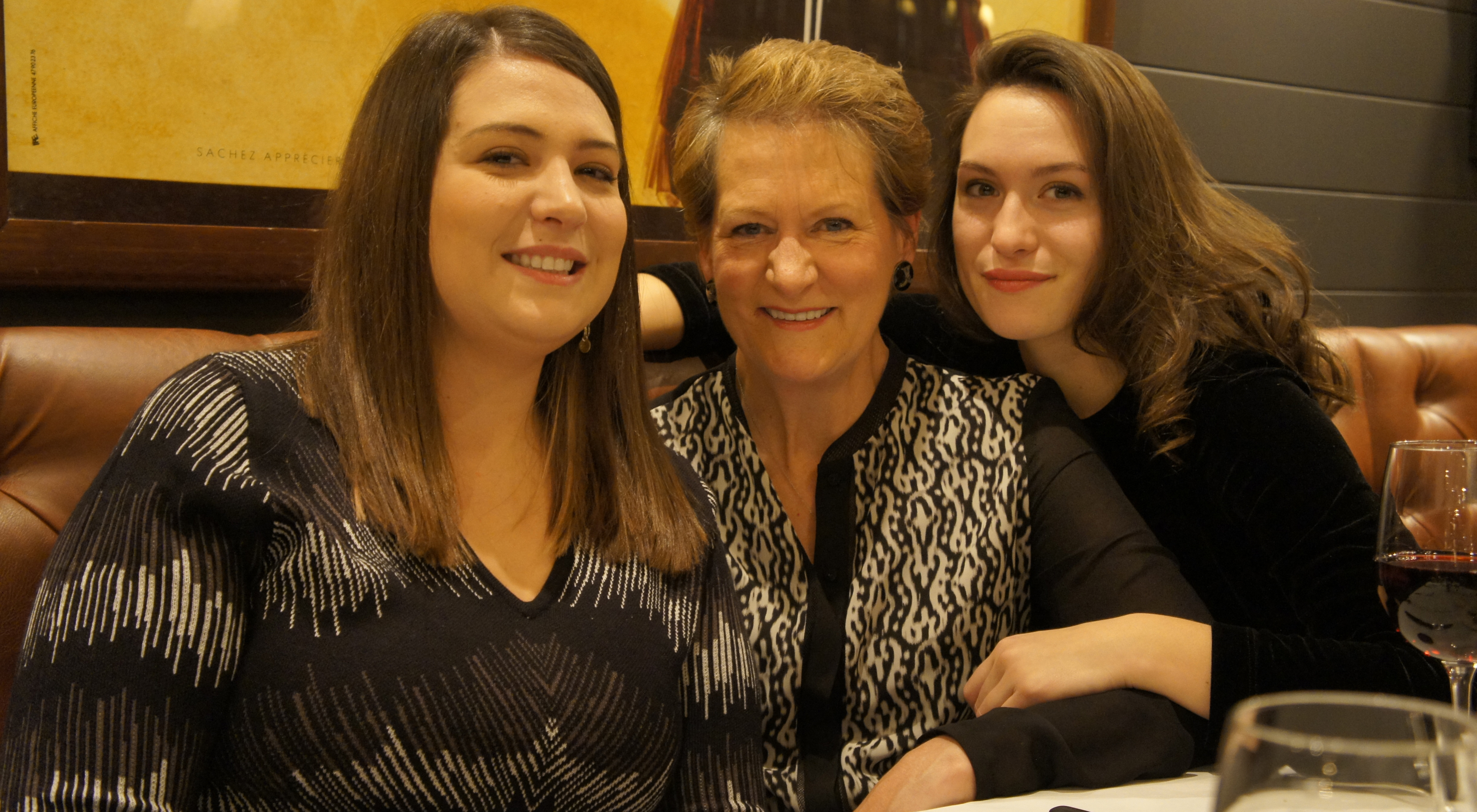 Carolyn with her daughters, Sydney and MacKenzie, in 2014, the year she went flat.
Can I get some things off my chest? Mind you, I'm not physically capable of sacrificing anything more from that part of my anatomy, but you know what I mean. As someone who has embraced the flat life for the last three of my nearly 15 years of various breast cancer survival iterations (i.e. one breast and one prosthetic, no breasts and two prosthetics, no breasts and no prosthetics) I've been humoring myself, of late, with some rather provocative, "what if?"quandaries. A take on Arsenio Hall's, "Things That Make You Go Hmmmm," if you're old enough to remember that forgettable late-night talk show. Here's my top five "what if" countdown:

1. 30-27-36! Hut! As we approach Super Bowl Sunday, let's start with the obvious. What if the best darn cheerleader this side of the Cheerios - of TV's "Glee" fame - was flat and auditioned for an NFL cheerleading squad, anyway? Seriously.

If you're telling me breasts play a role in the often strenuous and exhausting routines performed by, say, the New England Patriots cheerleaders or those of the Philadelphia Eagles, I will penalize you for unsportswoman-like conduct.

While NFL cheerleading organizations do not state physique requirements per se or age limitations beyond the age of 18 (good to know) for applicants, one disenchanted ex-cheerer noted that "big boobs, flat stomach, pretty face and talent" - in that order - are the lingua franca for the job.

Well, Tom, this gives new meaning to the word "deflated." Because in the wake of the #MeToo movement, when female solidarity against male sexual harassment and oppression in all its manifestations, it's hard to tackle what appears to be female-to-female blocking if, in fact, women decide who makes the cut and why.

Living flat, I, for one, would never dream of pulling the ADA card, because as far as I'm concerned, I'm not living with a disability; I'm thriving without one thanks to my dream team of cancer health care providers. And, free to pursue any endeavor I'm physically capable of, embracing the flat movement, like a growing number of women in this country.

So, come on, cheer captains, let's break the big boob barrier! Judging from the inverted Nielsen ratings - which are worse than flat - you could use some additional female fans inspired and uplifted by a new, game-winning strategy.

BTW: 30-27-36 are the fictional, but realistic, measurements of the flat cheerleader I would shoot for if I were 40 years younger.

2. This one's for the home and garden set. What if we flat-lifers mowed the lawn shirtless in summer like a lot of men in the neighborhood do? Sure, there are decency laws about women exposing their breasts but . . . duh! . . . we don't have breasts anymore, remember? And, besides, I get just as hot and sweaty as the guy next door. Just sayin'.

As far as I know, there's no law against exposing your scars. A lot of people wear them proudly: military veterans, my father after a quadruple bypass, Tina Fey - widely recognized as a role model for so many aspiring female comics - who is less known for, but ought to be equally praised for, gracefully bearing the marks from a sick, knife-wielding stranger to her face when she was 5 years old. Without plastic surgery. I get it, sister. All 22 inches of the most precious body art I'll ever wear, symbolic of the battle I waged and won against all odds. Hence, the freedom to live life a little more freely than I would otherwise and more intentionally.

If nothing else, mowing topless could well start a much-needed conversation in the 'hood about those things breast cancer media campaigns don't cover, (no Freudian slip there), like the naked truth about this epidemic disease that will claim an estimated 40,610 women's lives in 2018 according to the American Cancer Society. P.S. Always wear sunscreen and never cut the grass below 3 inches.

3. Now, for the clothes-conscious consumer flattie (or is that "flatty?"), which would be me. What if a fashion design house took the unprecedented step - by all means, correct me if I'm wrong - and created a fabulously chic ready-to-wear line for women without breasts, oui?

Nothing frumpy. No poly. Nary a Peter Pan collar.

I'm not saying it would be easy, but come on! Give my besties something.

If I cloned myself five times and held a focus group, here would be our input:

Let me show some skin! Now that I don't have to worry about wardrobe malfunctions a la Janet Jackson, and there's no Frankenbra - my expression for a prosthetic bra - hanging out to ruin the fashion feng shui, weave some sex appeal into my life, would you? Judging from all the deep v-necks I've seen lately on the red carpet, this is your forte, and I'm placing my order!

Bathing suits. This category is probably the most daunting, only because every woman - flattie or not - has an opinion about what constitutes the best bathing suit for their body shape. Sadly, a lot of women post-breast surgery shy away from wearing them altogether because they feel so self-conscious. When I wore prosthetics, I generally loathed 99.9 percent of the swimwear catering to our demographic, as they reminded me of something my mother wore in the 1950s i.e. matronly in cut and design. That's why I would frequently leave my prosthetics in the drawer and opt for a racer cut maillot in a finer, thinner fabric with the shelf bra removed by my tailor. Voila! No puckering at the bust, making me feel like an underdeveloped 10-year-old wearing a grown woman's bathing suit.

So, do flatty fashionistas a favor, designers, and give us something fun and flattering to wear when we do the breast stroke.

4. Are you sitting down? Number 4 on my "flat-living what if" countdown may come as a shock to some readers or, not so much, to others. I'm talking about the sexual initialism in popular culture today; part of the LGBTQ community. "Q?" you ask. Yes, according to a 2016 article in USA Today, "Queer is anything that exists outside of the dominant narrative," said Cleo Anderson, a 26-year-old intern at GLAAD, a prominent gay rights group.

You know what? When choosing to live flat in 2014, two-years after my second mastectomy, I, too, felt queer, ". . . outside of the dominant narrative." This didn't apply to my sexual preference - I am "S" for straight - but feel queer in another sense of the word: strange, unusual, funny, peculiar. But then I owned my flatness. I embraced it. I realized I valued myself far more because of the decision I made under the circumstances.

So, what if women like us - flat women - mobilized into a socio-political force under the initial "F?" Because if all the talk about the tent being big enough for all of us is true, there's room for an "F" after that "Q."

And, what a force we'd be, fellow flatties, crusading for transparency in post-breast surgery options; promoting flat-awareness across the media spectrum; supporting each other through social media and regional gatherings. Not to mention, collaborating with noteworthy survival organizations and fundraising for breast-cancer related causes we believe in.

5. My final "what if" is the most improbable, by far, but I can still dream, can't I? What if society's general obsession with breasts just took a chill pill? (Hello, Hollywood, anybody home? Knock, knock, Madison Avenue, do you give a fig?) The trickle-down effect would be enormously helpful to a lot of women and particularly girls whose positive self-image too often depends on cup size. And, it would free up an average $3,719 for each of the 290,467 breast augmentations performed in 2016 at a staggering cost of $1,080,246,773 as detailed in a report by the American Society of Plastic Surgeons.

Now, before you bust your bustier, I'm not anti-breast or anti-plastic surgery, and I'm all for freedom of choice. Believe me, no one was sorrier than me to see their 38Ds amputated in the prime of life from stage 3B ER-positive breast cancer and a secondary prophylactic mastectomy nine years later.

But the remorse that turned into bitterness finally gave way to reason, and I learned an invaluable lesson, one I live by to this day and share with my daughters at every opportunity: it's not breasts that make me a woman, it's my mind. Since seized by that epiphany, the flat life just keeps getting sweeter by the day, wardrobe, lawn mowing, cheerleading and activism notwithstanding.
Continue the conversation on CURE’s forum. >>
Talk about this article with other patients, caregivers, and advocates in the Breast cancer CURE discussion group.