How do you educate people about a cancer so rare that just one percent of the cancer population has it?
BY Khevin Barnes
PUBLISHED March 27, 2017
Khevin Barnes is a Male Breast Cancer survivor, magician and speaker. He is currently writing, composing and producing a comedy stage musical about Male Breast Cancer Awareness. He travels wherever he is invited to speak to (and do a little magic for) men and women about breast cancer. www.BreastCancerSpeaker.com www.MaleBreastCancerSurvivor.com 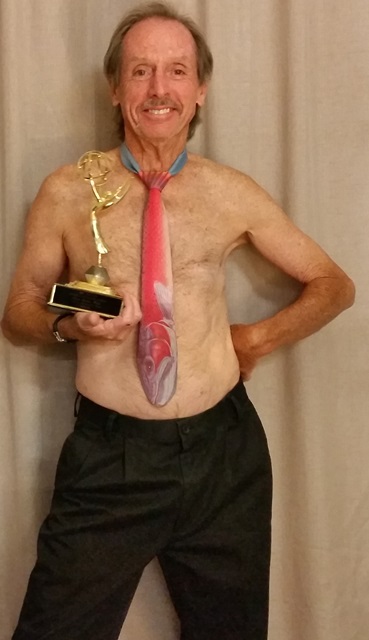 My first musical, written in 2012, took a year and a half to create — complete with 12 songs. Like most things that require a good deal of time and dedication, it’s hard work. Since my breast cancer diagnosis and surgery in 2014 I’ve wondered about the best way to alert and educate men and women about this “orphan disease.” I’ve seen the efforts of groups like the Male Breast Cancer Coalition and others who do a far better job of engaging men and sharing information and connections than I could ever hope to achieve.

But my philosophy about our choice of vocation in life has always been to “do what you love." And so I appreciate and admire those who work hard at sharing the news of our disease and the latest technology to survive it, but as a stage magician and writer for 35 years I’ve stuck with what I know best. I’m still quite willing to visit any cancer group or convention and talk about male breast cancer while sharing some comedy and magic.   But how to reach folks outside the “cancer circle” has always been a deep question for me. Many of us with male breast cancer know what to do, how to check ourselves, what to watch for and where to turn for information pertinent to our health and healing.

But what about those millions upon millions of guys (and plenty of women) who don’t realize that men can even get breast cancer?

My approach, based on what I know how to do, is to simply popularize the message. With years of school shows under my belt, I know that the key to education is to engage your audience. If people are interested for any reason in what you have to offer, they will learn.

I’m astonished by this “drive” that cancer survivors possess, this ability we have to push on with all of the obstacles a life-threatening illness presents. There is an aura of strength that seems to embrace our population, and it’s this very magical sort of quality that I want to capture in my play. I want men and women to know that guys can get breast cancer and we can keep contributing our gifts to our families, our friends and ourselves, despite the cancer that tried to bring us down.

And so my mission to write and produce a Broadway musical about male breast cancer is  a perfectly logical choice for me, though for an unknown writer (outside of a television show that garnered a couple of Emmy Awards almost 25 years ago), it’s a stretch. It’s a very big dream that not surprisingly has a lot of unknowns attached to it and a limited amount of time to grow.

But cancer has a way of fast-forwarding our future, and to make changes to everything we have planned. And so here I am, a 67-year-old unknown playwright who can’t read music, with male breast cancer, writing a full-length musical play. But when I close my eyes I can hear a full orchestra and each individual instrument playing and the singers and their harmonies behind it. I don’t think of this as being anything extraordinary, but it certainly makes the job of writing a show a little easier. Dreams and ambitions don’t always make sense, at least on an intellectual level. Our dreams are often counterintuitive and difficult to illuminate, but I believe that is precisely their purpose; to stretch us beyond our perceived capacity.

When you think of it, male breast cancer is just quirky enough to make it a captivating subject for musical theater. Great plays have been written about phantoms, cats, hunchbacks, fairy tales, mermaids, the book of Mormon, kinky boots… The list goes on. I believe that male breast cancer awareness will benefit greatly through an imaginative, unusual, reverent, humorous and authentic evening of musical comedy.

So far the response has been remarkable, with men sharing their stories and anecdotes to be used as script ideas and folks contributing financially to pay for studio time with vocalists to record the early demo tracks.

My hope is that one of the larger cancer organizations will recognize the value of the production and sponsor it in a nationwide tour. Ah, dreams!

What would cancer survivors do without them?