Put on a Happy Face

Hospital laughter programs can generate physical and emotional benefits for patients with cancer.
BY Jeannette Moninger
PUBLISHED February 16, 2015
Robbie Robinson was receiving chemotherapy for non-Hodgkin lymphoma at Cancer Treatment Centers of America (CTCA) in Zion, Ill., when he heard about the center’s laughter therapy program. “What’s so funny about cancer?” Robinson remembers thinking. But after spending a session yukking it up with others being treated for cancer and their loved ones, Robinson was hooked on a humor high.

“I discovered that it’s OK to have fun, even when you’re dealing with something as awful as cancer,” Robinson says. “Laughter changes your whole perspective on how you choose to go about living—for the better.” It might seem counterintuitive, but a healthy dose of the giggles may be just what the doctor ordered when you or a loved one are confronting a life-altering disease. 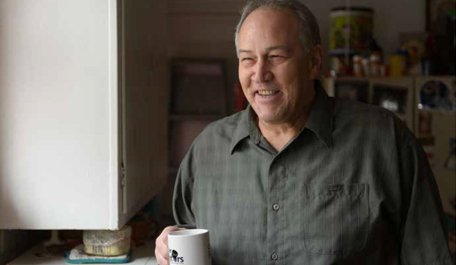 Robbie Robinson joined a hospital laughter program while receiving chemotherapy, and discovered it was “OK to have fun.” Photo by Ken Carl.

As early as the 13th century, surgeons used humor as a crude, anesthetic-like distraction for patients enduring agonizing procedures. Laughter or humor therapy really started gaining credibility in 1979, when Norman Cousins touted the analgesic properties of laughter in his book Anatomy of an Illness. Cousins, who suffered from a rare form of spinal arthritis, found that a 10-minute dose of jocularity brought him two hours of pain relief. Research suggests that Cousins was onto something.

Just like exercise, the physical act of laughing releases endorphins, feel-good hormones that function as the body’s natural painkillers and are also known to cause a “runner’s high.” Findings from a 2011 study conducted at the University of Oxford in England found that watching 15 minutes of a comedy program with others increases one’s pain threshold by as much as 10 percent. At the same time, these endorphins decrease levels of cortisol, the hormone that floods the body during periods of chronic stress.

“We know that chronic stress compromises the immune system, tenses muscles, slows digestion and elevates blood pressure. Laughing counteracts these negative effects,” explains psychologist Steve Wilson, founder of the World Laughter Tour, an organization that certifies laughter club leaders, including some of the ones at CTCA. Wilson was 20 years old when he lost his mother to ovarian cancer. “I learned you should never postpone joy,” he says.

Humor researchers at Loma Linda University in California have made other interesting discoveries. It seems that simply anticipating a funny occurrence, like waiting for a joke’s punchline, is enough to open endorphin floodgates. And for those suffering from memory problems brought on by cancer treatments, findings indicate that laughter may boost short-term memory by as much as 20 percent. A small 2010 study in the American Journal of Cardiology found that laughter’s positive effects, including lowering blood pressure, can last up to 24 hours.

TAPPING INTO THE LIGHTER SIDE OF LIFE

A growing number of medical centers offer some form of laughter or humor therapy, although the methods of mirth vary. At North Kansas City Hospital in Missouri, patients can watch funny movies or choose from a selection of joke books. Duke Medicine offers a Laugh Mobile, a rolling cart from which adult patients in oncology wards can check out humorous books and silly items such as whoopee cushions and rubber chickens. And the Big Apple Circus Clown Care Program sends specially trained clowns to 16 children’s hospitals nationwide to help put smiles on the faces of ill children. Michael Christenson created the program after losing his brother to cancer.

At Montefiore-Einstein Center for Cancer Care in Bronx, N.Y., patients and their loved ones swap jokes and humorous stories in a monthly support program called Strength Through Laughter. While the meetings have an educational component—covering topics like pain management, improved sleep or stress relief—people mostly come for the laughs.

“Joking around gives people a mini-vacation from the gravity of their situation. It’s a mental pick-me-up,” says Gloria Nelson, a senior oncology social worker who started the program in 2008. Nelson incorporates a fun theme into each meeting, such as a Halloween costume party or a summertime barbecue. “We try to focus on the positive, good things happening in people’s lives,” she says.

Aida Vega, of Bronx, N.Y., compares the Strength Through Laughter sessions to receiving hugs from friends. “People with cancer deserve to have a good time, too,” says the 77-year-old breast cancer survivor. “I might start a session feeling a little down, but I always leave with a smile.” Despite the positive powers of laughter, Nelson acknowledges that her sessions aren’t right for everyone. “People who are angry or struggling to accept their situations probably need a different type of support group or individual counseling.”

With Laughter Club, the weekly CTCA program that tickled Robinson’s funny bone, mental health specialists or social workers guide a series of amusing exercises. For example, participants start by placing their fingertips on their cheekbones while making “ha ha” sounds, their chests while making “hee hee” sounds, and their bellies while making “ho ho” sounds until they’re vibrating from head to toe with laughter. “It’s virtually impossible to not be truly laughing when you finish,” says Katherine Puckett, CTCA’s national director of mind-body medicine.

Puckett admits she worried about offending people when she started CTCA’s therapeutic humor program more than a decade ago. “By its nature, cancer is not a lighthearted topic. It’s serious business,” she acknowledges. What she discovered, though, is that a little bit of levity during tough times encourages people to be more kind to themselves and to others. It also helps patients and their loved ones to gradually become more accepting of their circumstances. “People say, ‘I haven’t laughed like that in months. I had forgotten how good it feels,’” she says. “The sessions are a reminder to live it up and enjoy yourself.”

HUMOR ON THE HOME FRONT

Humor programs are available in less clinical settings, too. Laughter yoga classes—which, like Puckett’s clubs at CTCA, use laughter sounds and vocalizations, along with yogic breathing techniques, to stimulate real laughter—are held in communities around the country, in some cases for free.

The movement’s motto is “laugh for no reason.” “You don’t need to get the joke, feel good, or even have a reason to laugh!” explains the website for the American School of Laughter Yoga (ASLY; laughteryogaamerica.com).

Patients, survivors or caregivers may be able to find such classes in their areas by visiting the organization’s site and using the search function. And anyone, anywhere, can create a new community laughter club, described by ASLY as “social clubs run by volunteers where like-minded people get together just to laugh as a form of exercise.”

Don’t feel like joining an organized program? Look for a giggle on television or YouTube, in comedy clubs or comic strips, in the company of funny friends, children or pets, or on outings to fun places like bowling alleys or karaoke nights. Or, turn the tables and become the joke teller. Plenty of jokes can be found online at LaughFactory.com or Comedy Central, or try recounting embarrassing moments, which can be both funny and liberating.