Laura Yeager talks about her journey with breast cancer, from the fearful thoughts to the free food at chemotherapy.
BY Laura Yeager
PUBLISHED October 26, 2016 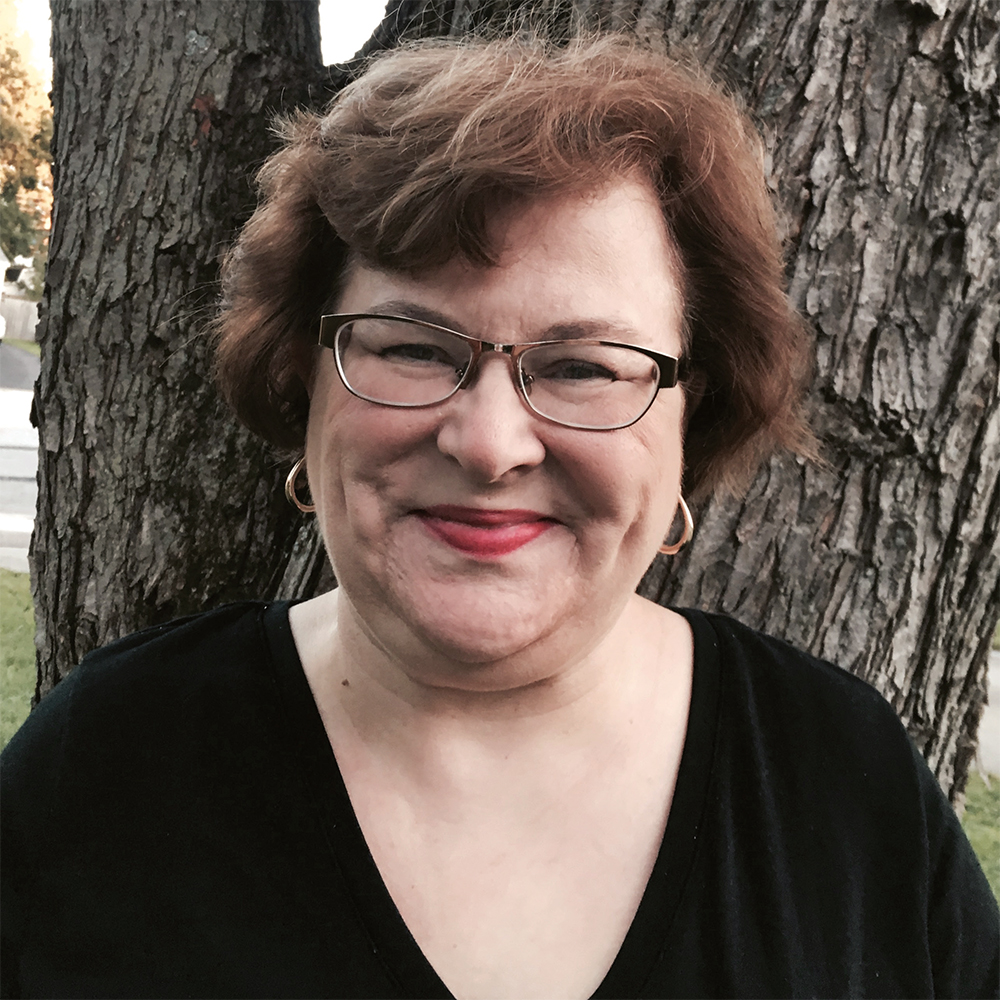 When I was in graduate school, a close friend gave me all of her old clothes that she was wearing when her boyfriend beat her up years before. She just couldn’t handle the memories. She wanted the garments out of her sight. They were nice clothes. I remember she gave me a red sweater dress with a big parakeet on it. I wore it for her, without angst.

Recently my basset hound was chewing the sun hat I wore to Florida when I was bald from the chemo. At first, I grabbed the hat from him; then, on second thought, I gave it back. Let him chew it up, I thought. Good riddance.

My breast cancer was a two-year experience composed of four procedures: diagnosis, chemo, mastectomy and radiation. I have vivid memories associated with these treatments. I focused on the healing procedures, not the actual sickness, and to be even more specific, I remember the waiting rooms, all four of them.

The place where I waited to receive all of my diagnostic procedures (mammogram, ultrasound, MRI, biopsy) was decorated for “ladies.” The style was Victorian — all peony-flowered slipcovers and checkered ribbons adorning bright pink and soft orange pillows. The interior decorator had taken the female aspect of these breast procedures to heart. Not only were there soft, comfortable chairs, there was a couch, where a patient could stretch out and shut her eyes. Of course, a television emitted a happy talk show, usually Rachel Ray.

First came my mammogram. It was routine in nature, a yearly check-up. The technician took the films, developed them, inspected each one and told me she’d made a little mistake and needed to take some again. Of course, she’d seen the lump, but she didn’t tell me this.

The next day, I got a phone call, and they told me they had spotted something and that I needed to come in for an ultrasound.

The tech slathered on the cool ultrasound gel and pressed the ultrasound wand hard into my breast. I peeked at the screen. There it was — the evil bump. This procedure provided the view that they needed to inform me that they would have to do an MRI.

The first time around, I thought I’d die in the MRI machine. When they pulled me out, I was in hysterics.

I’d have to have a second MRI done in a roomier tube. For this one, I took three Lorazepam tablets. The drugs put me in a sleepy, fantastic mood. They could have wedged me into anything, a sewer pipe, and I wouldn’t have cared.

After this procedure, they knew that a biopsy was necessary. All I remember about that is that it involved a needle and it hurt.

And then this: “Yes, Mrs. Yeager, you do have breast cancer.”

I panicked. I had a 6-year-old son. What if I died? In the chemotherapy waiting room stood a white, plastic Christmas tree. The mostly female staff decorated the tree for every holiday. On St. Patty’s Day, the tree was covered with green shamrocks and little leprechauns. On Valentine’s Day, red hearts and cupids adorned the tree. It was for people who might not make it to Christmas. My cancer surgeon, who staged my cancer at 2, told me that I was not going to die from this illness. She assured me she could get it all. I wondered if she was breaking a doctor rule. Could she assure me that I wouldn’t die?

I was diagnosed in October of 2011. This means that the first time I entered the chemo waiting room, the tree was decorated for Halloween. Ghosts, pumpkins and witch hats. I went to the receptionist’s window and identified myself. The nice lady made some notes and told me to have a seat.

I was the youngest in the room. At 48, I knew I had indulged in too much butter and not exercised enough. I guess I wasn’t surprised by the cancer. Most of the patients were in their 70s and 80s. People looked at me with sadness in their eyes. I waited patiently to go into the treatment room with Stephen, my husband of 14 years.

Backstory: Ester, my oncologist, had decided that the first thing that should be done was chemotherapy, not the mastectomy, which was what I thought they’d do first. Ester watched birds in South America when she wasn’t curing cancer. She was upbeat, but I would learn that she could also put her arms around me when it got tough and cry with me.

Oh God, the lump was malignant, and now a nurse was calling my name, ushering me into a big room filled with huge, green chemo chairs on which big, fluffy white pillows lay. I was told that each chemo session would take about six hours. I guessed they wanted me to be as comfortable as possible.

Once inside, they weighed me and took my temperature, my pulse and my blood pressure. A male nurse executed these basic duties. He was the only man in the chemo room. He wore a blue pair of scrubs and was tall and good looking. For the next eight weeks, he’d record my weight going up.

One good (and bad) thing about the chemo treatment room was the free food. All you had to do was walk to the little fridge while pulling your chemotherapy drugs along. The meds were in a clear bag that hung from a pole on wheels. Inside the fridge were sandwiches, small cans of soda pop. On the counter sat donuts under a glass dome. Another thing that was easy to obtain was any kind of tranquilizer you wanted. If you were weepy one day, they’d give you a drug to ease your malaise. I was surprised at how quickly they handed out these pills. A chemo nurse wanted her patients’ procedures to go as smoothly as possible.

My best friend, Jan, came to visit me and sit with me during one of my chemo sessions. By this time, I was bald. She was beautiful, as always. She’d managed to stay the weight she was in college (60 pounds less than I). She had a long mane of highlighted blond hair, touched up just perfectly with the right amount of lowlights. Her nails were manicured, and her makeup was applied perfectly. She looked like she was about to step into a TV studio to film a soap opera. Jan sat across from me and patted my hand while I wept. The chemo drugs dripped into me. I was offended that she couldn’t drum up some sympathy tears. She held it together very well. I was struck by the distance between us. Soon, chemo was finished. My fingernails were falling off. Of course, my hair was long gone.

The waiting room for my plastic surgery (which would occur immediately following my mastectomy) was really decked out. The décor was modern. The chairs and couches were covered in material with a geometric pattern. The most prominent thing in the room was a television that played a DVD describing all types of plastic surgery. Nose jobs, tummy tucks, breast enhancements, all for the Beautiful People. The doctors could do anything.

Anything but get my surgery right. It took two operations to get the two breasts (filled with implants) close to the same size.

I remember waking up in a hospital bed after the first surgery. It was around midnight. My husband was standing by the bed. There was a tray of food hovering over my stomach, sitting on a food cart. God, I was hungry. I hadn’t eaten in two days. My husband fed me a turkey sandwich, bite by bite. Chewing was difficult. My throat was dry. It took about an hour to eat the most delicious sandwich I had ever consumed. When the food was gone, Steve said, “I’ve got to go home. I’m exhausted.” He’d been there since 7 a.m.

I felt my breasts. There was a line, an incision that ran across both of them. One was a C cup, and one was a B cup. I was disappointed, to say the least.

Breast implants weren’t for girls like me. I associated implants with the strippers on Robin Byrd, a sexy show that appeared in the 1980s on New York cable television. Robin invited all of the strippers in Manhattan and surrounding areas to come on and strip on her TV show. Those girls had breasts as big as watermelons.

Stephen came back the next day and helped me shower. Your husband hasn’t really done anything for you until he’s cleaned your ass.

The second surgery, which they called a revision surgery, was an outpatient experience. The surgeon got the breasts a little more equal in size, but not really. I guessed I couldn’t expect perfection. If the new breasts had matched, I would have considered having nipples tattooed on them. As they were then, why bother?

In the radiation waiting room, Ellen was always dancing. This is because my radiation treatments were scheduled at 5, and that’s when Ellen DeGeneres came on in Akron. I checked into radiation by sliding my identification card in a scanner, going back to a dressing room and removing the clothes from the top half of my body. Then, I’d enter a smaller, private waiting room and watch the talk show host boogie. It was infuriating. What was she so jazzed about? During radiation, I had to lie very still for several minutes. I got good at it. The skin on my right breast turned redder and redder — the worst sunburn imaginable.

Close to the end of my treatments, a technician, a supposedly professional one, quipped, “Now you’re nice and crispy.” I was offended, to say the least.

A slight upside of radiation: There was free valet parking.

Radiation lasted for six weeks. It was every day. It did not break me.

I am cured. At five years since the cancer was diagnosed, I’ll be able to breathe a little easier. I’ll have more of a chance of staying alive longer. My son is now 12. I’m starting to feel safer.

Yesterday, I found the Florida sunhat. It had made its way under the bed. The straw sombrero had big holes in it. My dog had chewed it up good.

I went to the garage and stuffed it in a trash can.

I don’t recognize the bald, fat woman I see in photographs from my cancer days. It’s a good thing we don’t remember everything.
Be the first to discuss this article on CURE's forum. >>
Talk about this article with other patients, caregivers, and advocates in the Breast Cancer CURE discussion group.