A tiny fraction of melanoma is inherited.
BY Leah K. Lawrence
PUBLISHED December 09, 2016 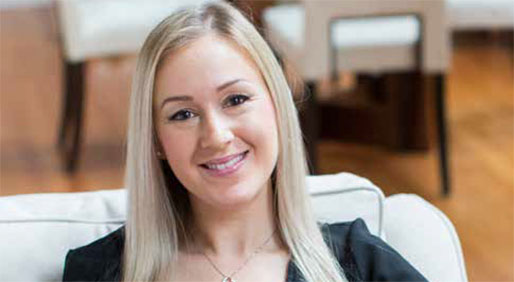 ERICA BRITTON has a genetic mutation associated with risk for both breast cancer and melanoma. - PHOTO BY RACHEL FESKO
WHEN ERICA BRITTON, 31, was diagnosed with melanoma at the age of 23, her family history of ovarian cancer prompted her physicians to test her for inherited mutations in the BRCA1 and BRCA2 genes. Inherited mutations in these genes, or germline mutations, are most commonly associated with increased risk for breast cancer and ovarian cancer; however, some research has also linked the mutations to an increased risk for certain skin cancers, including melanoma.

Melanoma is a form of skin cancer in which cancer cells form in melanocytes, or the cells that color the skin, such as moles. In 2016, it is estimated that more than 76,000 new cases of melanoma were diagnosed. The majority of cases are diagnosed at an early stage, and these patients have a five-year survival rate of greater than 90 percent. Although melanoma starts in the skin, it can spread, or metastasize, to other parts of the body. Patients diagnosed with metastatic melanoma have a five-year survival rate of about 18 percent.

About 8 percent of people diagnosed with melanoma have a first-degree relative who has also been diagnosed. Even fewer — about 1 to 2 percent — have two or more relatives with melanoma. These patients may have familial melanoma.

“Cases of inherited melanoma are extremely rare,” says Lynn M. Schuchter, M.D., chief of the division of hematology/ oncology and C. Willard Robinson Professor of Hematology-Oncology at Penn Medicine. “The vast majority of melanoma is sporadic.”

Everyone is at some risk for sporadic (non-inherited, or random) melanoma, but there are certain factors that increase the likelihood of getting the disease. People with fair skin that freckles or burns easily, people with blue, green or light-colored eyes, and those with red or blond hair are all at increased risk. In addition, long periods of exposure to natural sunlight or artificial ultraviolet (UV) radiation, like from a tanning bed, can increase risk. Finally, having several large or many small moles, or having a family history of unusual moles, can increase the risk for melanoma.

All of these risk factors are relevant in familial melanoma, but most familial or hereditary cancers are caused by certain germline (inherited) mutations.

“There is an increased risk for developing melanoma associated with gene mutations passed from generation to generation, but there is also risk associated with other things shared by families,” explains Pauline Funchain, M.D., a medical oncologist at Cleveland Clinic, in Ohio. “These shared things include other predisposing factors for melanoma like blond or red hair, fair skin, blue or green eyes, or shared activities like boating or other outdoor activities.” 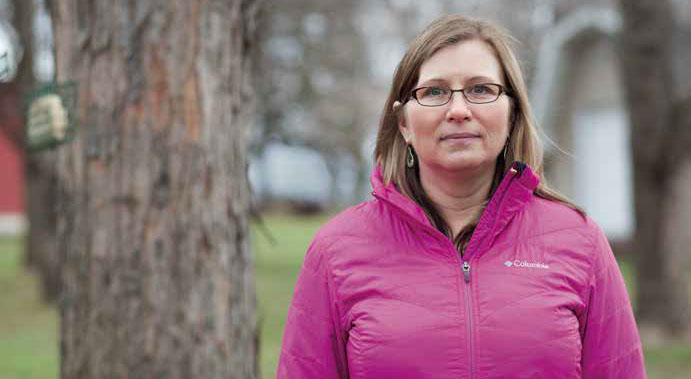 “I am all about sunscreen and UPF clothing and hats. I don’t live my life in fear, but I am very careful about being outside.” — ROBYN COOK - Photo by PHOTO BY HEIDI SHUB
Robyn Cook, 48, and members of her family, fit many of these characteristics to a tee. Of Norwegian decent, Cook has blond hair, green eyes and fair skin, and can remember spending a lot of her childhood at a summer cabin being “fried” by the sun. Although she lives in Minnesota, she was still frequently exposed to UV radiation while she worked at a tanning salon in college. While on a vacation in Mexico in 2009, Cook’s mother questioned the suspicious look of a mole on the right side of her back. Her primary care doctor excised the mole and subsequent biopsy tests revealed that it was a stage 1 melanoma about 0.61 mm deep.

“When I was diagnosed, I had never really heard of melanoma. I didn’t know what it was,” says Cook. “My doctor told me that it was serious, but that I was OK after this first diagnosis and just had to get regular full body checks with a dermatologist.”

Cook says she drastically changed her sun behavior and that of her family, including her teenage daughter. “I am all about sunscreen and UPF clothing and hats,” Cook says. Designed to protect against the sun, such clothing is made of fabrics that absorb or reflect UV radiation, and is rated with an Ultraviolet Protection Factor (UPF) value. Clothing with a rating of UPF 40 or greater blocks 97.5 percent of UV radiation or more. “I don’t live my life in fear," Cook continues, "but I am very careful about being outside.”

Despite that, in September 2012, Cook noticed a lump in her left breast and immediately thought that she might have breast cancer. After undergoing a mammogram, ultrasound and needle biopsy, her doctors told her that she again had melanoma. However, this time, a scan of her whole body showed that the disease was stage 4 and had spread to other parts of her body. A second melanoma at a new site is called a second primary.

“When a patient has multiple primary melanomas, we often begin to wonder about the likelihood that patient has an inherited risk for melanoma,” Schuchter says. “We are also suspicious in patients with a young age of onset, those with family members with melanoma, or patients with atypical or dysplastic nevi.”

Other than these risk factors, familial melanoma presents, is staged and is treated in the same way as sporadic melanoma.

“As far as we know now, familial melanoma does not alter prognosis — just the frequency with which someone may be diagnosed,” Schuchter says.

Even when clinicians are suspicious that a melanoma is familial, they do not always conduct tests to confirm whether a patient has a genetic predisposition, according to Schuchter and Jeffrey S. Weber, M.D., Ph.D., a specialist in melanoma management and cancer immunotherapy and deputy director of the Perlmutter Cancer Center at NYU Langone Medical Center.

“If someone has already had multiple melanomas and they are already undergoing intense melanoma screening or treatment, how does knowing that they have a genetic mutation help?” Weber asks. “Knowing does not change how melanoma is treated and it does not change the advice that is given to prevent future skin cancers.” Anyone diagnosed with melanoma should already be advised to practice sun-safe behaviors and to encourage these behaviors in members of their families.

However, Funchain encourages genetic testing in these patients.

“Although inherited melanoma is not typically very different from sporadic melanoma, the more important thing about identifying inherited melanoma is the ability to look for genes that may increase the risk for other cancers,” Funchain says. “By knowing what specific mutation a patient has, we have the opportunity to narrow down and more effectively address any risk for other cancers, and, potentially, save lives.”

For two decades, two genes have been linked to familial melanoma: CDKN2A and CDK4. Factors associated with an increased likelihood of having a CDKN2A mutation include an increased number of people with melanoma within a family, melanoma diagnosis at an early age and family members with multiple primary melanomas or pancreatic cancer. A study looked for these four features in 385 families in Australia, North America and Europe that included three or more people with melanoma. Researchers found that 39 percent of these families had CDKN2A mutations.

No drugs that target these mutations have been approved for the treatment of melanoma, but Ibrance (palbociclib) — which has been approved to target these genomic glitches in advanced breast cancer — is being tested in clinical trials.

After receiving her second primary melanoma diagnosis in 2012, Cook dug into the medical history of her family, including her deceased father. She found that, although it did not cause his death, her father had been diagnosed with melanoma earlier in his life.

To treat her stage 4 melanoma, Cook underwent a series of surgeries to remove metastases, began treatment with an immunotherapy drug called Yervoy (ipilimumab) and underwent Gamma Knife radiation. She also underwent testing for the CDKN2A mutation, but the tests were negative. During her recovery, her younger brother, a typically sun-safe athlete who lived in Arizona for much of his life, visited her to help. While visiting, he revealed to her that he felt a lump in his armpit, and she encouraged him to have it immediately checked out.

“He saw several physicians who said he was likely just sick and told him not to worry about it,” Cook says. “By a fourth visit to a surgical oncologist in April 2014, my brother was diagnosed with stage 4 melanoma.”

Yervoy, which worked to shrink Cook’s tumors, did not work for her brother, and he died from melanoma three days short of his 45th birthday.

Despite the fact that Cook was negative for the CDKN2A mutation, she may still have a germline mutation that makes her more susceptible to melanoma, according to Funchain. Alterations in CDKN2A and CDK4 account for only a small percentage of familial melanomas, and other genes involved are yet to be discovered.

“At the time when Cook was tested, the first papers on screening for CDKN2A had only just been published,” Funchain says. Since then, research has revealed a multitude of other genes that may increase the risk for familial melanoma, and new gene sequencing technology has made it cheaper and easier to test for multiple genetic mutations at the same time.

In Britton’s case, her diagnosis of melanoma and her family history of ovarian cancer led her physicians to suspect that she might have mutations in the BRCA genes.

One small study followed a group of 2,729 women with BRCA1 or BRCA2 mutations for an average of five years and found that women with the BRCA2 mutation had an 83 percent increased risk for developing skin cancer compared with women with a BRCA1 mutation.

Although Britton’s melanoma diagnosis was eventually downgraded to dysplastic nevus, her genetic testing showed that she was indeed positive for BRCA1, and she underwent a prophylactic bilateral mastectomy to lower her chances of getting breast cancer later in life. Her sister underwent genetic testing for BRCA mutations, as well.

Research is slowly emerging about other gene mutations associated with familial melanoma, including BAP1, MITF, POT1 and others. Each of these genes may also be associated with increased risk for other cancers. For example, mutated BAP1 has also been linked with a higher risk for mesothelioma and ocular melanoma.

According to Funchain, the most important thing that anyone can do if they may be predisposed to familial melanoma is connect with a genetic specialist or genetic counselor.

“Hereditary genetics is not a topic that many practitioners are fully versed in, so it is an important step to get hooked up with a genetic counselor,” Funchain says. “If you see someone who knows genetics really well, they can tell the patient about what other cancers might be involved with each mutation and can send them to the right people to be screened.”

Patients can also turn to organizations such as FORCE — Facing Our Risk of Cancer Empowered — a national non-profit organization that works to create awareness around and advocate for research to support people dealing with hereditary breast, ovarian and related cancers.

For Britton, knowledge about her BRCA mutation was able to inform her sister’s decision to get screened, and, if she has children in the future, will inform theirs as well. She also keeps a close watch on her skin and continues her regular visits to a dermatologist.

Cook has now gone almost three years without evidence of disease and is living a full and fulfilling life, she says. Although her screening for the CDKN2A mutation was negative, her experience has factored into her daughter’s decision-making when it comes to sun safety and skin cancer prevention.

Overall, for melanoma prevention, the advice is the same for someone with or without familial melanoma, according to Weber.

“Stay the heck out of the sun and see a dermatologist every six months,” he says.
Be the first to discuss this article on CURE's forum. >>
Talk about this article with other patients, caregivers, and advocates in the Skin Cancer CURE discussion group.