Heal: The Vital Role of Dogs in the Search for Cancer Cures

Arlene Weintraub's book explores a topic in cancer not often discussed: the drug development process and its effects on both people and dogs.
BY Beth Fand Incollingo
PUBLISHED March 31, 2016 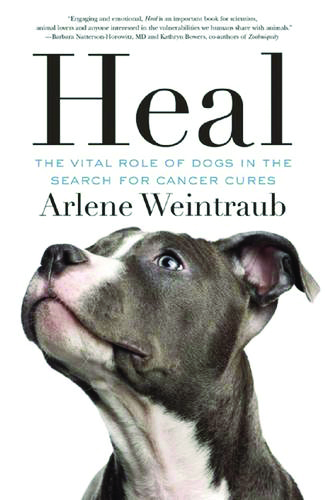 What do dogs have to do with cancer research? “Heal,” which chronicles one woman’s research journey across the United States, explains that dogs get some of the same cancers as people, and, in veterinary clinical trials, have been among the first to try new types of medications that were eventually approved for both dogs and humans. Author Arlene Weintraub — a frequent contributor to CURE magazine and a lifelong dog owner — does more than share facts. She tells the stories of special dogs, their owners, the researchers who entered their lives — and her own loss of a loved one to cancer.

With the FDA now willing to consider data from clinical trials in pet dogs as it reviews cancer drugs for human use, these pets and the owners who speak for them provide vital information about efficacy, side effects and dosing. In fact, some of today’s most promising cancer treatment techniques are being developed with help from man’s best friend, including T cell immunotherapies and engineered viruses, Weintraub explains. Dogs are also contributing to cancer research through their uncanny ability to sniff out human cancers, and scientists are working on diagnostic devices that can mimic this ability.

Writing the book brought Weintraub hope as she grieved the loss of her sister to gastric cancer. “I had been writing about science for a long time, but when my sister got sick and died, I lost all hope that anything that did well in trials was going to make much of a difference,” she says. “But as I started to research this and saw what was being learned, it was very inspiring. There’s a lot of really interesting genomic work going on that can ultimately help both dogs and people.”

What will people with cancer and their loved ones get out of the book? A glimpse at a fascinating and not-often-discussed part of the drug-development process, and a message: “Clinical trials are really important for helping both dogs and people,” Weintraub says. “I really encourage readers to take the opportunity seriously if they’re offered it for themselves, a family member or a dog, because we need the participation to gain the knowledge.”
Be the first to discuss this article on CURE's forum. >>
Talk about this article with other patients, caregivers, and advocates in the General Discussions CURE discussion group.