Programs that help improve physical appearance during cancer treatment may do even more to lift patients’ spirits.
BY JEANNETTE MONINGER
PUBLISHED October 25, 2017 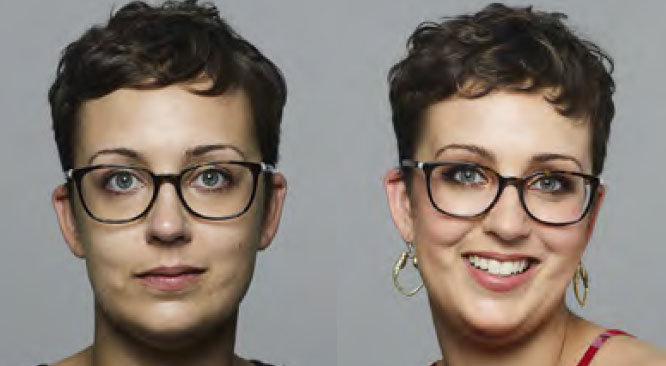 “I was facing a double mastectomy and chemotherapy to treat stage 2 breast cancer. How I looked at the time wasn’t a priority,” says Cormier, who was diagnosed in 2016 at age 27. But the more she heard about the program, which teaches skin care, makeup and wig tips to people with cancer, the more intrigued she became.

Finally, she decided to see what the fuss was about. Cormier attended a two-hour workshop at her cancer center alongside other women with various types and stages of cancer. “I was so wrong about the program,” admits Cormier.

“This isn’t about makeup and vanity. It’s about restoring a sense of normalcy and routine to a life that is far from normal. Sure, I learned how to draw in my eyebrows so I look less sad and tired. But more importantly, I learned that I’m not the only one who’s upset about not having eyebrows anymore!”

Cormier went home with a goody bag full of donated cosmetic products and a renewed sense of optimism.

“I actually felt better about myself for the first time since learning that I was going to lose my breasts,” she says. “It gave me the kick in the butt I needed to put forth a better attitude and effort.”


Look Good Feel Better is one of several nonprofit programs that taps into the power of tending to personal appearance to bolster the spirits of people with cancer. Currently in its 28th year, Look Good Feel Better is a collaborative effort among the Personal Care Products Council, the American Cancer Society and the Professional Beauty Association. Licensed beauty professionals, including hair stylists, makeup artists, aestheticians and nail technicians, volunteer their time to teach participants about skin and nail care, as well as how to use cosmetics, wigs, turbans and accessories.

“We recognize that living with cancer can be overwhelming,” says Louanne Roark, executive director of the Look Good Feel Better Foundation of the Personal Care Products Council. “Our goal is to help people with cancer feel more confident about putting themselves out there, whether they’re going to work, taking their kids to school, grocery shopping or just looking in a mirror at home.”

The nonprofit organization hosts workshops in more than 2,000 hospitals, cancer centers and community centers nationwide, as well as in 25 countries. There are also online tutorials, programs for teens, information for men and a smartphone app that lets people upload photos to see what they’d look like wearing different types of makeup and wig styles. 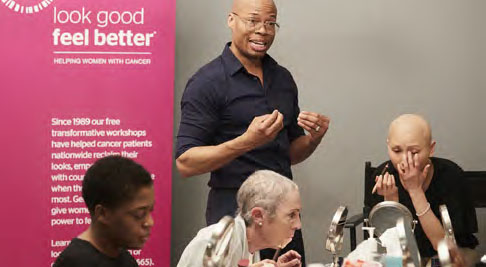 Makeup artist RUDY MILES coaches SHELLY RERRIE, LINDA PIERCE and LINDA LEE in makeup application. - EREZ SABAG / LOOK GOOD FEEL BETTER
For many people, appearance and self-esteem are deeply intertwined. A Harris Interactive survey found that almost all women — regardless of whether they had cancer — said their looks affect how they feel about themselves. In the same survey, up to a third of women with cancer said that changes to their appearance brought on by cancer treatments had a negative effect on their relationships with spouses, children and friends. Some confessed to staying home because they didn’t want to be seen in public. A 2007 analysis of body image in cancer survivors found that many men, too, experience dissatisfaction with their body image after treatment for cancer, and that poor body image seemed to negatively affect mental health in these patients.

Losing one’s hair, including eyelashes and eyebrows, is only one unfortunate side effect of cancer treatments. The harsh drugs also do a number on skin.

“Chemotherapy and radiation dry out skin, cause dark skin patches called hyperpigmentation and can make your skin break out with acne and hives. These are the types of physical changes that nobody warns you about,” says Caitlin Kiernan, author of Pretty Sick: The Beauty Guide for Women With Cancer. “You have to swap in new skin care products and makeup that won’t irritate overly sensitive skin.”

Kiernan, a beauty editor, wrote her book after undergoing treatment for breast cancer. “Yes, I was concerned about my health,” she says. “But I also wanted to look like my normal self, especially because I was working in the beauty industry.” One woman Kiernan interviewed for her book said that maintaining a normal appearance was important for the sake of her young children. Regardless of the reason, Kiernan asserts, beauty treatments are an adjunct therapy to cancer treatments.

“When you look good, you do feel better,” she says. Celebrity makeup artist Renata Helfman, of Los Angeles, appreciates the importance of putting on a brave, attractive face while waging this very personal war.

Helfman used to take her grandmother to get treatments for squamous cell carcinoma. “As soon as I pulled into the cancer center, Grandma would whip out her lipstick, pull down the car visor and peer into the mirror. She wouldn’t leave the car until she had her face on,” recalls Helfman, who at first didn’t understand the significance of those actions. “I thought, ‘Who is she trying to impress? She’s getting cancer treatment!’ I understand now that it was all about getting through the cancer journey with as much dignity as possible.”

Inspired by this memory and a desire to help other people with cancer look and feel their best, Helfman founded Lipstick Angels in 2012. Licensed, professional makeup artists and aestheticians provide spa-like services a couple of times a week to patients getting infusion treatments at select cancer centers in California and New York.

“It was a tremendous kindness, to be pampered and provided human touch in a non-medical capacity,” one male client, who only wanted to be identified as Kevin, said. “After 9-and-a-half months of chemo every week, things like this make such a huge impact.”

Caregivers also can receive the spa services. “We’ve found that patients like being able to do something nice for the person who is there looking after them,” says Helfman. Participants also receive complimentary product samples. “We only use all-natural, chemical-free beauty products to reduce patients’ exposure to potentially dangerous chemicals and ensure that skin is cared for responsibly,” says Helfman.

A FASHIONABLE WAY TO FIGHT CANCER


Lipstick Angel representatives are used to hearing a polite “no, thank you” when they approach a patient about beauty services for the first time. This reaction doesn’t surprise Alison Snow, Ph.D., a social worker and assistant director of cancer support services at Mount Sinai Beth Israel Downtown Cancer Centers in New York.

“When you’re first diagnosed with cancer, everything is really raw,” she says. “People might be apprehensive about participating based on personal reservations, but these appearance-related programs can help them feel less isolated by connecting them to other cancer patients, while providing a fun, therapeutic outlet within the cancer center.”

Doing something enjoyable and creative for yourself can provide the mental boost you need to fight hard another day, agrees Linda O. Williams, of Brooklyn, New York.

Williams was undergoing treatment for a neuroendocrine tumor and liver cancer at Mount Sinai Beth Israel Cancer Center when she signed up for a workshop sponsored by Fashion Fights Cancer. Based in New York City, the nonprofit offers people with cancer an opportunity to express their creative sides through fashion- and design-oriented activities.

Both volunteered their time. Eventually, Williams and other participants found themselves on the other end of the lens, serving as models in their own professional photo shoot. “We did individual photos and group shots. Some women were bald; some bared their mastectomy scars,” recalls Williams.

The sessions were anything but bleak. “There was music and singing and dancing. We tried on hats, jewelry and accessories.

We laughed a lot. It was one of the most uplifting moments of my life,” says Williams, who formed lasting relationships with the women in her session. She also stayed in touch with Zaccagnini, who often emails the group to see how they’re doing.

The bonds that Williams forged through Fashion Fights Cancer positively affected her attitude. “Cancer patients belong to a special community of people,” she says.

Williams has since participated in other Fashion Fights Cancer workshops, including one where she designed and made a handbag with the guidance of accessories designer Katherine Kwei. “It was so nice to have something creative to focus on besides the magnitude of my cancer diagnosis,” says Williams.

Look Good Feel Better does not offer a group program specifically for men, having found little interest in face-to-face workshops for these patients. But the organization does offer a brochure and a website with a video, at lookgoodfeelbetter.org/programs/men/, that give instructions to men about how to manage skin changes, hair loss, stress, nutrition and exercise.

For the patients more interested in participating in programs, there are many benefits to living in the fashion hub of New York City, as Williams does. She has been able to select gorgeous, high-priced designer clothes for free through a program called Fabulous and Fighting, a nonprofit that collaborates with fashion houses to donate new apparel to people with cancer.

“Every time I slip on the blouse or jacket I chose, I feel beautiful,” says Williams. “This isn’t frivolous stuff. People with cancer don’t have time for nonsense.

Everything we do that allows us to get through another day is important. Moments like these, that lift your spirits and make you feel beautiful, truly matter.”
Be the first to discuss this article on CURE's forum. >>
Talk about this article with other patients, caregivers, and advocates in the General Discussions CURE discussion group.