Right on the Head: JAK Inhibitors May Reverse Hair Loss 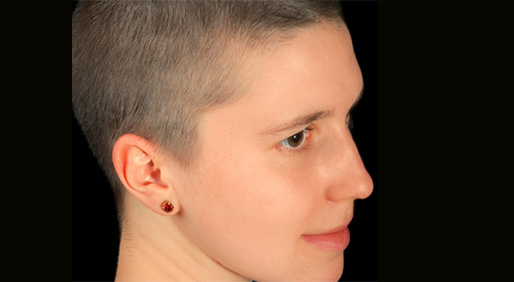 OUR HAIR IS A large part of our identity. When asked to describe someone, their hair is usually one of the first descriptors we use. Losing our hair can be traumatic regardless of the cause, and for people who have cancer, alopecia (hair loss) can trigger feelings of lack of control in an already overwhelming situation.

Until recently, there hasn’t been much to offer for the treatment of alopecia. For those who want to prevent hair loss while undergoing chemotherapy, scalp cooling caps that chill hair follicles, protecting them from chemotherapy damage, are becoming more widely available. And taking Biotin, or vitamin B7, during chemotherapy may help to preserve hair if the anticancer drug tends to cause only partial hair loss.

But now there’s also promising news for some who have already lost hair. Over the past few years, evidence has been accumulating that a class of medications called Janus kinase (JAK) inhibitors — used to help treat myeloproliferative disorders such as polycythemia vera, as well as other conditions — can also help resolve alopecia areata (AA), hair loss caused by an immune system malfunction. This condition affects some people treated for cancer, but also many others.

The last two-and-a-half years have revolutionized treatment for this form of hair loss, which can cause people enormous despair, says Brett Andrew King, M.D., Ph.D., assistant professor of dermatology and medical director of Yale Dermatology-Middlebury in Connecticut, in an interview with CURE ®.

“Alopecia areata affects (at least) 3 to 5 million Americans and 100 million people worldwide,” he says. “Three years ago, there (were few) treatments for severe disease, and now there’s increasing acceptance that a relatively new class of medications will effectively treat the condition.”

Experts reiterate, though, that JAK inhibitors won’t treat all types of alopecia. “It’s important to note that, so far, we know that the JAK inhibitors are only useful for those types of hair loss that are mediated by inflammation,” says Mario E. Lacouture, M.D., director of the Oncodermatology Program at Memorial Sloan Kettering Cancer Center in New York City. This type of hair loss occurs in 1 to 2 percent of the population, he explains, including many patients who have received chemotherapies. In addition, some cancer treatments, such as the new immunotherapies, result in this type of hair loss in one out of 50 people. “The JAK inhibitors would have a potential benefit in some cancer patients and survivors,” Lacouture says. However, they are not expected to work in cases where chemotherapy is the direct cause of hair loss.

There’s a reason the drugs work specifically in those with AA.

In fact, unlike in AA, experts “don’t know exactly what causes male-pattern baldness or female-pattern baldness,” King continues. However, they do know of one strategy that has proved helpful for that condition over the past few years: Rogaine, a topical form of minoxidil, which is a blood pressure medication. In pattern baldness, he says, “Rogaine seems to rejuvenate some hair follicles.” Rogaine may also work for those with mild AA.

Both Rogaine and Xeljanz were found to have an effect on alopecia accidentally, as people taking the drugs experienced renewed hair growth. However, taking JAK inhibitors to treat alopecia would not be expected to confer any protections against cancer, as no studies have been done that demonstrate such an association, King says.

Besides Rogaine, more typical treatments for AA include steroids, the psoriasis medication Dritho-Scalp (anthralin), topical immunotherapy and photochemotherapy (which involves the patient taking a light-sensitive drug and then exposing the scalp to ultraviolet light).

JAK inhibitors have been approved by the Food and Drug Administration (FDA) to treat people with blood and autoimmune diseases. In the cancer arena, Jakafi (ruxolitinib) is approved to treat myelofibrosis and polycythemia vera. Meanwhile, Xeljanz (tofacitinib) is approved to treat rheumatoid arthritis, and Apoquel (oclacitinib) to treat dermatitis and associated issues. Many other JAK inhibitors are being tested in clinical trials.

JAK inhibitors interfere with the body’s ability to generate enzymes called cytokines, which stimulate growth signaling pathways. If unchecked in polycythemia vera, for instance, these growth factors stimulate cells to grow and divide excessively in the bone marrow, causing blood to thicken, increase in volume and have problems flowing through vessels.

Recently, King and his colleagues published the results of studies that tested JAK inhibitors as treatments for AA.

In February 2017, “we published a study of 90 adults who were treated with tofacitinib,” King said. “At the same time, we published a study of 13 adolescents, between the ages of 12 and 17 years, treated with the same medication, and before that, in November, the results of a clinical trial involving 66 adult patients.” King and his colleagues also published the results of a single teenage patient’s experimental use of Jakafi, which the researchers had compounded so it could be applied to the skin, rather than taken orally. The results of all the studies have been promising.

In the larger study of Xeljanz (40 men and 50 women), 77 percent of the 65 patients who were thought to be potential responders experienced hair regrowth; 58 percent of them experienced an improvement of 50 percent or more. In the clinical trial involving 66 subjects (31 men and 35 women), 32 percent had a brisk response to the medication over three months. And in the study of 13 adolescents, nine experienced complete hair regrowth, one participant whose hair started to regrow subsequently lost it again and three did not respond.

These medications must be taken continuously for their effects to continue. Discontinuing treatment results in a return of hair loss within a few months. As with all medications, JAK inhibitors may cause side effects. In the rheumatoid arthritis clinical trials, side effects reported with Xeljanz included fungal, bacterial and viral infections; diarrhea; headache; nasal congestion; sore throat; runny nose; and, rarely, cancer. The recently published studies in AA have shown that Xeljanz was well-tolerated among both adults and adolescents, though the numbers of patients in these studies were very small compared to the larger studies that will be necessary to determine safety.

The patient treated with Jakafi cream did not report any adverse effects. Side effects from the oral formulation, when used to treat blood cancers, include dizziness, weight gain, headache and gas; more serious side effects can include fatigue, bruising and a reduced ability to fight infection. Less is known about long-term side effects, as these drugs are relatively new to the market.

HOW JAK INHIBITORS ARE GIVEN

In the studies that used Xeljanz to treat AA, starting the dose was 5 mg twice daily by mouth. In some studies, depending on the response at three months, dosage was increased up to 10 mg twice daily, or it was given in conjunction with 300 mg of pulsed prednisone (a steroid), once monthly for three doses.

While JAK inhibitors are currently available only in oral form, they can be compounded into creams by specialty pharmacies. King tested a topical formulation of Jakafi on a 17-year-old female who had alopecia universalis, an advanced form of AA. The patient applied the cream twice a day to her scalp and eyebrows for 12 weeks. Her eyebrows were restored and she had partial growth of the hair on her scalp. She then switched to the oral medication and grew a full head of hair. The results indicate that the cream version of the medication was just as useful as the oral version, King has said.

Because topical formulations are not the norm, their use can be met with obstacles. “We have to use a specialty pharmacy that will compound (the medication), and many times we have issues with this being covered by insurance,” Lacouture says. “I hope that, in the future, we have many different vehicles in which we can use these medications topically, which will minimize the risk for side effects and provide as much benefit as the oral tablets.”

JAK inhibitors are quite expensive, and it’s not yet clear whether cosmetic formulations would be less costly, or whether they would be covered by health insurance, the doctors said.

There has been speculation that cyclindependent kinase (CDK) inhibitors and Wnt inhibitors may also be promising treatments for alopecia. One CDK inhibitor, Ibrance (palbociclib), has been approved by the FDA to treat breast cancer; Wnt inhibitors are still experimental.

According to King, there is evidence of the Wnt pathway being involved in male- and female-pattern baldness, but that observation is not likely to lead to a new treatment any time soon. “There is some evidence that the CDK signaling pathway may be important in chemotherapy- induced baldness, but that observation, too, is not likely something that is on the edge of practical application,” he says.

Researchers are continuing their work to find solutions for people who live with alopecia.

“Patients who have hair conditions, including oncology patients and survivors, should not feel that they have to suffer or live with these conditions for the rest of their lives,” Lacouture said. “There are many options right now to treat or minimize hair problems that they may face as a result of their chemotherapy, immunotherapies, radiation or surgical procedures.”
Be the first to discuss this article on CURE's forum. >>
Talk about this article with other patients, caregivers, and advocates in the Side Effect Management CURE discussion group.