Speaking the Language of Lung Cancer

What to say and what not to say to a loved one impacted by cancer.
BY Jeannette Moninger
PUBLISHED May 03, 2017 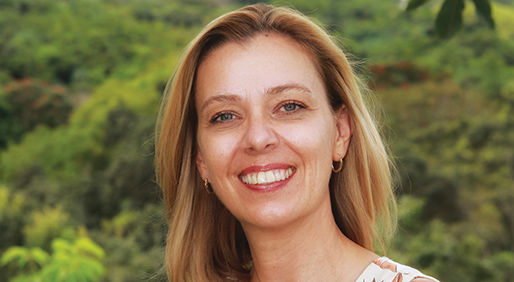 KAREN “K” LATZKA, a non-small cell lung cancer survivor, says quickly found herself on the defensive following her cancer diagnosis. - PHOTO COURTESY OF: KAREN LATZKA
When Karen “K” Latzka developed a cough that wouldn’t go away, the Kaneohe, Hawaii, resident didn’t give much thought to her former cigarette smoking days. After all, it had been a decade since she last lit up. “I had forgiven myself for poisoning my body and was hiking and enjoying an active lifestyle,” Latzka says. “My lungs felt great!”

But in 2010 at age 46, Latzka learned she had stage 3 squamous cell lung cancer, a type of non-small cell lung cancer commonly seen in smokers. Still reeling from the diagnosis, Latzka quickly found herself on the defensive, constantly fielding the inevitable question that every person with lung cancer dreads: “Did you smoke?”

At first, Latzka shouldered the shame and blame ingrained in that question. “I thought I deserved people’s disdain, that my years of nicotine addiction meant that I wasn’t worthy of compassion,” she says. It was a very dark time for Latzka, and people’s reactions didn’t help.

Quickly, though, she came around to the idea that she didn’t deserve that burden. “No other patient with cancer is so overtly blamed for their disease in most every encounter after their diagnosis,” she says. “I deserved compassion.”

BEARING THE STIGMA OF LUNG CANCER
Smoking and lung cancer have been inextricably linked since the U.S. Surgeon General’s landmark report in 1964 detailed, for the first time, the now well-known health risks of tobacco use. “The valuable information in this report has saved thousands of lives by encouraging people to quit smoking and keeping others from ever starting,” says Carly Ornstein, national director of lung cancer education at the American Lung Association.

Unfortunately, according to Ornstein, an unintended consequence is that the findings cemented in the public’s mind the idea that only smokers get lung cancer. In reality, approximately two thirds of lung cancer diagnoses are in never smokers or former smokers, although the majority of these are former smokers. “The fact is that it is not always clear what causes a person’s lung cancer or any other cancer,” says Ornstein. “But, what is clear is that all patients with lung cancer deserve support.”

Genetic mutations may be to blame for certain lung cancer cases. Other potential risk factors include exposure to chemicals, such as asbestos, arsenic or secondhand smoke. The Centers for Disease Control and Prevention (CDC) estimate that radon, a radioactive, odorless gas naturally found in soil, contributes to 20,000 new cases of lung cancer every year, making it the second-leading risk factor for the disease.

Furthermore, even among smokers and former smokers, there’s mystery surrounding why some get lung cancer and others don’t. It’s not a simple cause-and-effect equation.

Regardless of whether there’s a history of tobacco use, people with lung cancer face stigma. A survey conducted by The Lung Cancer Project found that 3 in 4 respondents think negatively about patients with lung cancer. Sadly, this includes caregivers and health professionals. In another survey, from the American Lung Association, up to 45 percent of respondents felt that smokers who develop lung cancer either deserve it, should have known better or should have quit sooner.

This thinking doesn’t address the fact that anyone with lungs faces some risk of lung cancer. It’s true that smokers, both current and past, bear the heaviest burden of this life-threatening disease, but no one who has lung cancer is immune to the stigma that shadows it.

WHEN STIGMA LEADS TO SILENCE
Studies have found that patients with lung cancer report higher levels of distress — both social and emotional — compared with other cancer groups. These findings are based on questionnaires and Distress Thermometer results. Patients with lung cancer also have more problems opening up and talking with loved ones and health professionals, perhaps because they feel responsible for their situation. As a result, relationships suffer.

High levels of shame and guilt can lead to feelings of isolation and despair. The stigma from the disease even keeps some people from seeking medical treatment or getting help for their depression. At a time when a shoulder to lean on is so crucial, many people close themselves off from the family and friends who most want to help.

San Diego resident Barry Davis knows firsthand how this feels. His typically rosy outlook on life shifted 10 years ago when he received a diagnosis of adenoid cystic carcinoma, a rare form of lung cancer, that was already guessed by his oncologist to be stage 3. “I was a 47-year-old avid runner who never smoked,” he says. Davis’ spirits sank even more when he learned that the five-year survival rate for lung cancer was less than 20 percent.

As Davis began radiation and chemotherapy treatments, he worried about how his diagnosis and care would affect his wife, daughter and loved ones. In a misguided attempt to protect those he loved, Davis started shutting them out. “Lung cancer packs a one-two punch: There’s a low survival rate, plus a widespread misperception that the disease is self-inflicted. Your first reaction is to ask everyone to leave you alone,” says Davis, who slipped into a state of depression for months after his diagnosis.

His wife, though, refused to let him wallow for long. “She knew that I was the type of person who benefits from taking action,” Davis says. “She signed me up for a 5K (run) fundraiser for Free to Breathe, a nonprofit organization dedicated to finding new lung cancer treatments. She coaxed me into getting involved with support groups, both local and online,” he says. Davis now regularly gives educational talks about lung cancer for his local Free to Breathe chapter.

Some degree of sadness and grief is to be expected following any cancer diagnosis. A loved one may need professional help for depression — perhaps in the form of counseling or antidepressant medications — if he or she stops participating in favorite activities, gives up on treatment or becomes easily irritated and angry, says Win Boerckel, lung cancer program director for CancerCare, a national organization based in New York City that provides free professional support services for people with cancer. “Patient navigators at treatment centers can connect patients and loved ones with local and online support resources,” he says.

TALKING TO SOMEONE WHO HAS LUNG CANCER
Figuring out when to coax someone to talk and when to give them space is tricky. Also challenging is finding the right words to say. Here, lung cancer experts and those battling the disease offer these tips:

Think before you speak. Just about everyone knows some-one who has battled some type of cancer. Even if you have a “success” story to share — don’t. And especially stay quiet if the story doesn’t have a happy ending. “We’re already looking at a dismal survival rate for lung cancer,” says Davis. “We don’t need to hear horror stories about treatment side effects or people who didn’t make it.” Your mission is to spread hope, not fear.

Keep your opinions to yourself. Unless you have a medical degree or training, don’t offer advice about herbal remedies or alternative treatments that you found online. “It’s fine to ask ‘What are you planning to do?’ But the next step is to listen and be a friend. Don’t play doctor,” says Davis.

Take action. An open-ended “Let me know if there’s anything I can do” can overwhelm someone who is undergoing treatments. “Expecting someone who isn’t feeling well to give you instructions just adds to their burden,” says Ornstein. Instead, take the initiative. “A friend rang my doorbell one night, greeted me with a still-warm jar of homemade spaghetti sauce and a box of spaghetti, then turned around and left. It was perfect!” says Latzka. Consider calling your loved one from the grocery store and asking what items you can pick up, choose a day to do yard or house work, or serve as chauffeur for the day.

When in doubt, ask. After Kristi Kamada was diagnosed with lung cancer last year, a friend worried that she would annoy or upset her by asking how she was feeling. “Because my friend was open and honest, I was able to tell her that I wouldn’t mind if she asked me that question every day. It’s nice to know she’s thinking about me,” says Kamada, who lives in Anaheim Hills, California. Of course, not everyone will feel the same, which is why it’s important to ask when you’re uncertain.

Stay connected. When someone first receives a cancer diagnosis, there’s a surge of support. But the cheerleading, meals and offers of help can wane over time. “It’s important to remember that people with lung cancer are going through long-term treatments that can be hard on the body and spirit,” says Boerckel. Every morning, Kamada gets a boost from an inspirational text sent from a friend. Another friend sends cards each week. “It is so uplifting to know that my friends are caring for me months after my diagnosis,” she says.

Pay attention to your body language. Your mannerisms and nonverbal communication are every bit as important as your words. “It’s important to make eye contact when you’re talking about something as serious as cancer. When you look away you imply that you’re scared or uncomfortable,” says Cara Fairfax, a patient navigator and clinical social worker at the Douglas & Nancy Barnhart Cancer Center at Sharp Chula Vista Medical Center in Chula Vista, California. Also, don’t be afraid of silence. “Just sitting with someone, holding their hand, rubbing their shoulders or offering a comforting shoulder to lean on is extremely powerful and very much appreciated.”
Be the first to discuss this article on CURE's forum. >>
Talk about this article with other patients, caregivers, and advocates in the Lung Cancer CURE discussion group.