Going to the Dogs

After breast cancer, one woman found new purpose and renewed relationships by adopting a special puppy. Now, she fosters others.
BY Stephanie Bouchard
PUBLISHED October 24, 2019
When Marika Meeks was undergoing treatment for breast cancer, she funneled all her energy into surviving. After two years of treatment, she got the good news that she was cancer-free. But this woman who had started and run her own businesses was at a loss. She had survived, but now what? For the first time in her adult life, she lacked focus.

Then she met Stella the pit bull and not only regained her sense of purpose but also found healing for herself and her family.

In January 2013, Marika was close to wrapping up negotiations to open a third sandwich shop in Fort Wayne, Indiana, where she and her family lived, when she learned she had stage 3 estrogen-positive breast cancer involving multiple lymph nodes. She got the call just a few days before her 41st birthday. 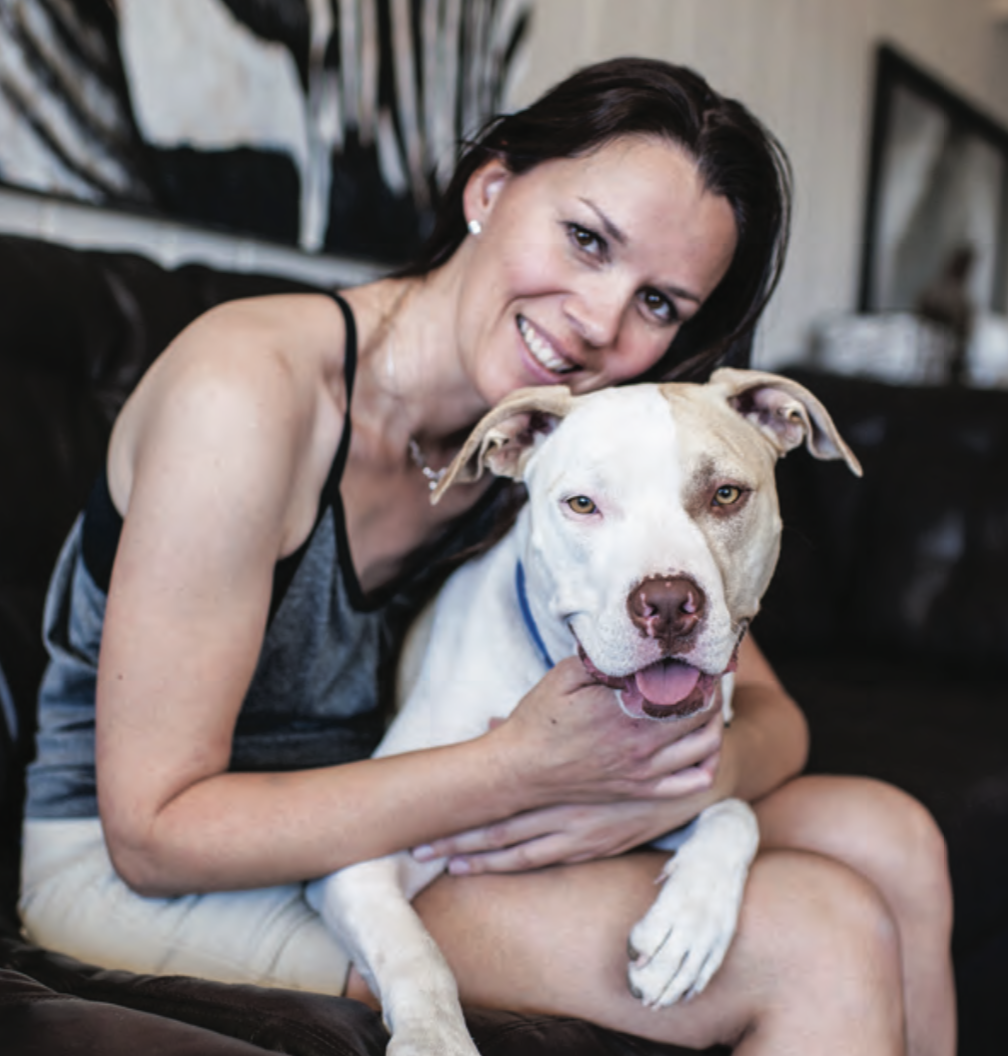 As is her nature, she threw herself into her cancer treatment, which included traveling to New York and living apart from her family for more than half a year so she could attend a clinic in Scottsdale, Arizona. Her husband, Brian Meeks, ran her three shops as she recovered.

It was a stressful time for the couple and their two teenage daughters, but Marika didn’t realize the degree to which her youngest daughter, Caitie Hamilton, was struggling until she got a call from Brian. Their daughter was missing and had left a suicide note, he told her. “I was here in Scottsdale, and she’s missing in Indiana,” Marika, now 47, says. “It was really, really traumatic.”

Hamilton was found safe. Marika had a teary conversation with her on the phone, telling her daughter she’d be home in a couple of months and they’d be together again. They promised each other they’d both hang on and take things one day at a time.

But returning home didn’t make everything all better again. The two couldn’t seem to reconnect and remained awkward with each other. And although Marika had been declared cancer-free after two years of treatment, she wasn’t coping well with the emotional toll the cancer experience had on her and her family.

“I felt as though when I got back home and it was time to live a normal life, I had completely forgotten what that meant, and I didn’t know what to do with myself,” she says. “I didn’t wake up in the morning with my arms out and think (about) how vibrant the sky was and how grateful I was to be alive. I was really stuck in this place of just being so afraid still and overwhelmed and self-absorbed and so worried about the next shoe that was going to drop.”

She felt terrible guilt that she wasn’t living up to the stereotype of the brave cancer warrior with a positive attitude when she knew how lucky she was to be alive.

To relieve her suffocating anxiety and guilt, she spent a lot of time scrolling through photos of dogs. She and Brian had agreed before they married that they wouldn’t have pets, but after a chance encounter with a dog during her Scottsdale treatment, Marika had been yearning for one.

Watching his wife struggle to find her footing and knowing she was always looking at dogs online, Brian finally urged her to fill out an adoption application at their local shelter. She wasted no time.

At an adoption event four days later, Marika met Stella. The 7-month-old pit bull captured her heart instantly, but the transformation of her life when she got Stella home verged on the miraculous. Almost immediately, Marika and Hamilton bonded again. The day Stella arrived, mother and daughter reconnected as they both fell in love with the new puppy. “It was
like we had this common interest, this common love of this experience, that we so badly wanted to share together,” Marika says. “We just snapped back together again. ... She gave me my daughter back.” 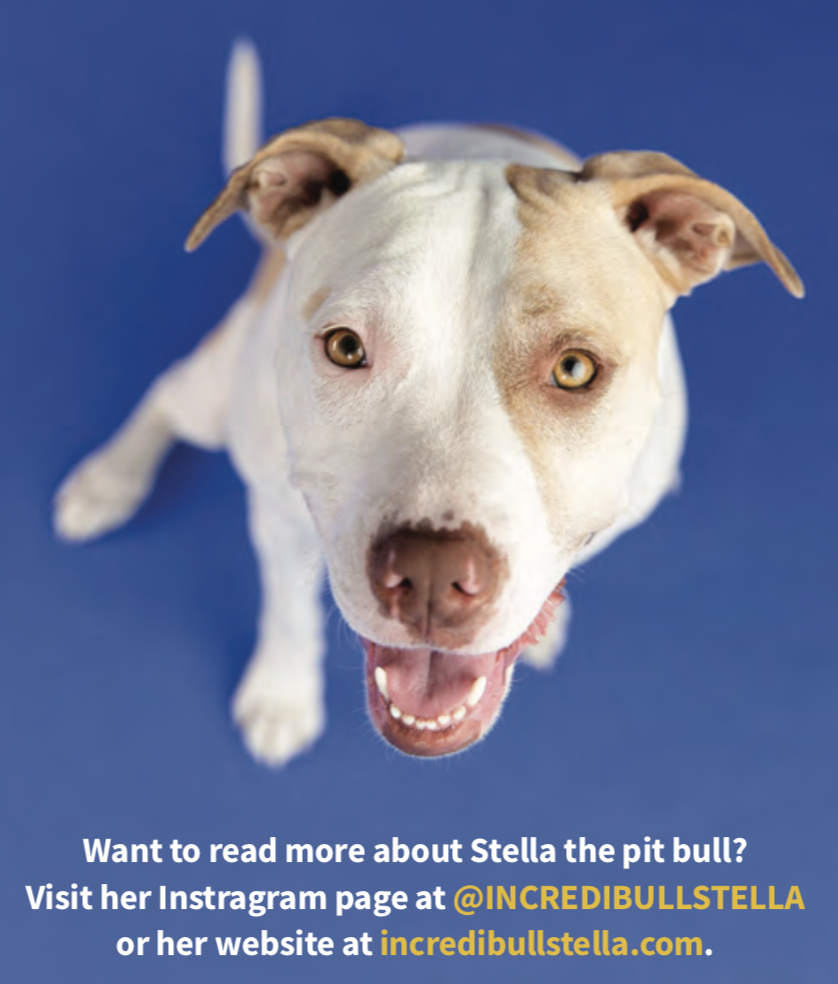 Stella gave Marika a new purpose, too. “I was just so excited,” she says. “I had something to look forward to again.” When she took Stella out, people couldn’t resist her lovable dog. “I realized I needed to pay the joy Stella brings to people forward, not to keep it all to myself,” she says.

Her older daughter, Carly Hamilton, urged her to set up an Instagram account and share photos of Stella. Marika didn’t know anything about the app but quickly got the hang of it. Within a few months, Stella had 20,000 followers. Her followers on Instagram and Facebook now exceed 77,000.

Seeking to share the joy Stella gave her and offer adults going through traumatic experiences a therapeutic tool, Marika self-published “The IncrediBullStella Coloring Book & Story,” which shares the tale of her and Stella. A percentage of the proceeds from sales provide funding for spay and neuter initiatives.

Still, Marika wanted to do more.

When she adopted Stella, she learned that the puppy had been found abandoned by the side of the road. Stella was taken to a shelter and placed with a foster family to recover and get ready for adoption.

Marika was impressed that people opened their homes to abandoned and, frequently, badly damaged animals. “I decided if I was blessed with having this second chance at life, I wanted to pay that forward and give these dogs a second chance, too,” she says.

Brian agreed to her plan. Their first fostering experience was with two very ill 7-week-old puppies rescued from a negligent breeder. The couple gave them baths, fed them and ate their own dinners one-handed as the puppies sat on heating pads on their laps. “It was pretty amazing, because I’d been gone for a long time (for treatment), and that puts a hole in your marriage,” Marika says. The experience of caring for the sick puppies brought the couple together.

In the three years since adopting Stella, Marika sold her sandwich shops and made animal rescue and advocacy her full-time job. She and Brian have cared for and rehomed about 40 dogs. The couple and their youngest daughter moved to Scottsdale about three years ago after falling in love with the area. Stella received the Arizona Pet Project’s Loyal Companion Award in 2018, and Marika was named DOGTV’s Dog Mom of the Year in May.

A book about their story, “Incredibull Stella: How the Love of a Pit Bull Rescued a Family,” was released in late August.

A follow-up sharing animal rescue stories is in the works, as is a reality TV adoption show, “The Dog Moms of Scottsdale,” scheduled to start filming in October.

“I’ve been an entrepreneur since I was 19 years old, and I’ve been successful,” Marika says. “(But) I feel for the first time in my life I’m truly on a mission with what I’m doing.”
Be the first to discuss this article on CURE's forum. >>
Talk about this article with other patients, caregivers, and advocates in the Breast Cancer CURE discussion group.