Running in the Family

Ellen Wiss and her daughter, Aria Maslow, whose individual journeys with breast cancer started 19 years apart, participated in the Donna Half Marathon during the Donna Foundation’s annual marathon weekend, held Feb. 8-10. The event raised funds to support genomics research conducted at Mayo Clinic Cancer Center in Jacksonville, Florida, as well as provide patients and their families with financial assistance.

“I’m very connected to this community, and I was so excited about this effort that was trying to help raise funds specifically for an institution that I had complete faith and personal experience with — and also around the issue of breast cancer,” Wiss said. 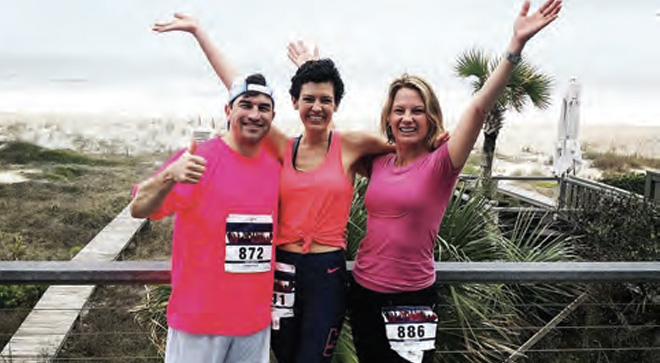 ARIA MASLOW, center, participated in the marathon with her husband, JED, and her mother, ELLEN WISS.

In October 1998, two years after her sister’s breast cancer diagnosis, Wiss, then 35, felt a lump in her own breast. After a mammogram report suggested she had nothing to worry about, she continued to pursue testing — an ultrasound and eventual biopsy — which ultimately led to her stage 1 diagnosis. “The message there is that you can’t underestimate the power of self-breast exams and being proactive about your own health,” she says.

Nineteen years later, with initial detection by a self-exam, Maslow received a diagnosis of stage 2 disease at age 29. “My mom instilled upon me … to self-advocate and let every doctor I saw know about my health history,” she says. “Two months after I ran my first full marathon, I found (a lump), and a month later I was diagnosed.”

As Wiss neared being 10 years cancer-free, she discovered the Donna Foundation and its marathon weekend through Mayo Clinic, where she, her father and her daughter were all treated for malignancies. The most recent event was the pair’s seventh race with the foundation.

“It’s been a real bonding experience for my daughter and me,” Wiss says. “This year, after coming out on the other side of all of her treatments, it was all that much sweeter to run that race together in honor of our family. It’s a strong symbol of hope and real success. The research and medical advancements that have occurred as a result are remarkable, and to see the difference of what is available today compared with 20 years ago is a true testament to the value of investing in these causes.”

This year’s weekend proved successful again, as of March 31 raising $313,801 plus a $100,000 gift from the Weaver Family Foundation. The Donna Marathon, which takes place in Jacksonville every February, is the only marathon in the U.S. dedicated to breast cancer research, awareness and care. Its events include the Social Shakeout Run, a 3-mile run/walk with foundation founder Donna Deegan, special guests and the VIPinks (financial supporters of Bright Pink, which works for breast and ovarian cancer prevention); an expo featuring apparel, fitness gear, free samples and other giveaways; and a marathon, half-marathon, team relay, 10K, 5K and 110-mile ultramarathon.

“I have never been in a more touching race, just seeing so many people there that are running for family members, a purpose — not just running to run,” Maslow says. “I’ve run a lot of races, and to this day I have not been in a race that has had more support. That blew me away.”

“We did it, and we did it together,” Wiss adds. “There is so much to celebrate.”
Be the first to discuss this article on CURE's forum. >>
Talk about this article with other patients, caregivers, and advocates in the Breast Cancer CURE discussion group.