A Nurse's Legacy After Breast Cancer Continues to Help Children

Even after her death from breast cancer, a pediatric nurse continues to help heal children with a book meant to lift their spirits and raise money for their care.
BY Beth Fand Incollingo
PUBLISHED February 12, 2020
Mary Shepherd dedicated her life to helping children.

As a nurse in Florida and then Georgia, she cared for youngsters in the pediatric intensive care, emergency and trauma units. At home, she and her husband raised their own children.

Shepherd did it all despite the breast cancer she lived with for nearly 20 years. The disease took her life in June 2019, when she was 57, but she is still making children feel better. A book she wrote during her final years, “Hugzbie’s Christmas Adventure,” continues to not only brighten youngsters’ days but also raise funds for the nonprofit St. Jude Children’s Research Hospital in Memphis, Tennessee. Illustrated by Lorraine Dey, it was published by Shepherd’s family in November 2019, about half a year after her death.

“This book and the proceeds from it are dedicated to nonprofit children’s hospitals,” Shepherd wrote in the book’s dedication. “They care every day for those precious children who need medical attention and their worried parents. My hope is that Hugzbie will take them along on his adventure and, for a time, ease any stress they may be feeling.” 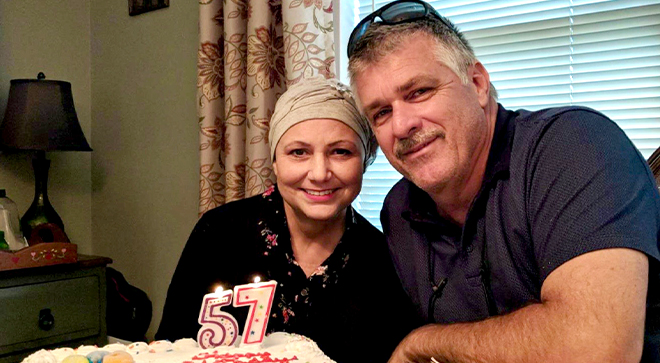 In the story, a hedgehog named Hugzbie takes an unexpected trip from his country home to New York City, where he has an adventure with a new friend. By the end, he has learned the meaning of friendship and developed a renewed appreciation for his family.

Shepherd, who stopped practicing as a nurse in 2004 to be home with her children, started writing the book when they were older, and she was unable to return to work due to her progressing cancer and its treatments. “I still wanted to make a difference in children’s lives,” she wrote in her bio on the book’s back cover. “It was the perfect solution: I could work on it during days I felt good and put it down when I didn’t.”

She finished the story before she died, even seeing an early mock-up of the book. Her family finished the job, editing the work and self-publishing it. “It was a privilege for the family to bring it to publication,” her mother, Marilyn Mahanor, said.

Shepherd was 39 and her youngest child was 2 when she received an initial diagnosis of invasive lobular carcinoma that had spread to her lymph nodes. She had discovered the cancer in a self-exam she did after learning that a friend had recently undergone a breast biopsy. Her treatment began with chemotherapy to shrink the tumor and was followed by mastectomy, breast reconstruction and more chemotherapy.

“When I came to my five-year post-breast cancer mark, I felt a sense of relief ... I knew if the cancer was going to come back, it would most likely be within the first five years,” Shepherd wrote in “Living Happy With Stage IV,” an essay. “About seven years after my initial diagnosis, I was experiencing back pain (that was) relentless and would not go away.” It was initially diagnosed as arthritis but turned out to be cancer that had spread and compressed one of her thoracic vertebrae, necessitating surgery.

After six years on the drug Herceptin (trastuzumab), which fights breast cancer that overexpresses the protein HER2, the cancer spread again, this time to Shepherd’s intestines, bladder and lung.

In her essay, Shepherd recalls a dark moment in her cancer journey when she cried for 15 minutes on her closet floor in the middle of the night, hoping not to wake up her exhausted husband. She reveals the epiphany that followed: “I am not getting those 15 minutes back, and what a complete waste of time that was.”

Although Shepherd prepared for her death, speaking with her loved ones about it and gathering gifts for her children in case she didn’t make it to their wedding days, “I decided right then that I was not going to worry anymore, (that) God knows what he is doing and I should just continue to enjoy my life,” she wrote. “It was a conscious effort at first, and I had my ‘mini meltdowns,’ but eventually it became natural.”

Shepherd suggested that others benefit from what she learned. “There are only so many moments we all have to live, so don’t waste them worrying about the things you can’t change. Enjoy all the precious moments,” she wrote. “Enjoy the little things in life, be patient and kind ... be happy.”

Shepherd hoped her book would help readers accomplish that. “It is my deepest hope,” she wrote, “that the book will bring a smile to the children’s faces and the proceeds will continue to help support children’s hospitals.”
Be the first to discuss this article on CURE's forum. >>
Talk about this article with other patients, caregivers, and advocates in the Breast Cancer CURE discussion group.