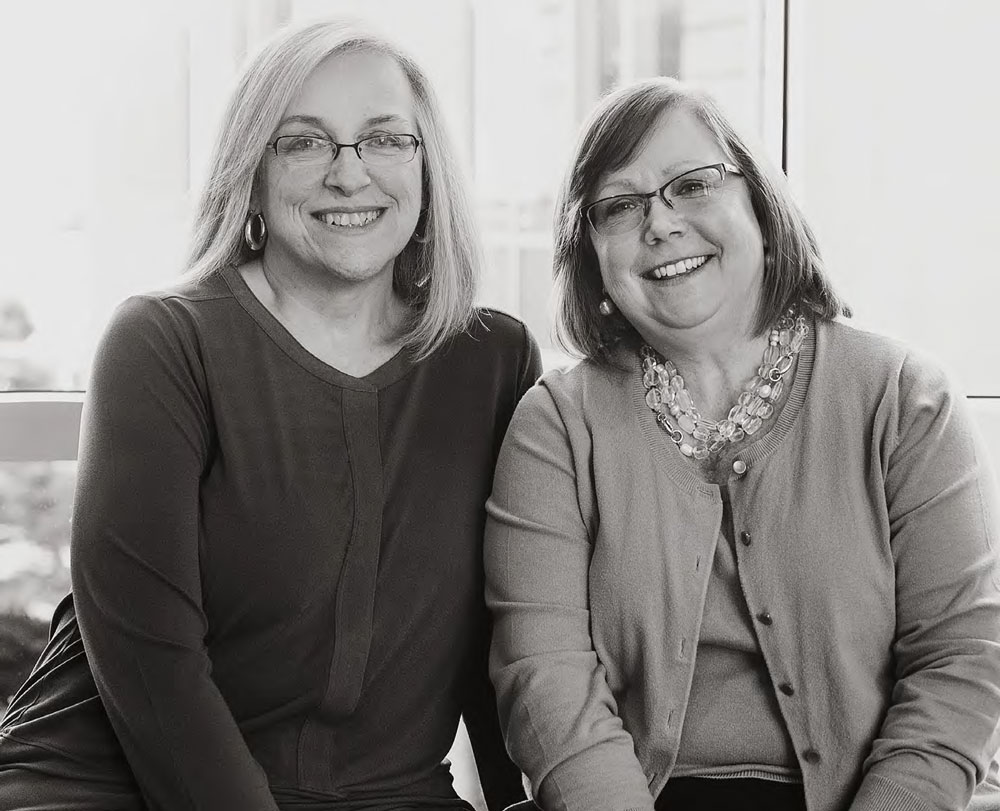 Barbara Underwood, RN and Catherine Hugues [PHOTO BY SARAH JEAN HUDIBURG]
AS A SURVIVOR of a rare cancer that has recurred twice, I would say that I have spent an unusual amount of time in Barbara Underwood’s care. I first met her when I was referred to Dr. Romeo Mandanas in October 2006. I was still recovering from the treatment I had received for germ cell teratoma of the mediastinum while on active duty with the US Air Force in Germany. My husband and I were wary of trying to navigate the ins and outs of coordinating care through our military health care plan, and were afraid it would end in my inability to see whomever I needed to see in a timely manner. Barbara’s willingness to work directly with our case manager and to spend the time needed to get all the referrals through was a true godsend.

When the cancer recurred in June 2007, Barbara was instrumental in helping my husband and I to make the arrangements to get in to see Dr. Lawrence Einhorn at Indiana University. Getting an appointment with a famous cancer specialist isn’t easy, but we succeeded with Barbara’s help. Following a full thoracotomy, I had a lot of complications with the recovery, including spending time in the hospital for pericarditis.

All throughout this time, Barbara always kept tabs on the problems I was having, and I knew that I could call her with any symptom (however gross) or any problem and she would get back to me in record time with a solution. She coordinated sending medical records and making sure that reports from other specialists made it into my records. This would be important when the time came for my Veterans Administration disability claim. You could say that this is part of her assigned duties, but I’m pretty sure that not many nurses would take the time to stand by the copier for hours and make sure that everything I needed was properly copied and legible.

When I got the heartbreaking news in March 2008 that the cancer had recurred a second time, Barbara was there, helping to coordinate a transesophageal biopsy with the only physician in Oklahoma who did them before that doctor went on vacation. The aftermath of the aggressive treatment I received left me in remission, but with a lot of other medical problems. Every time I was in to see Dr. Mandanas, Barbara took the time to chat with me, listening to what had been happening with me health-wise, but also about other things that had nothing to do with cancer. I don’t know how, but she remembers what you tell her, and can always make you feel like you’re a person first, not just a big bloated bag of cancer cells.

As we moved forward in my recovery, it became apparent that the recurring illnesses I was having were not because of allergies. I had been complaining to her that I had been repeatedly sick and that I had lived in Oklahoma long enough to know I didn’t have allergies before. At her insistence, Dr. Mandanas ordered some blood tests to see whether my immunoglobulins were low. While overall the test revealed a slightly lower level, initially it didn’t seem as if that was the problem.

After another several months of being on antibiotics every other month, I had pretty much had enough. It was a phone call between Barbara and me that instigated a deeper investigation, which revealed an immunoglobulin G4 deficiency as a result of my treatment. I know I wasn’t very nice on the phone that day. Once again sick with fever and the pain of a raging sinus infection, my attitude was, “I’m sick again. I hope you people are happy.” Barbara calmly asked me to come in for a blood draw and phoned in yet another prescription for antibiotics.

Those blood tests finally got to the root of why I had so many illnesses. If Barbara hadn’t taken the initiative to look deeper into the problems I was having, I’m sure I would not have overcome the respiratory distress and recurring infections that were making me wonder why I had beaten cancer three times to live like this. I was sure I would end up on an oxygen tank with chronic obstructive pulmonary disease. I now receive an immunoglobulin infusion once every three months and have gone as long as 18 months without being on antibiotics.

Now, nine years later, I still look forward to seeing Barbara at my quarterly appointment. Of course, since I’m not really “sick,” my visits are mostly catching up on trips and Broadway shows with Barbara, having Dr. Mandanas tell me the same things he did the last time, and then off to my infusion. Barbara still keeps tabs on what is going on with any medical problems I’m having and makes sure that Dr. Mandanas knows when he is needed to weigh in on something due to my immune system deficiency. My cancer story started in 2005. The actions and caring of Barbara Underwood are one of the primary reasons I’m still here to tell that story.
Be the first to discuss this article on CURE's forum. >>
Talk about this article with other patients, caregivers, and advocates in the General Discussions CURE discussion group.