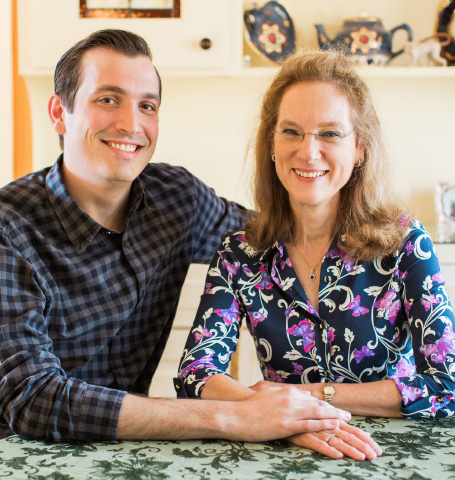 Wendy Harpham and her son, Will PHOTO BY JARED REY
Wendy Harpham answers the door of her Dallas home with her "morning energy,” that time of day when she is at her best and not yet at the mercy of cognitive and fatigue issues, the result of nine separate courses of cancer treatment. These early hours find her at the computer where she writes about the latest cancer news, trying to put it in context and nourishing hope among the many followers of her columns, blogs and Facebook page where she communicates with other cancer survivors seeking her help.


Harpham is far from the first person to survive cancer, nor is she the first to write about it. But her medical background and 25-year experience with survival offer an unparalleled breadth and depth of knowledge and understanding to both the oncology and survivor community, the latter now 14 million strong and growing steadily. And she remains passionate and steadfast about sharing her message, despite limitations from late effects of her treatment. “I think and talk and write about survivorship all the time, but I don’t think of myself. I tell my personal story for legitimacy and to share insights, but I don’t want my readers or attendees to look at me — I want them to look to me.”

In 1990, Dr. Wendy Harpham, 36, and her husband Ted, a college professor, were parenting their three children: 1-year-old Will, 3-year-old Jessie and 5-year-old Becky. In November, she experienced severe pain in her groin that she learned was caused by a lymphoma tumor pressing on a nerve. More staging information for her disease determined it was stage 3, meaning the cancer had spread. Harpham says the textbooks described “inevitable recurrence” with successively shorter remissions leading to death; the median life expectancy was about seven years.

“During my initial chemotherapy, I wrote a pamphlet for my reception room, which grew into my first book, Diagnosis Cancer,” she says. Harpham’s plan to return to her practice one month after completing chemotherapy was changed when bronchitis and colitis kept her home another three months, making her recovery 10 months.

“I was blindsided by the psychologic stress of recovery and no one was talking about what happens after cancer then, so I felt compelled to write After Cancer while home recovering.”

The word compelled is heard frequently in conversation with Harpham. “The book was something I had to do. But I had intended for that to be it. I had to be a doctor, and the writing was until I could get back to being a doctor.”

Her first recurrence was the next year. She and Ted had agreed that she would continue her medical practice unless she recurred. After closing her practice, she spent some time helping in another doctor’s office until she recurred again. She still recalls the date when she saw her last patient and began the transition from doctor to writer: May 31, 1993.

Her second recurrence dropped her life expectancy to two years. It also took her to a no man’s land where there were no longer protocols for treatment; she had moved beyond the existing research. Each time the cancer returned, she and Ted would meet at the kitchen table and take the research they had amassed to create a list of pros and cons, a family process that would eventually include the children as their ages allowed an understanding of their mother’s unique standing in the world of mothers.

While her physician self was used to researching for her patients, she now expanded her commitment to hundreds of thousands of cancer survivors.

In these family meetings Wendy brought her physician’s discernment and Ted brought his academic training. It was a time when lymphoma was being researched and new drugs were finally appearing for what had been a deadly cancer.

Perhaps the best choice the couple made was the decision to take part in a phase 1 clinical trial at Stanford Comprehensive Cancer Center in California for what was then a new drug called IDEC C2B8. Years later the drug would be called Rituxan (rituximab).

Both Harphams understood that phase 1 trials are designed not for a cure, but to test a new drug or treatment in a small group of people for the first time to evaluate its safety, determine a safe dosage range and identify side effects.

It would require that she travel to Stanford on a regular basis as one of only 15 in the trial. What no one expected was that the phase 1 trial would put her into a partial remission. It didn’t last, but the drug provided hope that there would be other options. She responded so well that she would take part in continuing trials for the drug, which was approved in 1997. Her last recurrence and treatment with a Rituxan cocktail was in November 2007 — she has been in remission since.

To understand the reach of Harpham’s journey is to look at the topics she has explored for her audiences, medical and survivor, in columns and speeches: recurrence, late effects, joy, pain, grief, parenting and a four-part series on uncertainty and hope. She once described it as “Dr. Harpham learning from patient Wendy” and then relaying insights and advice to those who need it — new patients who are dealing with cancer. It was about uncovering the realities of survivorship by peeling back the layers of an onion, each one hiding the next, and when the insight came, dealing with the urgency to get it out to her public.

“As soon as I understood something, I wanted to share it as quickly as possible,” she says. “I didn’t want to wait for a book. I would send a manuscript to someone who needed it. As soon as there was an insight, I would say, ‘That’s something that could help.’ I wanted to give it to everyone right away.”

The result has been seven books in addition to her columns for Oncology Times. After writing the first two books during diagnosis, Diagnosis Cancer and After Cancer, Harpham wrote When a Parent Has Cancer, which came with a small book she co-wrote with her daughter Becky called Becky and the Worry Cup. The Hope Tree came next and then Happiness in a Storm with her roadmap on how to find joy and happiness in the midst of the pain and uncertainty of cancer. Her last book, Only Ten Seconds to Care was to help clinicians find compassion and joy in patient care.

For Harpham, the key to survivorship is living the best life she can every day by prioritizing how she will spend her energy. Her books and columns reinforce this, as does her daily life as she has accepted that her ability to function has changed — an understanding that will resonate for many in the cancer community as survivors have continued to live longer. For Harpham, the fatigue and cognitive issues began after her third recurrence. Today, she lovingly refers to herself as a “Lexus with a two-gallon tank.”

“I am really good when I am ‘on’ — I am great. And it is hard when I don’t function well, but I have been fairly good at drawing boundaries. When I push myself, I pay the price.”

The challenges of late effects and a compelling mission have caused Harpham to plan her day down to her last bit of energy, and to know the result if she doesn’t listen to her body.

“I feel an obligation to my survivorship,” she says. “And I love writing. I push myself as hard as I can every single day. I would feel better physically if I didn’t.”

For example, with her doctor’s approval, she stopped the pain medication that kept the nerve pain from her original diagnosis under control because it affected her ability to think. “These are tradeoffs I am willing to make, and I know I won’t feel well in the afternoon because I pushed myself.”

Harpham says her discussions with her oncologist revolve around her desire to keep writing until she can’t.

Harpham has written extensively on family issues and cancer as she and Ted have raised their children in the midst of cancer survivorship. The result, she says, is family that doesn’t play games and one that has the capability to discuss very difficult issues.

“We have developed ways of communicating that allow us to talk about anything, and it’s not just about the rough times. It’s about sharing the joy and everything that is family.”

Today, the Harpham children are grown and on their own paths but securely connected to the thread that Harpham says connects them. Becky, a marketing director, and her husband are expecting the first Harpham family grandchild. They bought a house four blocks from her parents, and Harpham has the joy of seeing them regularly. Jessie is in the final stages of her medical residency out of state and will follow her mother’s footsteps into internal medicine with a focus on geriatrics.

Living with their mother’s illness and a continued understanding that she could be taken from them has given each a compassion and depth seldom seen in young adults.

Will, a fine artist and high school art teacher, has spent what he calls his whole life with cancer, and, on reflection, he says that while cancer is never a good thing, it has brought many good things into his life, including a closeness that most families don’t have, and how he cares for people, both those who are family and those who aren’t.

He also feels his parents did it right by including them in the discussions and never trying to deny the reality of their mother’s condition. He recalls how he and his sisters played with his mother’s scarves when he was 5 and knowing she had all the scarves because her hair fell out.

“I knew about white blood cells before I could spell the months,” he says. As he got older, Will says he remembers a few times of sadness when he accepted that his mother could die. “I remember being at camp, and we had to bring something relevant to our life that helped tell our story. I brought my mom’s book because at that age, 10 or 12, it was really important that my mom was around.”

It wasn’t the content of the book, Will says, it was a symbol that she was still here. Growing up with cancer was made easier, Will says, by sisters who were and are available for support. And, he adds, he had a father who was in it for the long haul.

“Once, we took mom to the emergency room at 5 a.m. when her pain got really bad. It wasn’t a question about what we needed to do, and we weren’t freaking out, it was just natural. Then we went to Whataburger because nothing else was open. It was a real bonding moment with my dad.”

Will says he doesn’t remember the gifts his parents gave him, but he remembers that moment with his dad. Today he lives with the same philosophy as his mother.

Harpham says healthy survivorship is to find how to make life the best it can be, physically, emotionally, spiritually, and knowing what choices you have so you can prioritize where you will spend your time and energy. Happiness is not automatic, she adds, saying you have to create the environment for happiness to occur.

For Will, it’s simple: “Who knows what the future holds,” he says. “But I have her today.”

Be the first to discuss this article on CURE's forum. >>
Talk about this article with other patients, caregivers, and advocates in the Survivorship CURE discussion group.