Naturally, newly diagnosed patients with multiple myeloma have a lot of questions for their physicians. Dr. Joshua Richter had the time to discuss some of them.

Newly diagnosed patients with multiple myeloma will naturally have many questions for their physicians, questions that they can receive answers too even if researchers do not have an answer yet, according to Dr. Joshua Richter.

Richter, an assistant professor of medicine at the Tisch Cancer Institute at the Ichan School of Medicine in Mt. Sinai Hospital, presented on the diagnosing testing and staging of newly diagnosed patients with multiple myeloma at the 2019 CURE Educated Patient Summit on Multiple Myeloma in Charlotte, North Carolina.

In an interview with CURE ®, Richter also had the chance to go over some of the many questions that newly diagnosed patients with multiple myeloma will have.

One of the biggest questions is how did I get this, and how long have I had this? When people ask me how they get it, the reality is we don't know. For some cancers, we're able to clearly delineate an exposure, or some other component of their medical history, that led to this formation but for most patients with myeloma, we really have no idea how they got it.

The big question about how long they've had it is another really nebulous one. We now know that essentially everyone who develops myeloma had some earlier version of a benign process called M-GUS.

People could have had these benign processes for years, if not decades before they actually manifest as myeloma. So, the actual symptomatic myeloma itself may have only been occurring for a period of weeks to months, but the whole process could have been there for years.

Other questions that are asked are, can I pass this down to my children? Is this a hereditary disease? Many people think about hereditary diseases like breast cancer where you see a mother, and a sister, and a child all have breast cancer. In general, we classify cancers as either sporadic or hereditary. Sporadic are just cancers that pop up, and hereditary are ones that are passed down. In myeloma, the majority of it is sporadic, most people do not pass this down.

There are a handful of clusters of familial myelomas where we see this in certain families, but it's very, very rare. In general, if you have a first-degree relative that has myeloma or a similar disorder, your first-degree relative, so brother, sister, mother, father, son or daughter, have a slightly higher incidence of getting this over the general population, but where the general population may be one in 100,000 for you, it may be two in 100,000. So, I say instead of one needle in a haystack, it's two needles in a haystack, overall, so very unlikely to develop something like that. 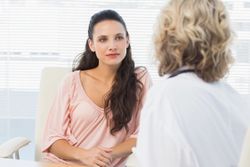