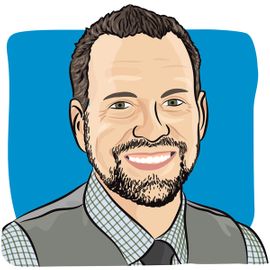 Justin Birckbichler is a fourth grade teacher, testicular cancer survivor and the founder of aBallsySenseofTumor.com. From being diagnosed in November 2016 at the age of 25, to finishing chemo in January 2017, to being cleared in remission in March, he has been passionate about sharing his story to spread awareness and promote open conversation about men's health. Connect with him on Instagram @aballsysenseoftumor, on Twitter @absotTC, on Facebook or via email justin@aballsysenseoftumor.com.

I recently introduced you to my Band of Ballers - a great group of guys who share my singular mission of testicular cancer awareness, along with singular testicle status. In this episode, we meet a another pair of men - with half a pair among them. (To be fair, they do have one complete sack, if you count the prosthetic one of them has.)

In the spirit of making a bigger influence, in mid-2015, he also founded an international advocacy network whose mission is to advance the practice, research and education in the field of testes cancer: Center for Advocacy for Cancer of the Testes International - CACTI. The goal of CACTI is to make sure new testicular cancer patients will have access to qualified healthcare personnel who can make a quick and accurate diagnosis and offer better treatment options, thereby minimizing the severity of their treatment and reducing any long-term side effects, which will ultimately allow them to live better lives.

He's also committed to raising awareness in other, creative ways. He has come up with the idea of creating products (related to men's genital region) where the majority of the proceeds would go to advance the practice, research and education of health initiatives for men. In 2018, Rouse Condoms and Pariah Underwear were launched. Over 50% of the proceeds from both brands are donated to men's health initiatives plus every package comes with a testicular self-exam flyer.

Dave is the closest thing to Superman in this Band of Ballers - he won a New York State Natural Bodybuilding Title in 2001.

A few months after winning the title, he felt something different in his groin. A senior in college, he remembers walking into the Health Services office.They got me right in and then immediately sent for an ultrasound at the hospital - where they diagnosed him with testicular cancer. His first thoughts? "How fast can I recover from the orchiectomy and get back to the gym?"

Five years later, he started to notice changes in his other testicle.

As he says, "You might think having one diagnosis already… I would be eager to get it checked out. But denial is a powerful thing, my friends. I waited several months (with continued atrophying) until my routine check-up.

It was a whirlwind of a few weeks. CT Scan. Followed by MRI. Followed by immediate attempts to determine sperm count. "None present." Then immediately into surgery. Soon thereafter, I started radiation treatments, covering my pelvis through my abdomen. I remember feeling dirty inside - like my body was betraying me. Still, I just wanted to ignore it all."

While Dave wanted to just continuing ignoring his symptoms, he realized it was much harder to do so after surviving cancer twice. In a moment of breakdown, he finally admitted how broken he felt. But this started to change his life. People didn't judge him in the way he expected - quite the opposite, actually. They thanked him for being open and told me how strong he was to be vulnerable.

This year, seventeen years after his initial diagnosis, he had honor of giving a TEDx Talk, entitled "The Science of Living". According to him, "It was the most honest I've been about my experience as a two-time testicular cancer survivor."

In his talk, he discusses his journey and how it prompted him to form a team of inspired survivors and caregivers at his company, GRYT Health (pronounced "grit"). Together, they have built and run the free Stupid Cancer app that's used by cancer survivors and patients around the world. The purpose for the app is to help others live on their terms - not under the traditional narrative of 'helpless cancer patient'.

Even though he was hesitant in sharing his story for a long time, he now offers these final words of advice: