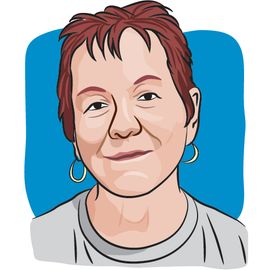 In July 2011 Barbara Carlos was diagnosed with stage 3 breast cancer. A resident of Hawaii, she works in administrative support at a college and has retirement as her career goal. Music keeps her sane, as side effects of chemo and radiation linger. Overweight since childhood, she keeps trying to lose the estrogen-laden fat that her cancer loves.

A cancer survivor's visit to the dentist turns into a medical issue.

A couple of years ago I had an abscessed tooth. I didn't know there was anything going on there because one of the advantages of neuropathy is that you don't feel pain. However, when routine dental X-rays were taken, the huge abscess smiled for the camera. I didn't feel a thing. I went off to the endodontist for a root canal. No problems there. I had no problems for two years.

Some of my nerves have been healing and I now have feeling or partial feeling in different parts of my body. It's not like before chemo, but it's nice to be able to pick up a paper clip by touch instead of having to watch my hand do the task. Over my lifetime, I have invested quite a bit in my mouth, so I am good about a dental checkup every six months. A few months ago, occasionally I would feel a twinge of something in my mouth, but it was so fleeting that I couldn't zero in on it. It seemed like a tooth was trying to send me a message. I don't speak tooth, so I couldn't figure it out. I went to the dentist to have the message interpreted. Guess what? I had another abscess in the same place! Again, I couldn't really tell because I couldn't really feel it.

Back to the endodontist for a diagnosis of a failed root canal. Clicking on my friend Google, I found that this does happen, albeit a small percentage of the time. Lucky me! Interestingly my endodontist also noticed necrosis of the bone in my upper jaw. Google searches showed me that meant part of my jawbone not only had died, but it wasn't even there anymore. Looking at the X-rays, there was a big space where bone used to be and should be but wasn't. The endodontist had seen it happen to others who had radiation. I even found a mention of jawbone necrosis after radiation on my friend Google. Normal treatment would be to remove the tooth. The tooth is in the front of my mouth. I didn't like that idea. Since my aromatase inhibitor has the delightful side effect of bone loss, this created an issue for me. My endodontist is a very nice guy and he spent two and a half hours carefully retreating the tooth to save it for me. All was good in my world.

Two months later I noticed a funny taste in my mouth. Investigation revealed unpleasant liquid oozing from the gum where the problem tooth was located. Back to the endodontist. This was definitely a problem and he sent me to an oral surgeon with a recommendation that the tooth be removed. During our conversation, he mentioned the possibility of removing just the root. I googled again and liked that option.

Off to the oral surgeon. He wanted to remove the tooth right away. I brought up the subject of removing the root only. He was hesitant, but I think he quickly figured out he had a patient who wasn't going to agree to that without a thorough explanation of reasons to do so. He did another exam, X-rays and a CT scan. He told me he would remove the root only since the gum and the rest of the tooth were OK, but he wanted me to understand that in another 20 years I would probably need the tooth taken out. I burst out laughing! I told him "In 20 years I'll probably be dead and I won't care!" An appointment was made for this major project.

I have dental insurance which covers part of my dental visits. When I returned to have the root removed, one of the dental technicians told me that the oral surgeon wanted to do a biopsy which wouldn't be covered by my dental insurance. Biopsy is a word that should be used cautiously around those of us who have had cancer. I could never play poker because what I think and what I feel register immediately on my face. Inside I was screaming "Biopsy? Whaddaya mean I need a biopsy?" but my mouth didn't move. The technician took one look at my face and quickly ushered me into an exam room. She gave me a few minutes to compose myself and then the doctor came in to explain that he thought, given my medical history, that a biopsy of the area would be a good idea. By the time he finished I had calmed down. I gave the receptionist my medical insurance info for the needed biopsy pre- approval. It was approved a week later, and I returned for the apicoectomy (that's a fancy word for removal of the root of the tooth) and the removal of the problem area for biopsy. This meant I had a big space in my jaw where the root of the tooth, the dead part of the jawbone and the part of the tissue and bone that was taken out for biopsy all used to hang out. Like me, you are probably wondering what would happen to that empty space? Not to worry. There was a solution to the problem. The oral surgeon filled the space with liquid cadaver bone. That was the first I had ever heard of liquid cadaver bone. I didn't ask any questions. I guess I didn't want to know too much about what cadaver it came from.

I have had six months to get used to the idea of liquid cadaver bone injected into my jaw and I have some questions to ask when I return to the oral surgeon next week. It takes that long for the bone to solidify and attach itself to the existing jawbone. I hope it has done so and the healing is complete. Either way, you can be sure I'll be sharing the results of that visit in a future post. As for the biopsy results, I saw my primary care physician a week after. The results were "Benign blah blah blah intact sac blah blah blah blah." Since the first word was the only one that mattered I really couldn't hear the others.