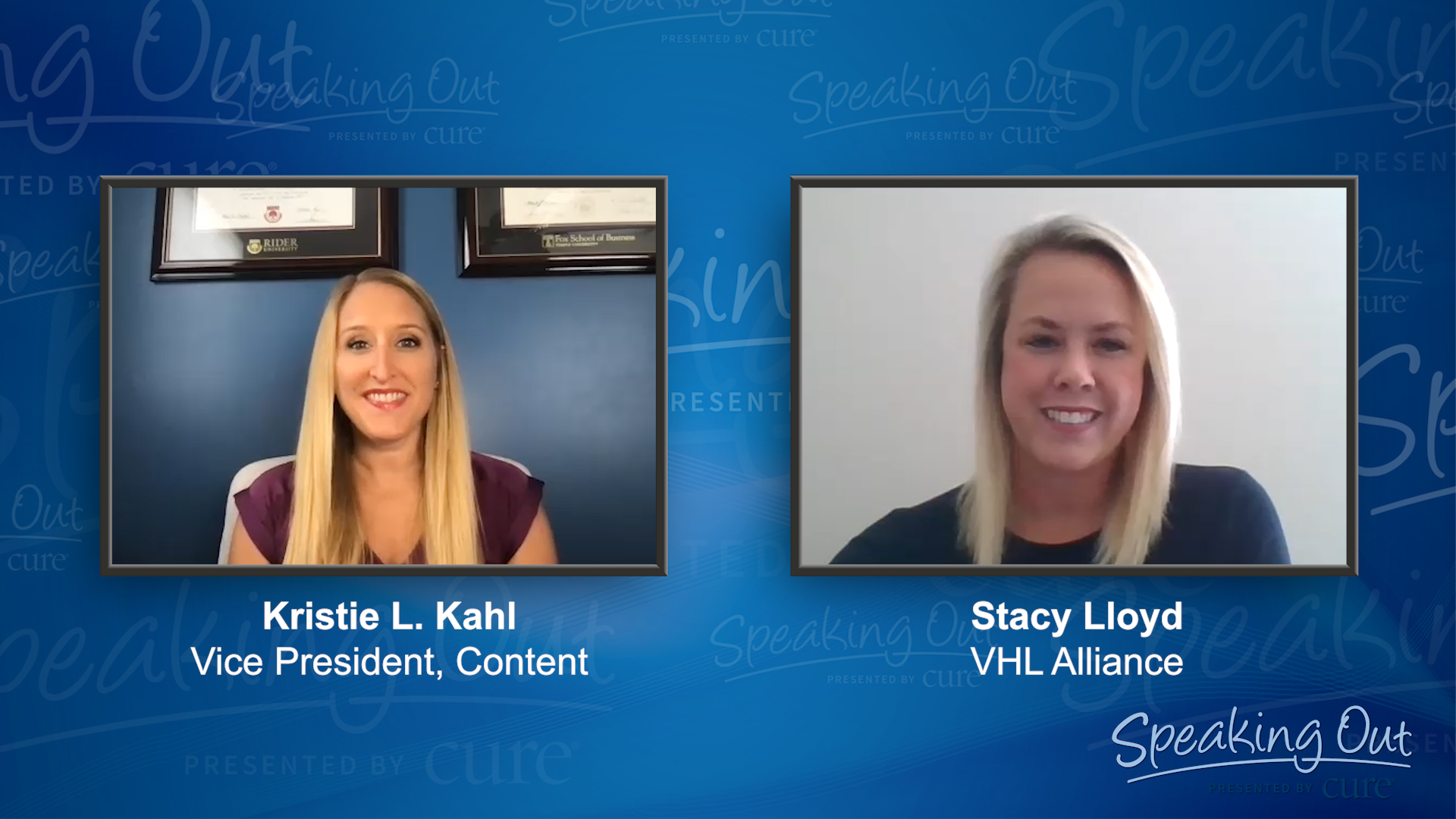 As a part of its “Speaking Out” video series, CURE spoke with Stacy Lloyd on behalf of the VHL Alliance, about discussing hereditary cancer with family members and how a diagnosis can lead to earlier surveillance for the disease.

Kristie L. Kahl: Can you explain what the genetic risk is when it comes to VHL?

Stacy Lloyd: There is a 50/50 chance of the VHL being passed down from parent to child. Only about 20% of VHL cases are actually that de novo kind of first-in-family.

Kristie L. Kahl: Why is it important to talk about hereditary conditions, especially when it comes to a cancer diagnosis?

Stacy Lloyd: So, VHL isn't something that goes away. It's truly better — and maybe this is personal feeling —but I do feel very strongly that it is truly better to know what you're dealing with and be empowered as a patient to take care of yourself so that it doesn't get to a point where you are in an emergency situation. For example, not getting those regular eyes exams could result in partial or full loss of vision. So, family members that are at risk to also have this disease should know and be able to seek confirmation through that genetic testing so that they can take care of themselves and detect any tumors early on.

Kristie L. Kahl: If someone has a family history of cancer, why is it important for them to make sure they're also getting genetic counseling?

Stacy Lloyd: I feel like it's a little bit of a personal decision, and some people are open to it and welcome it, other people don't find as much value. But I think it can be a really powerful tool for patients to educate themselves on the disease and the genetics behind it, what their risk is. And this is important for VHL, but it’s also important for other cancer syndromes, too. (They can learn) what they can expect throughout their life dealing with this (condition) and it just is a way to really empower you, as a patient, empower your family, be able to have informed conversations about the disease and the management of the disease that will ultimately be with you for a lifetime as it stands today.

Kristie L. Kahl: How can one family member’s genetic testing results impact an earlier diagnosis for another family member?

Stacy Lloyd: Once VHL is detected in the family, it does prompt others to get tested. And once confirmed, that surveillance can start. Before you have that diagnosis, you might not be able to get all of the actual surveillance that's needed to cover all of the manifestations, whether that be an insurance issue, whether that be a physician that feels more comfortable doing all of those different tests once you have a confirmed diagnosis. So some of that really needs to happen before you can even get the surveillance that might be needed to track some of this.

An early diagnosis can result in that higher quality of life, being able to know and watch some of the tumors that might be small as they grow, instead of running into what could be an emergency situation. … Additionally, any children can be tested at an early age. And that really is super important. I feel very strongly about regular surveillance for children. I was 10 when my first manifestation happened. So, it doesn't always wait until a certain age or it's not something you might just have to deal with when you're older. So, it's really important to start that early. And kids also don't know what's going on with their bodies. So, they may not even realize that something's wrong. So that's something I think that is so important about the genetic testing and getting that early and often, and having those conversations as part of a family so that you can get that diagnosis early. If it's there, start watching out for things as early as possible.

And something else, I think that that sets a tone for the rest of that child's life. Like, I take care of myself. I've been doing this for so many years. It's a part of my routine, right? And I think setting those early habits of taking care of yourself and getting that surveillance and routine testing early on is really important for people over the course of their lifetime to continue to make sure that they're watching out for these (manifestations).

Kristie L. Kahl: Based off of your experience, do you have any advice for others to start that family discussion?

Stacy Lloyd: It’s not an easy one. At some point, you're not always going to get the response that you want. But I think as much as you can set an example and be that person that is doing the right thing for your health and being supportive. You can only do so much. But I think it's just worth having some transparent, honest communication because it's in the best interest of your family to have those conversations. Just being empathetic and caring about the conversation and being respectful of people's choices, is really all you can do.

Expert Addresses Disparities in Lung Cancer Screening, What More Can Be Done
Advertisement