Freedom: Perspectives from a Cancer Survivor

“Freedom’s just another word for nothing left to lose.”

I’d never understood the words to the song “Me and Bobby McGee”, popular during my twenties. How could you be free if you didn’t have a house or money or clothes? Wasn’t that the opposite of freedom?

Thirty years later, I was forced to realize I’d been looking at it all wrong. I’d reached the point where I thought I was going to die, and when you reach that point, you truly have nothing left to lose. Facing my own death liberated me and gave me the freedom I’d never allowed myself before, like freedom to do the things I’d never dared to do and freedom to be me. I grew up in a restrictive, dysfunctional household. The best way to survive at school and at home was to be quiet and invisible. I was the good child, shy and responsible but scared to try anything new. I found comfort in the familiar.

Then, at age 53, with no warning and no family history, I was diagnosed with invasive lobular breast cancer. My research wasn’t comforting because there was very little information available about that kind of cancer. I was going to die. I knew it. I began to assess my life. What had I accomplished? What did I still want to do that I hadn’t done and might not get the chance to do? I realized immediately that the way to get the most out of what time I had left, however long it was, was to use my newfound freedom and change a single word in my vocabulary. All my life I’d said “no” to opportunities that had come up. If I was going to do what I wanted to in a limited time, I had to learn to say “yes,” to embracing the unknown and seeking out adventures because really, what did I have to lose?

If my cancer had not been diagnosed and treated, I would have never have had the opportunity or the time to try something new. I’d almost lost out. Now I was free. At first it was scary. When I said yes, my mind snapped to attention. “Yeah but…” and “What if…” Words that would have stopped me cold before. The new me, however, answered these dire warnings with, “It doesn’t matter ‘what if...’ or ‘yeah-but...’ if I’m going to do it, I need to do it now. I might not get another chance.”

So when a retired cop in my writing group asked me to edit his articles, I said yes! When he asked me to go on interviews and take backup photos, I said yes! When we were asked if we wanted to ride along on a night-time drug bust, I said yes! (But Mama didn’t raise no fool—I stood back, away from the action!) When a story I was writing began to lengthen into a novel, my writers’ group asked if I could keep it up for 200 pages. I said yes! One of my new goals was to make some kind of difference before I left this Earth, so I needed to try. My young adult novel won a national contest, was published by a major publisher, and translated into German, where it won another award. Did it make a difference? Yes! According to the letters and emails I received from middle school readers, it definitely did.

I’m glad because I could just as easily have given up. When my sister asked if I wanted to go Ziplining, I said yes and applauded myself when I stepped off the first platform; the old me was afraid of heights and certainly never would have walked off into nothingness above the treetops. As an exercise in being creative, my writers’ critique group wrote about our perfect day and cut out magazine pictures to illustrate it. I was the only one who said “yes” to my perfect day, earned the money writing, and took my husband on a cruise where I lounged in satin pajamas, read and ate chocolate-covered strawberries. A cruise through the Panama Canal? Yes! We also saw cliff divers in Acapulco, colorful bazaars in Mexico, and ancient Spanish forts.

What’s next? A hike through Death Valley, the glass walkway over the Grand Canyon, a night on the Queen Mary…the list goes on. While these may seem tame to many, for the shy, quiet woman who answered the surgeon’s phone call that afternoon almost 18 years ago, these are wonderful adventures. The feeling that I had nothing left to lose gave me the freedom to change “no” to “yes!” and opened up a world of possibilities, and allowed me to live my life to the fullest. 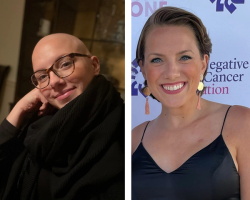