Any diagnosis of cancer is devastating, but when a child is involved, the unfairness of it all seems to hit just a bit harder. When caught ear;ly there is a 90% survival rate.

Any diagnosis of cancer is devastating, but when a child is involved, the unfairness of it all seems to hit just a bit harder. This last week, the small community where I live was rocked by the news of an eighth-grade girl being diagnosed with late stage Hodgkin Lymphoma. Today, I’d like to take some time to talk about Hodgkin Lymphoma, a disease that will strike an estimated 8,110 people in the US in 2019.

To understand this type of cancer better, first we need to talk about a little bit of biology. Lymphomas are cancers of the lymphatic system. The lymphatic or lymph system is a part of our immune system, and within this system there are two main types of fighting cells – B cells and T cells. Hodgkin lymphoma typically originates in the B lymphocytes. One of the terribly frightening things about lymphomas, however, is that they can set up camp pretty much anywhere in the body, as our immune system is all over our body. They do tend to pop up in locations with the greatest concentrations of lymph cells – such as lymph nodes, the spleen, the digestive system, and the bone marrow.

One of the most common symptoms of lymphoma are swollen lymph nodes. These lymph nodes usually don’t hurt and may grow in size or spread to other nodes in the area. It is important to note that lymphoma is not the most common cause of swollen lymph nodes – the most common cause is an infection. Lymph nodes that are caused by infection are typically painful. Other important symptoms to know are fever that won’t go away without having an infection, drenching night sweats, and unexplained weight loss – these are called “B symptoms.” There are also several non-specific symptoms, meaning that they can indicate lymphoma, but they are not specific to lymphoma. These include fatigue, itching, cough, chest pain, difficulty breathing, and loss of appetite.

If you or a loved one are diagnosed with Hodgkin lymphoma, the good news is that when caught early (stages I and II) the 5-year survival rate is about 90%. The survival rate falls to 80% for stage III disease and about 65% for stage IV.

While staging of lymphomas follows the stage I-IV system that most of us a familiar with, it is also divided by “prognostic factors” that help treatment teams deem the disease as either having a likely “favorable” or “unfavorable” outcome. The American Cancer Society tells us that the following factors are deemed unfavorable:

The first line of standard treatment for Hodgkin lymphoma is chemotherapy and radiation. Chemotherapy is typically given in cycles, and radiation is often used after chemo. Immunotherapies have gained prominence in the treatment of lymphomas, as they target the cancer cells, with fewer adverse side effects that standard chemo and radiation. Monoclonal antibodies and immune checkpoint inhibitors are both used, and often in conjunction with chemo and radiation, for diseases that are in stages III and IV, or recurrent disease. Lastly, high dose chemotherapies and stem cell transplantation are utilized in patients who suffer from disease that won’t go away completely, or that has recurred.

The amazing people at both the Leukemia & Lymphoma Society and the Lymphoma Research Foundation offer support and research funding seeking a cure to this dreaded disease. Also take a look at our page dedicated to Local Cancer Resources to see what help may be available in your area.

As always, much love, many prayers, and abundant blessings to all of the warriors out there! 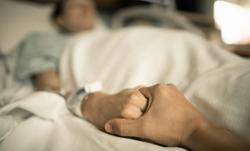