The FDA granted Keytruda a priority review for the treatment of some patients with urothelial carcinoma.

Keytruda (pembrolizumab) was granted a priority review by the U.S. Food and Drug Administration (FDA) as a treatment for cisplatin-ineligible patients with locally advanced or metastatic urothelial carcinoma, according to Merck, the developer of the PD-1 inhibitor.

The priority review was based on data from the open-label phase 2 KEYNOTE-052 study, which was presented at the 2016 ESMO Congress. In first 100 patients enrolled in the study, the objective response rate (ORR) with Keytruda was 24 percent, which included a 6 percent complete response (CR) rate. After a median follow-up of 8 months, the median duration of response was not yet reached (range, 1.4+ to 9.8+ months), and 83 percent of patients responded to therapy for at least six months.

Under the priority review program, the FDA will make a decision on the supplemental biologics license application (sBLA) for Keytruda four months faster than a standard review. The deadline for the approval, under the Prescription Drug User Fee Act, is June 14, 2017, according to Merck.

“The activity that we’ve seen is clearly clinically meaningful, and there are durable responses that we are observing with these patients,” lead study author Arjun Balar, M.D., from the NYU Langone Medical Center, told CURE when he presented the results at the 2016 ESMO Congress. "I hope to see immunotherapy as a backbone upon which we develop other novel therapeutic approaches."

The phase 2 study enrolled 374 total patients, with an interim assessment for the first 100 participants. In the single-arm trial, Keytruda was administered at a flat 200 mg dose intravenously on day one of each three-week cycle for up to 24 months. The median age for the first 100 patients was 75 years (range, 44-94), and 87 percent had visceral metastases at baseline. Patients had an ECOG performance status of 3 (1 percent), 2 (45 percent), 1 (30 percent) and 0 (24 percent).

"Using the CPS, we aimed to find a level of expression where we enriched greatly for responses but also minimized the false-negative rate," said Balar. "In essence, what we found was that the PD-L1 expression CPS cut point of 10 percent or greater, seemed to enrich for responses really well."

"We did see some notable immune-related adverse events, such as colitis, nephritis and pneumonitis, in patients enrolled in this trial," said Balar. "But the overall frequency in the first 100 patients was very low, which means only one or two patients had developed each one of those toxicities."

In addition to the frontline indication, the FDA is also considering an sBLA for Keytruda as a second-line therapy for patients with urothelial carcinoma following a platinum-based agent. The deadline for this application is also June 14, 2017.

Outside of urothelial carcinoma, applications for Keytruda are also pending for the agent as a treatment for microsatellite instability-high cancer and Hodgkin lymphoma. The FDA has approved Keytruda for melanoma, lung cancer and head and neck cancer. 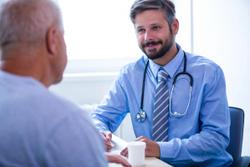 The Superhero Oncologist Who Saved My Friend From Cancer

Surviving My 'Cancerversaries' Reminds Me of Those I Have Lost