One of the more prevalent misconceptions about inherited cancer mutations is that genetic testing is only for White people, according to a genetic counselor.

There are several common misconceptions about who should be offered genetic counseling or genetic testing for inherited cancer mutations, according to an expert.

In fact, many of these mistaken beliefs have a negative effect on minority populations, according to Dena Goldberg.

Goldberg, a genetic counselor and founder of Dena DNA in Los Angeles, addressed the disparities and common myths that surround genetic testing and inherited cancer mutations at the 12th Annual Joining Forces Against Hereditary Cancer Conference.

“Something that a lot of us in genetics and as patients have come across are different misconceptions about who should be offered genetic counseling or genetic testing,” she said during her presentation.

One of the more prevalent misconceptions, she noted, is that genetic testing is only for White people. Another misconception, which Goldberg said she surprisingly saw in a medical journal, is that the only people who ever come back with positive results from genetic tests are women of Jewish ancestry.

Moreover, Goldberg cited experiences she has had in her clinic where patients have said their doctors told them they didn’t need genetic testing because they were Black, Asian or other ethnic minorities.

“These misconceptions are rampant in this community,” she said.

Frequently, Goldberg explained, clinicians and researchers use this “popular notion” of race to make guesses or inferences regarding a patient’s genetic ancestry to predict whether the person carries a specific risk factor that influences health.

“For this to work, first of all, race must correspond to genetic ancestry, which it doesn't; and ancestry must be predictive of genetic risk. And it's not always,” she said.

Goldberg continued and noted that although race and genetic ancestry overlap and may affect a person’s health, people need to realize that they are still separate concepts. And while they can both be useful in epidemiological studies; they need to be used appropriately.

“While race captures some information about genetic ancestry, particularly in the U.S. populations, it actually often fails to account for the mixture and population structure in a lot of these communities and groups,” she said. “Bottom line … a person's race should never exclude them from genetic testing because categories of race are better suited to discussing shared cultural, geographical, and social factors. And those who identify as being part of a specific ethnic cultural group, they tend to share cancer risk factors with others in that group.”

Goldberg noted that there are several studies, that when looked at together, show that BRCA mutations are remarkably similar among women who undergo genetic testing, regardless of their ethnicity or ancestry.

“With the exception of Ashkenazi Jews that (was talked about earlier), in most of the ethnicity and ancestry groups there are about equal rates of people that are positive for hereditary cancer,” she said. “And some studies even showed that African Americans had slightly higher positive rates as well, which is not something that people usually think about.”

Goldberg then asked that if all the ancestor groups have similar positive rates when they are tested for hereditary cancers, then why is there a difference in the number of women in different racial or ethnic groups for receiving genetic testing.

She continued and noted that there are several different reasons. No. 1, according to Goldberg, is provider awareness and the lack of referrals. Many providers or physicians may not be aware of the importance of referring everyone for genetic testing, regardless of what group they belong to, she said. Moreover, there are differences in health care access, socio-economic barriers, medical literacy and trust in the medical system.

“All these really contribute to there being an imbalance in who really gets referred, and then receives genetic counseling and genetic testing,” she said.

Eighty-one percent of the population that makes up genetic databases today are people of European descent, according to Goldberg. And although that is better than the 96% from a few years ago, the numbers are not representative of the world’s populations.

“It's very skewed towards European groups,” she said. “This is a problem because it causes disparities.”

To reduce the prevalence of misrepresentations, Goldberg suggested a plethora of initiatives including analyzing why researchers have a preference of recruiting patients from European populations and incentivize research that comprises diverse patient populations.

I’m Not White, Can I Still Have a Mutation?

The presentation concluded with Goldberg asking the audience if they could have a genetic mutation regardless or their race or ancestry. She ended by saying that people of all races, ethnicities and ancestry groups can have a risk for hereditary cancer and that everyone can benefit from genetic testing.

What People With Cancer Should Know About COVID-19 Vaccine Boosters 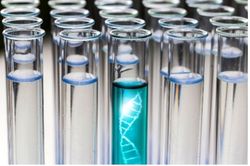 The Promise of Liquid Biopsy Tests for Detecting Cancer Earlier