"My dream is for the day when all cancer patients can have testing to find out what treatment approach might work best for them&mdash;so that a patient with a specific genomic profile doesn’t miss an opportunity to get a potentially life-saving treatment when it’s out there."

2016 promised to be a year of milestones and celebrations. All of our children were in college—our two daughters were graduating, and our son was just finishing his first year. However, on Good Friday of that year, a routine oncology appointment was anything but routine. My tumor markers were highly elevated and well outside the normal range. There was little doubt: I had metastatic breast cancer.

The months that followed were filled with ineffective therapies. A year that had begun with so much hope and promise was looking very much like it could be the last full year of my life. Tumor markers for my stage 4, triple negative, breast cancer soared. By the end of 2016, I weighed less than 100 pounds and realized I probably had only months to live. I wrote farewell letters to my husband and each of my three children, I shared end-of-life wishes with my family, and I made peace with God. I did not want to die, but I was as ready as I could be.

The symptoms of a malignant small bowel obstruction reached a crisis point that November. I found it impossible to eat or drink and was referred to a doctor at UCSD’s Moores Cancer Center for surgery. In reflection, this turn of events seemed to be the hand of God in the glove of circumstances, as this doctor was also the principal investigator of the &#8203;I-PREDICT (Investigation of Profile-Related Evidence to Determine Individualized Therapy) clinical &#8203;trial. &#8203;This precision medicine trial utilizes genomic testing to identify mutations in each individual’s tumor and, based on these insights, drugs were chosen specifically for each patient. I was eager to join this trial as it clearly felt like my last hope—my next stop was hospice care.

My oncologist explained that genomic sequencing had identified a biomarker suggesting that I might respond to a form of therapy that was not standard of care for breast cancer. I felt a glimmer of hope, only to learn my insurance company denied coverage of the genomic testing. On top of that, just seven days before I was scheduled to receive my first infusion, I learned my insurance company had also denied authorization for my treatment because the therapy selected was not considered standard for my cancer type. This was truly heartbreaking.

But thanks to a flurry of activity going on behind the scenes, &#8203;within the span of that one week, I received access to the therapy under a compassionate use program. On&#8203; February 13, 2017, I sank into my infusion recliner and thanked God for access to this therapy. My body was very thin and weak, but my spirit soared with hope.

What happened next was unbelievably wonderful. After just two infusions, my tumor markers dropped by 75%. After eight weeks, my CT scan suggested a complete response to therapy. For the past two years, I’ve been without any evidence of disease. I have no words to express the gratitude or joy I feel because I am alive. I have savored milestones I was certain I would not live to see. From our family’s Thanksgiving trip to Hawaii, to my son’s graduation from college, to a family reunion out of state, each is a beautiful part of my bucket list.

This extraordinary story has not gone unnoticed. It has been heralded in the Washington Post, the San Diego Union-Tribune, and even National Geographic Magazine. New approaches to personalized medicine, like the one studied in I-PREDICT, are rapidly changing the paradigms of cancer treatment. My dream is for the day when all cancer patients can have testing to find out what treatment approach might work best for them—so that a patient with a specific genomic profile doesn’t miss an opportunity to get a potentially life-saving treatment when it’s out there.

To Tell or Not to Tell About My Mastectomy 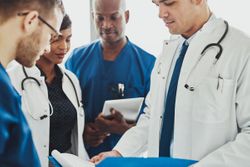 Lessons from COVID-19: How to Support those Facing Serious Health Challenges Like Cancer

Newly Diagnosed with Cancer? Remember You’re 'Not a Statistic'