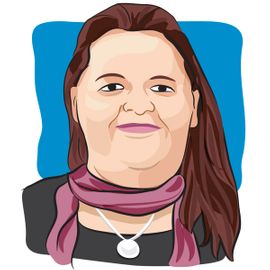 Kim is a nursing student who is hoping to find her place amongst the phenomenal oncology nurses and doctors who cared for her sister. She loves reading, volunteering and enjoying the outdoors of Colorado.

Cancer is temporary, but family is forever.

While my sister struggled through cancer, those close to her and those who barely knew her all knew of the war that was being waged. Now that she is in remission and we tell people she had cancer, as opposed to she has cancer, the approach they take is very different. I think people don’t understand that although in remission, life for us is largely the same. Cancer has left remnants that will forever remain.

The remnants that remain because of cancer go beyond even that of her physical conditions. For me, the hardest thing is just how much we both have changed. The dynamic that we had before changed when I took on the role as caregiver. When she was diagnosed, we did not have a good relationship. Honestly, even though we were living together with my family, we barely had a relationship. Growing up, we absolutely hated one another. She may have chronologically been the older sister, but it never seemed to work out that way. As we got older, the distance that separated us seemed to get bigger and bigger. Shifting into a role of a guardian for her did nothing to help with it.

As we’re different people, we approach things differently. So it comes as no surprise that through her treatments, we haven’t always seen eye-to-eye. As time wore on and her condition worsened, decisions still needed to be made, whether she was capable of making them or not. When I made choices, I was doing what I thought to be in her best interest, but that does not mean that I don’t carry guilt from the ones that I made. It pains me that some of my choices resulted in suffering for her. Since she’s the patient, she has a perspective that I will never be able to understand, just as I’m the caregiver and have a perspective that she will never be able to understand. What helps me is that she is now in remission. I don’t think I would have the same stance on the past if she wasn’t.

It is hard because our “sisterly” relationship was built on cancer. Though something terrible, it has meant that we spent an incredible amount of time together these past two years — probably more so than we have since we were both little girls playing Barbie dolls. Just because the memories we made were because of cancer, that does not mean that they should be invalidated or tarnished, but for her, it seems that they are. Though sisters, we do not share all that much about our personal lives with each other.

In contrast, I can tell you exactly what she needs when she is in pain, what to expect when she not in a good mood, and what music to play for her nightmares. I can tell you that she wants spaghetti and meatballs after every chemotherapy treatment, and when she sneezes three times in secession, she will throw up shortly thereafter. I can tell you that Woodstock is required for port accessing. I can run off all of her medications, note dates and times these past two years of all that has gone wrong, tell you her ANC like it’s the temperature outside, name every hospital she has been in, when and why. I know the doctors that she would never like to see again. And that no matter how many times you tell her, she will never understand medical terminology.

She will always be my first patient. She will always be the one that jumps out in my mind when I recall learning about oncology. She’s the one I will always know more about than the rest, and she is the one that I will never forget. And no matter how many stats I can list or how many problems that I can solver for her, there is one thing that I can not do. I am not sure that I know how to be a sister to her anymore. So many things have changed and while it has been my choice to have it that way, it has been two years of being more of a caregiver than a sister. But since she is in remission, I often muse about returning to a sisterly relationship. Yet I do so cautiously, not wanting to return to the one that we had. But instead, I want to focus on building a better relationship that goes beyond cancer.

With cancer having lost, and us having won, I wonder what that means for the two of us. We are still polar opposites that have little to nothing in common. Our friends flow in different circles and aside from being sisters, we don’t share much else. I never knew what to expect in terms of her illness. But I always knew what to do in a moment of crisis. No matter what happened or why, that I would be by her side through it all. But as we look at moving to different cities and move on with our lives post-cancer, I wonder what is next for us. No matter what has happened in the past or where life leads us next, I hope that we both remember that above all else, we are sisters.